TVT’s Oirish outsiders surprised us all with Group C victories over Spain and Italy, then added a 10-7 victory over Ukraine on Saturday night in a quarter-final epic. But the Italian boss – speaking through a County Kerry translator – cryptically admitted his side ‘may have to move Macgillycuddy’s Reeks’ if they are to progress any further, with Joachim Lowenbrau’s Germany ‘standing in the way of a grand finale’ against either Poland or France.

MacGillycuddy’s Reeks: Eire may have to move these mountains to beat Germany, according to Tony Van Trapp

There might have been a couple of stouts involved, but after his earlier fall-out with his own fans, former Eire international, Muncaster United legend and Daftown TV summariser Rory Keynote was having something of a love-in with the Oirish fans after that historic win over Ukraine.

Two goals each from namesake Bobby Keynote, Jack O’Seamus and Danny Duffy did the damage, a perfect display topped off by inspirational defender Johnny St Patrick’s winner amid fantastic scenes at the New Table of Dreams.

Plenty more pints of the dark stuff have been consumed in Downtown Daftown since that  shock result, but now Van Trapp’s side face their stiffest test yet. And as Lowenbrau said – similarly mystifyingly – in his press conference, “I am not looking to tolerate any  leprechaun shenanigans on the night’. So there you have it.

The following night there was further drama as Laurent Blancmange’s French France side saw off tournament co-favourites Espana to set up Thursday’s semi-final with Polska. And Spanish team boss Vince Del Busker was left speechless at the post-match conference, not least after a hat-trick for until-then out-of-form striker Ferdie Toreador was followed by a late double from Johan Cabbage.

Those two nail-biters were the culmination of a thrilling weekend in which Daftown house-guests the Beans and the Champions played their part in what Brazilian table football legend Hudson Oranges do Natimental – better known as Pilau – would no doubt have labelled the ‘Beautiferous Game’ if he’d actually accepted our tournament invite. 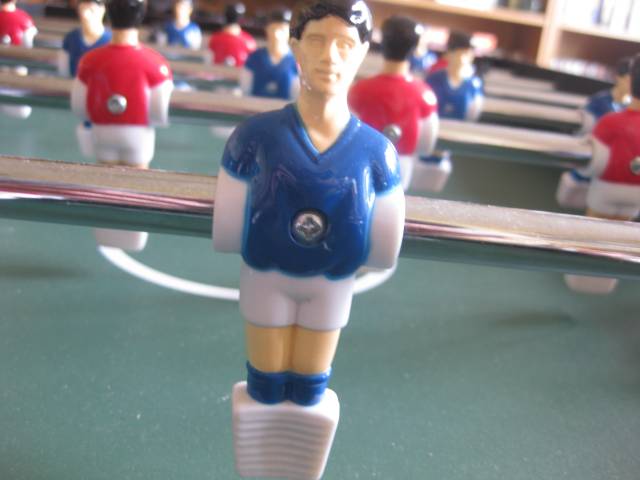 In the first quarter-final, Lowenbrau’s Germany were ‘lager than life’ according to national icon Frank Buchenboomer. The self-styled ‘Deutsch Jungen’ saw off Russian 10-6 – despite a great display from Roman Pavlovachunk – with Luke Podcastski scoring four goals on the night.

Poland kept their nerve in the second quarter-final for a 10-8 win over Orson Morsen’s Denmark, the opposition’s rousing choruses of ‘Wonderful Copenhagen‘ and assured performances from strike duo Dali Rommcom and Nicky Bandido not enough to put off determined Polish keeper and one-hit wonder Gooner Szczesny Hawkes in a stunning spectacle of table football.

And if each of those four victorious nations show similar form in the next two matches, we’re definitely in for further hyperboles and over-exaggerations from here. For sure.

* Stay in touch with https://writewyattuk.wordpress.com for the thrilling conclusion of the Yooro 2012 table football tournament.

A freelance writer and family man being swept along on a wave of advanced technology, but somehow clinging on to reality. It's only a matter of time ... A highly-motivated scribbler with a background in journalism, business and life itself. Away from the features, interviews and reviews you see here, I tackle novels, short stories, copywriting, ghost-writing, plus TV, radio and film scripts for adults and children. I'm also available for assignments and write/research for magazines, newspapers, press releases and webpages on a vast range of subjects. You can also follow me on Facebook via https://www.facebook.com/writewyattuk/ and on Twitter via @writewyattuk. Legally speaking, all content of this blog (unless otherwise stated) is the intellectual property of Malcolm Wyatt and may only be reproduced with permission.
View all posts by writewyattuk →
This entry was posted in sport and tagged Euro 2012, European Championships, Football, sport, table football. Bookmark the permalink.