Back to reality – the road from Stratford to Woking

Barely a week after the closing ceremony of the Olympic Games, there are concerns about Lord Coe’s ‘legacy’ being derailed by a ruling party he has so long associated with.

But while attempts continue to halt Michael Gove’s plan to loosen legislation regarding selling off school playing fields (check out http://www.38degrees.org.uk), the feelgood factor and inspiration for grass-roots sport and community involvement remains strong, as we look to unearth Team GB’s next generation of medallists.

The Paralympics should keep an international focus on London 2012, even if it might have been better placed before the big event. And I’ve already seen a whole load more cyclists and joggers out on the roads at night, which must count for something. But in the meantime – and beyond – we can all do our bit to ensure a healthy future via our own local clubs, whatever our sporting preferences.

In my case the prime passion has always been football, even though as one of Billy Bragg’s ‘victims of geography’ that involves a tidy trip back to my old neck of the woods in Surrey – to Kingfield, the home of mighty Blue Square Conference outfit Woking, an important part of my life since the non-league club’s 1980s’ forays into FA Cup giant-killing, Isthmian League domination and subsequent elevation to the national stage.

People are confused by that for some reason. ‘Woking?’ they say. ‘So what other team do you support?’ No-one else. Just the Cardinals. It’s my club. Even if I have lived 225 miles away from the ground for the past two decades. I have a soft spot for many more teams – for a variety of reasons – but Woking will always be my team, even if we are barely scraping into the top 100 clubs in England and Wales at present. And while we might not have won too much these last few years, there’s always the hope that we might do again some day.

I’m not too bothered if we never actually make it to the Premier League or Championship, as long as I can enjoy the odd match with friends and family and a quick pint before kick-off, hopefully storing at least a few classic moments in the memory bank for future days. There will be a few poor games this season and beyond, I’m sure, but there will also be afternoons and evenings to savour for all the right and wrong reasons.

In these days of big finance and Stock Exchange flotations for a brand earmarked ‘soccer’, I’m far happier to champion the cause of the little clubs out there, and that’s not being patronising either. I’m talking about any club, amateur or professional – not just football – where often-anonymous volunteers work their butts off in the cause of local sporting development, whether the short and long term reality of their work brings glory or not. In many cases this is for very little if any reward, yet these unsung heroes return week in, week out in a bid to to unearth the next international and hopefully enjoy the odd great moment along the way.

I’m not talking about a level where millionaire footballers with questionable morals turn up for training in their flash cars between nights on the town looking for fake-tan brides. Well, not all of them anyway (it does seem to be a major illness with this sporting breed). While there are plenty of wannabes at the level of the Beautiful Game I prefer, there’s a far healthier sense of reality on show most of the time. And I feel a greater affinity for a club where I can play a direct part in their success. Rather that than being just another punter in a replica shirt advertising a giant organisation paying more heed to the Far East and US trade sectors than those paying through the nose through the turnstile. 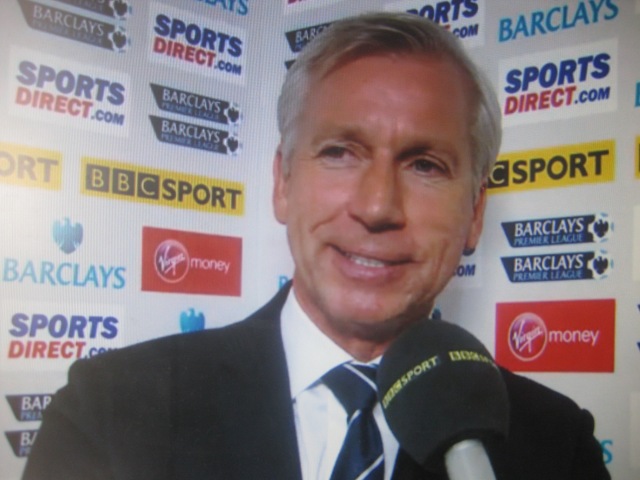 Shove Off: Alan Pardew was embarrassed by his touchline angst in the light of his own pre-match ‘Olympic spirit’ talk (photo courtesy of BBC Sport)

I’m not totally writing off the Premier League here, and there were signs in the opening week of the new football season that the Olympic message and ethos has had a bearing on at least some of those big time clubs. A prime example was that of Alan Pardew after Newcastle United’s opening day win over Spurs. Yet it was a rather embarrassed Magpies boss who explained to a Match of the Day reporter that there he was extolling the virtues of the London 2012 spirit beforehand and then during the match made all the wrong headlines for shoving a linesman in his eagerness to dispute a refereeing decision. Pardew later made his apologies to the officials and public, embarrassedly laughed it off and called himself ‘ridiculous’. That should have been the end of it. He still wound up with a two-match FA touchline ban though, and that also seems to be ridiculous.

Less you should feel I’m portraying my own beloved Cardinals as a shining paragon of virtue and great examples of that re-found spirit of sporting fairness, however, I have to report that my opening home game at Woking proved otherwise. 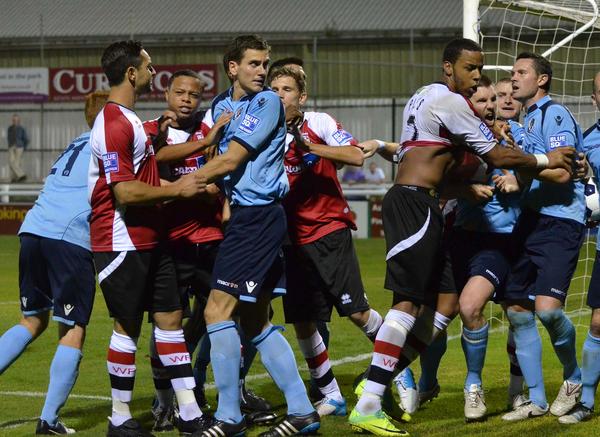 There were plenty of niggly challenges and moaning on the pitch, x-rated chants at the Kingfield Road End and good-natured frustration voiced on Moaners’ Corner as we saw a dogged 10-man Dartford side with a hobbling goalie try to hold on for a point. Meanwhile, my boys were deterred at every turn until a Giuseppe Sole penalty settled the affair, with argy-bargy and ‘handbags’ after the trip that led to the spot-kick leading to a brief period of what my pal Jim would call ‘a little bit of unpleasantness’ involving fans, players and stewards.

But that’s sport for you, I guess. It’s a contact sport and It can’t always be about those wondrous moments like Jess Ennis’ and Mo Farah’s late bursts to the front on the track at Stratford. That’s what makes it such an unpredictable and great game too. Sometimes it’s decided by an ill-timed challenge, a less than romantic deflection off an unexpected part of the male anatomy, or a total fluke of a shot.

I was back at Kingfield a few days after the win over Dartford to see my boys send a spirited Barrow side all the way back up to the end of the ‘longest cul de sac in England’ without a single point, their early promise and opening goal coming to nothing as the intense heat took its toll, the final straw being a delightful finish from Woking’s sturdy Portuguese-born striker Loick Pires that made it 3-1. 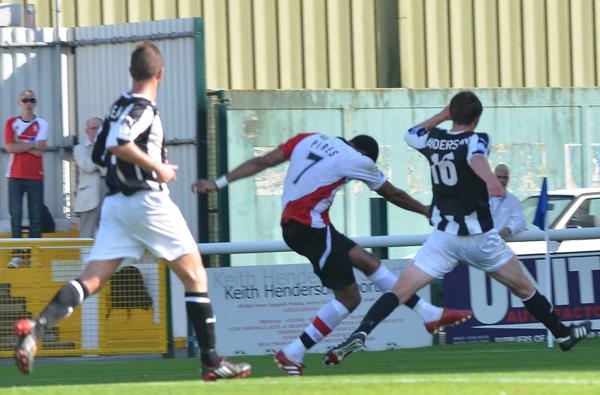 It must have seemed like a 1,000-mile return trip for a commendable Furness away following, let alone the 300 miles they had to endure to get home after a long and tetchy day out in suburban Surrey, experiencing temperatures in the thirties (at the first game I’ve been to where the ref pulled the teams over mid-way through the first half for a drinks break). But they’ll get over it and might even subject my team and several more to a similar fate this season. 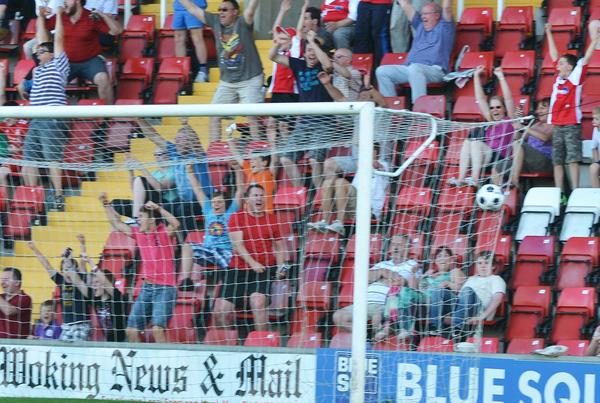 Fun In The Sun: The reaction to Pires’ decider against Barrow (photo courtesy of David Holmes)

That’s the beauty of football for me, perhaps in the same way as it for a hockey or rugby fan at turns frustrated and ecstatic about their own favourite waste of time. And just by turning up at your local club, using public facilities or safeguarding council and school playing fields, you’re doing your bit to encourage tomorrow’s sporting stars to come through and ensuring that sporting legacy continues.

A freelance writer and family man being swept along on a wave of advanced technology, but somehow clinging on to reality. It's only a matter of time ... A highly-motivated scribbler with a background in journalism, business and life itself. Away from the features, interviews and reviews you see here, I tackle novels, short stories, copywriting, ghost-writing, plus TV, radio and film scripts for adults and children. I'm also available for assignments and write/research for magazines, newspapers, press releases and webpages on a vast range of subjects. You can also follow me on Facebook via https://www.facebook.com/writewyattuk/ and on Twitter via @writewyattuk. Legally speaking, all content of this blog (unless otherwise stated) is the intellectual property of Malcolm Wyatt and may only be reproduced with permission.
View all posts by writewyattuk →
This entry was posted in sport and tagged Alan Pardew, Barrow, Dartford, Football, Gez Sole, Loick Pires, London 2012, Lord Coe, Olympics, Woking FC. Bookmark the permalink.