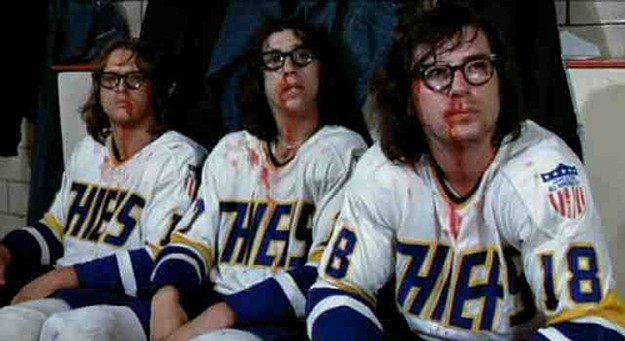 FORGET EL James. If you get pleasure from the pain of others, you need look no further than the 13-man football code.

For rugby league, judging by the 2012 Super League Grand Final, is a sport where you might end up with 50 shades of black (and orange) and blue (and yellow).

From Leeds skipper Kevin Sinfield going out cold but then casually returning to the action moments later, to unfortunate Warrington Wolves prop Paul Wood losing one of his crown jewels after it was ruptured by a Rhino (quite literally), this season’s finale was not for the faint-hearted.

Just in case you missed 30-year-old Wood’s post-match tweets (and I dare you not to suck in through your teeth as you read on):

“Ruptured my right testicle, got a knee 1 minute into the second half, had to have it removed.”

Was that the knee removed or his boy bits? The latter, I’m afraid. He then added:

“Just coming out the hospital to go home … seriously feel like I’ve left something.”

During the same game, Clare Balding tweeted, “Kevin Sinfield gets head-butted so hard he’s knocked flat. Gets up & plays on – incredible.”

Sinfield went on to amass 14 points in Leeds’ 26-18 victory, his ‘sterner stuff’ make-up encouraging further bar talk about rugby types being harder than the rest of us. But there’s plenty of evidence out there that it’s not just the oval ball exponents who suffer bravely for their sport.

Just ask Scott Dann after a similar spherical injury while playing for Blackburn Rovers last year, or the aptly-named Chris Whelpdale about his scrotal split last Boxing Day while turning out for Gillingham. Furthermore, he was back playing within four days. And going back to 1986, there was All Blacks number eight Wayne ‘Buck’ Shelford, who tore his sack (sorry, no easy way of writing that) in an international against France. Sacre bleu.

What counts against professional footballers of course is all that pathetic rolling around that has become commonplace in the top flight these days, blamed on those Continental types now prevalent. Then there’s all those balletic touches – a sleight of feet, perhaps – which make challenges look far worse than they really are, the ‘victim’ hood-winking us into believing he’s been kicked into the air.

And were you ever hurt so bad that the only way to relieve the pain was to roll repeatedly? No, me neither. Roll once and clutch your sore part maybe, but not over and over until you resemble a child rolling down a steep hill. 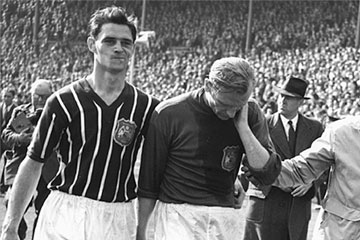 Sore Neck: But it far worse than Bert Trautmann feared in 1956

Football was different once, and I still wince when I see footage of Bert Trautmann rubbing his neck after saving bravely at the feet of Birmingham’s Peter Murphy in the 1956 FA Cup Final. He famously fought on, his side victorious but the ex-POW later learning he’d broken a vertebra in his neck.

A year later, Man United keeper Ray Wood broke a cheekbone in the next Cup Final, his pitchside-treatment proving good enough to have him back on as a forward in the late stages.

In the ’59 Final it was Elton John’s cousin Roy Dwight, scoring for Nottingham Forest before being carried off on 33 minutes with a broken leg, the remaining 10 men still seeing off Luton Town. A year later it was Dave Whelan’s turn for Blackburn, his leg break not enough to inspire Rovers to victory against Wolves or deter him from signing for Crewe Alexandra. Not sure what happened to him after that though.

In 1965, Liverpool’s Gerry Byrne broke his collarbone in the third minute but played on to an extra-time victory over Leeds, even setting up a goal for Roger Hunt. Yet that was the last straw for the FA, who finally decided to allow substituted. One sub that is, of course, none of this modern ‘perm any three from seven’ nonsense.

But it’s not really about which sport you follow, but perhaps a very British ability to bear extreme pain (I know, it’s nothing to compared to giving birth, he adds quickly to avoid complaints from his other half) and quietly wallow in the public reaction to your bravery.

It starts at an early age, and I can still hear the horrible thwack that echoed around my school field, bouncing back off the red-brick buildings, as two mates ran into each other while going for the same catch at rounders – an horrific confluence of chin, cheek and teeth. What made that worse was the fact that we all saw it happen a very long second before the victims did.

I could quite easily sketch in extra details about rugby tackles, studded boots bringing tears to the eyes, and cricket balls hurled at speed into their namesakes. But there are more unlikely sports too.

If you think hockey is a non-combat sport, try taking the full force of a hockey stick from teens who’ve spent the last few months watching re-runs of 1975′s Rollerball and 1977′s Slap Shot ice hockey movies. It was never wise to dwell on the ball if you heard the blood-curdling cry of ‘Hanson Brothers!’ behind you.

Yet none of that would have helped Paul Wood as he tried to put his double disappointment behind him.

In fact, I’ll just leave you with his words after the Grand Final: “It does smart a bit when you get hit down there, but this pain wouldn’t subside. I’ll have to look after myself now if I want any more kids – the lads have been relentless in texting me.”

But he wasn’t courting sympathy, and added: “I can take what’s happened. As a rugby player you just do your job until you hear the whistle, there was nothing heroic about it.”

A version of this Malcolm Wyatt article first appeared on the http://www.sportnw.co.uk website on October 8th, 2012.

A freelance writer and family man being swept along on a wave of advanced technology, but somehow clinging on to reality. It's only a matter of time ... A highly-motivated scribbler with a background in journalism, business and life itself. Away from the features, interviews and reviews you see here, I tackle novels, short stories, copywriting, ghost-writing, plus TV, radio and film scripts for adults and children. I'm also available for assignments and write/research for magazines, newspapers, press releases and webpages on a vast range of subjects. You can also follow me on Facebook via https://www.facebook.com/writewyattuk/ and on Twitter via @writewyattuk. Legally speaking, all content of this blog (unless otherwise stated) is the intellectual property of Malcolm Wyatt and may only be reproduced with permission.
View all posts by writewyattuk →
This entry was posted in Books Films, TV & Radio, Football, sport and tagged Bert Trautmann, Gerry Byrne, Hanson Brothers, Kevin Sinfield, Leeds Rhinos, Liverpool, Manchester City, Paul Wood, Slapshot, Wayne Shelford. Bookmark the permalink.