Never forgotten: The imposing Thiepval Memorial contains 72,000 names of British and Commonwealth troops killed during the Battle of the Somme who have no known grave, including Evelyn Lintott

IT’S difficult to know where to start when it comes to a suitable Remembrance weekend tribute to all those who died in military service protecting our freedom. But I’ve chosen a distinguished England international footballer and schoolteacher who grew up just three miles from my old Surrey base and represented my beloved Woking FC.

Evelyn Henry Lintott turned out for the Cardinals between 1900-08, the most successful player to ever represent the Surrey non-league club – capped at amateur and professional level for England, and also shone at Plymouth Argyle, Queens Park Rangers, Bradford City and Leeds City.

This acclaimed all-round sportsman and schoolmaster was born in the village of Busbridge, Godalming, on November 2nd, 1883, and brought up in nearby Farncombe, yet never even saw his 33rd birthday. He was killed in action on July 1st, 1916 in Northern France while serving with the West Yorkshire Regiment’s 15th Battalion – the Leeds Pals.

Lintott, educated at the Royal Grammar School, Guildford, lost his life at Serre on the opening day of the Battle of Albert, the first phase of a British and French offensive that became known as the Battle of the Somme – one of a staggering 19,000 fatalities that day, with another 57,000 men injured. Yet a few months before, while stationed in Egypt, he wrote home saying he was ashamed to put ‘On Active Service’ on the envelope as he ‘had so little to do’.

Woking was Lintott’s first major club, and he was still in his teens when he broke into the team, quickly making his mark as a centre-forward. In Cardinal Red – The History of Woking FC by Roger Sherlock and Robert Cumming (CNR Sports Promotions, 1995) we learn: “It was a bold – if fortunate – stroke when the committee, hard pressed for a centre-half, converted him to that position, as in that previous season he had scored some 60 goals of about 90. Centre-half in those days was the key position in the team, the place for the hardest worker, and it was because of his tremendous energy and untiring enthusiasm that he was given his chance there. It was probably his best position, though he was to gain his greatest fame as a left-half.”

Lintott made his debut in the 1899-1900 season, two months past his 16th birthday, in a 2-1 friendly victory over Brookwood, scoring the winner. His league and cup record in the East & West Surrey League, the West Surrey League and various cup competitions from there was impressive, scoring more than 50 goals in the next three seasons, claiming the captaincy, moving to centre-half and becoming an automatic choice for Surrey too, in whatever position it was felt he was needed.

He added 27 Woking goals  in 32 games during 1904-05 from centre-forward again, before his teacher training took him to St Luke’s College, Exeter, and in those next two seasons was only available during his holidays. Yet the Lintott link with Woking – where he also taught at Maybury School – continued, and over that era all four of his brothers featured for the Cards too, with the eldest, Stacey, captain in an FA Cup tie at Bolton Wanderers in 1908, later following Evelyn to Yorkshire and working as a Bradford Daily Telegraph reporter and editor of the Football Player Magazine.

While based in Devon, he also signed for Southern League club Plymouth Argyle in 1906, making two appearances in the 1906/07 season before moving to London, where he taught at Oldfield Road School, Willesden, and joined QPR in 1907, making his debut against New Brompton, the first of 31 Southern League appearances there before moving to the League with Bradford City in 1908.

Lintott made his England debut in 1907, when the FA first staged amateur internationals, the gifted left-half part of the side that beat France 15-0 on its first overseas tour. He went on to play against Ireland, Holland, Belgium and Germany too.

Despite retaining his amateur status, he soon won his first full cap – becoming Rangers’  first player to win international honours in a 3-1 win at Solitude, Belfast, against Ireland in the Home Championship on February 15th, 1908, aged 24. According to future Leeds City team-mate and football writer Ivan Sharpe, he ‘received the England selectors’ verdict on account of his bubbling enthusiasm, enterprise and brilliance.’

Further appearances followed in that year’s Home Championship against Wales (a 7-1 win at the Racecourse Ground, Wrexham) and Scotland ( a 1-1 draw at Hampden Park, Glasgow, in front of a new world record attendance of 121,452) and the following year against Ireland (a 4-0 win on his patch at Bradford Park Avenue) and Scotland again (a 2-0 win at the Crystal Palace), before friendly wins in Hungary (4-2 and 8-2, at Millenaris Sporttelep, Budapest) in late May 1909.

Lintott was certainly respected among his peers, and when Manchester United’s Billy Meredith and several colleagues formed new players’ union the Association Football Players Union (AFPU), soon adopted by the majority of Football League players, non-pro Lintott joined in an act of solidarity and was swiftly became chairman, among the union’s  campaigns a drive to abolish a £4 ceiling on wages. 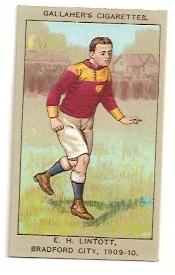 In 1909, with QPR in financial difficulty, Lintott signed pro forms to help out, and was sold to top-flight Bradford for over £1,000. He quickly settled in a terraced house close to Valley Parade, at the heart of the community that spawned and supported City, and the club found him employment at Sports and Pastimes, who made their shirts. Yet he expressed a wish to return to teaching and found a post at a school in Dudley Hill.

Lintott went on to help the Bantams avoid relegation in the 1908-09 season, while retaining his place in the England team and helping City finished seventh in 1909-10 and fifth in 1910-11. But after three more caps while at Bradford, a bad injury at Bolton saw him lose his confidence and form, and he missed an FA Cup Final win over Newcastle United.

After two goals in 53 games for City, he was persuaded by Herbert Chapman to join Leeds City in the Second Division in June 1912, his boss agreeing to pay a full year’s salary of £208 for the 10 months to the end of the season, more than the maximum wage. He went on to play 43 games for the Peacocks.

Of his debut, a 4-0 reverse at Fulham, a Leeds Mercury reporter wrote: “Lintott had always played magnificently. Strong in defence, he also found the opportunity to do nearly all the dangerous shooting that was accomplished on behalf of Leeds.” 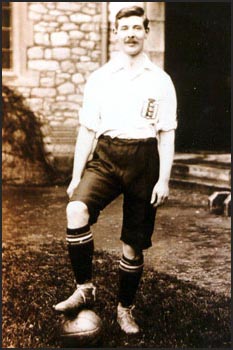 Lintott became club captain, soon proving he had lost none of his old ability, with further reports of his ‘clean tackling, smart headwork and clever placing…and untiring energy’. The Mercury added: “Lintott looks like proving an ideal captain, and in him Leeds City have certainly found a treasure. He is the sort of leader who by his play and general conduct on the field encourages and inspires his colleagues.”

He was ever present as City finished sixth in the table, impressing regularly at centre-half and prompting talk of an international recall in March 1913 when England selectors watched him against Bury.

In the 1913-14 campaign, he moved to right-half, yet struggled there. An ankle injury led to a lay-off until November, limiting him to just six appearances that season. He would probably have played on, despite being out of favour, but the onset of war changed all that.

Lintott joined up shortly after the outbreak of war, on 14th September, 1914, and frustrated at delays in recruiting in Bradford, enlisted at Leeds, giving his occupation as schoolteacher. His battalion left Leeds station on 25th September en route to training in the Yorkshire Dales, more than 20,000 giving a rousing send-off.

Lintott was promoted to sergeant and by December to lieutenant, becoming the first professional footballer to hold a commission. The following June his battalion moved to Ripon, meeting up with the 1st and 2nd Bradford Pals and 18th Durham Light Infantry.

Lintott’s death was officially reported by Private David Spink, who wrote, ‘Lt. Lintott killed by machine gun at 3pm in the advance. He was struck in the chest.’ More detail followed in a letter to the Yorkshire Post describing: ‘Lt. Lintott’s end was particularly gallant. Tragically, he was killed leading his platoon of the 15th West Yorkshire Regiment, the Leeds Pals, over the top. He led his men with great dash and when hit the first time declined to take the count. Instead, he drew his revolver and called for further effort. Again he was hit but struggled on but a third shot finally bowled him over.”

All-round Athlete: EH Lintott, respected wherever he played and taught

Lintott’s personal effects were sent home to his mother in Surrey, listed as three books, two bank pass books, one cheque book, one advance book, two note books, photograph case and photographs, photographs and postcards, with £78 distributed among his family.

His body was never found, but E.H Lintott is commemorated on the Thiepval Memorial to the Missing, among the 72,000 names of British and Commonwealth troops killed during the Battle of the Somme who have no known grave.

A freelance writer and family man being swept along on a wave of advanced technology, but somehow clinging on to reality. It's only a matter of time ... A highly-motivated scribbler with a background in journalism, business and life itself. Away from the features, interviews and reviews you see here, I tackle novels, short stories, copywriting, ghost-writing, plus TV, radio and film scripts for adults and children. I'm also available for assignments and write/research for magazines, newspapers, press releases and webpages on a vast range of subjects. You can also follow me on Facebook via https://www.facebook.com/writewyattuk/ and on Twitter via @writewyattuk. Legally speaking, all content of this blog (unless otherwise stated) is the intellectual property of Malcolm Wyatt and may only be reproduced with permission.
View all posts by writewyattuk →
This entry was posted in Books Films, TV & Radio, Football, sport and tagged Bradford City, Evelyn Lintott, godalming, guildford, Leeds City, Plymouth Argyle, Queens Park Rangers, Somme, West Yorkshire, Woking. Bookmark the permalink.