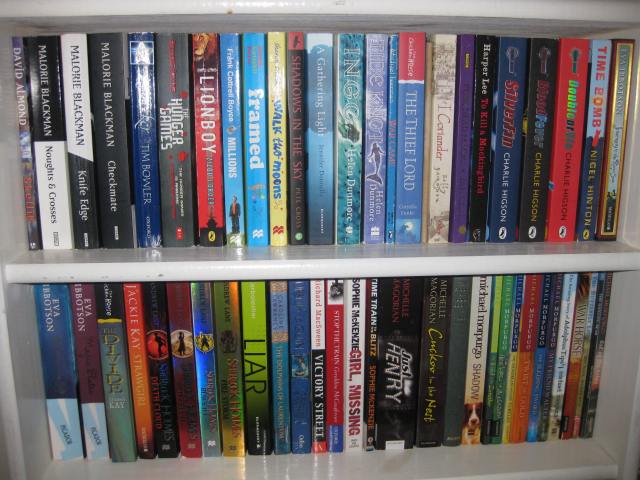 In which writewyattuk gets on the festive bandwagon and selects three great 2012 reads  for junior/middle school age children (nine to twelve-ish) – all possible last-minute Christmas buying conundrum solutions.

While we’re into the last days of the year, no way is this meant as a ‘best of’ selection. There’s only one of me, and only so many books I can get through between other commitments. But the three I’ve chosen here are among the best aimed at pre-high school children published in the past few months.

Those who know me will not be surprised I’ve chosen the latest titles from Frank Cottrell Boyce and Michael Morpurgo, for me among the very best writers we have (and forget the snobbery factor – children’s fiction is every bit as important as adult fiction in the right hands, and so much better for its lack of pretension). My third choice is perhaps more of a surprise, but maybe counter-proof that you really can choose a book by its cover!

Regular readers of this blog will know this scribe as a great advocate (champion, even) of using public libraries, and all three books are available via our nearby community establishments if money is an issue. And the more we all use our libraries, the less excuse those faceless national and local Government pen-pushers have to close them down. Political point made. Now, on with the reviews.

In the latest fast-paced story featuring an altogether magical car first introduced to the reading public in 1964 by James Bond creator Ian Fleming, there’s an emphasis on reverse as GEN 11 leads the Tooting clan into another whistle-stop series of adventures, its ‘chronojuster’ seemingly stuck and hurtling the family back into the Jurassic era.

This follow-up to Chitty Chitty Bang Bang Flies Again, FCB’s first modern spin on Fleming’s children’s classic, also splendidly illustrated by Joe Berger, finds the adventurous quintet out to master a further dimension to their perfectly-restored, altogether unique 1921 Paragon Panther, an ebony handle that works its time-travel mechanism – ‘fitted as standard’ and allowing the family to head back and forth through the centuries.

First, youngest son Harry gets his dream of spending time with dinosaurs, the Tootings transported head-on into drama as they’re chased by some very confused Tyrannosaurus rex. Again, brooding teen turned walking encyclopedia Lucy and her brother Jem – who instinctively knows where the car is coming from, if not always where it’s going – help the family navigate their alien landscapes.

I don’t think it’s giving anything away to mention the Tootings finally leave the Cretaceous period behind, yet – as Lucy has to point out – they’re still 66 million years from a return to  Basildon. And however far they travel, they can’t seem to ward off incoming calls on Lucy’s mobile from arch-nemesis Tiny Jack and his evil Nanny, who – not content with trying to steal Chitty and feed the children to piranhas last time – are now hanging out at their home base, making a few alterations that have the worried five-piece eager to return to throw them out. But not until they’ve enjoyed a few more adventures.

A plan is hatched to visit the inventive Commander Pott and his family, the heroes of the original Fleming tale. Before that though, the family have to tackle fresh crises in 1920s New York  and the US Mid-West, meet the car’s original owner and a new set of villains,  while a detour involving South American rain forest and the lost paradise of El Dorado leaves the Tootings up the Orinoco without a paddle, so to speak.

In the hands of FCB, it’s a winner, his prose and inventive style as humorous, sharp and beguiling as ever, and a perfect testing ground for all those boys seemingly uninterested in reading. And who knows, new converts to this treasured author and screenwriter may then go on to discover his holy trinity of children’s fiction – Millions, Framed and Cosmic.

A beautifully vivid tale of a little girl, Sara, spending the Christmas holidays with her Grandad while her Mum and Dad await the arrival of her new sibling, staying at the old man’s characterful clifftop stone cottage, complete with a huge fireplace, deep windows (‘perfect for sitting in’) and plenty of hidey-holes.

Sara loves her Grandad’s stories, not least those covering his days in the far north of Canada with his father, studying a traditional Inuit way of life. And as snow starts to settle around the cottage, Grandad breaks off from writing a book on Inuit folk tales to entertain his young charge.

Her favourite story is that of a lost polar bear cub he found one spring while out fishing,  coaxing him back to his friend’s home, to the dismay of the elders. Yet over time he grew too powerful to stay, the young boy and his Inuit friend teaching him to hunt before reintroducing him to the Arctic wilderness.

Soon, there’s enough snow to build Sara’s own  snowbear and small igloo, with Grandad helping, the old man’s sea glass used for the bear’s eyes and his special walrus-tusk snow knife to shape the bricks for their makeshift camp.

Yet for all the fun, Sara misses her parents and is desperate to share this winter wonderland with them. And late that night, when she can’t sleep, she wraps up and heads out to the igloo with her equally-restless Grandad, to enjoy hot drinks, prawn sarnies and more stories under the stars, snuggled in her sleeping bag, drifting off to sleep and waking up in a magical world where she finds her snow bear really does exist, embarking on an adventure to help track down the cub’s mother.

I should admit at this point I hadn’t expected this to be such a great story, expecting a cute animal yarn but nothing more. Yet Holly writes with great passion and story-telling craft, giving plenty for the reader to marvel at, be inspired by, and ultimately learn from.

A Medal For Leroy by Michael Morpurgo (Harper Collins, 2012)

Well, you didn’t think I could do a review of great ‘junior’ reads without mentioning the master story-teller, did you? And in a year book-ended by cinematic versions of War Horse and Private Peaceful, their author clearly remains as prolific as ever, his success with Little Manfred, another tale of discovery with a wartime background, followed by the wonderfully warm A Medal for Leroy. 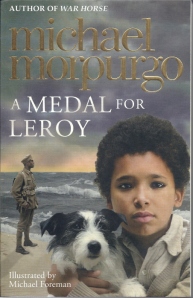 Where Little Manfred‘s back story involved German prisoners of war from World War Two, Morpurgo’s latest publication has a foot in the previous conflict and is dedicated to Lieutenant Walter Tull, the only black officer serving in the British Army during World War One.

A Medal for Leroy is not a fictionalised version of Tull’s amazing story, but there are elements within, and he was the inspiration, the author cleverly weaving in elements of his own post-war family background too, touching on both world wars but reflecting on so much more, not least racism and public attitudes towards mixed-race marriages over the years.

The story darts between key points in an extended  family’s hidden history, from a strict upbringing in Scotland before the Great War to behind-the-lines Belgium, then from Cornwall to London and the Kent coast between the wars, and onto a young boy in the post-war capital learning more than he bargains for about the secrets that have laid tucked just out of reach during those previous generations.

The focal point is Michael, a young lad growing up in London shortly after World War Two with his widowed French mother, and never having known his RAF pilot father, lost on active service. But when the boy’s Aunt ‘Snowdrop’ gives him a medal and a photograph, his secret family history is revealed and his life changes forever.

The subject matter could be confusing, but in the hands of Morpurgo we’re cleverly steered through, and our former Children’s Laureate and national treasure – as ever – makes it all so easy to follow, his highly-effective style using simple language to ensure the story as good as tells itself, navigating carefully through a minefield of flashbacks, reminiscences and switches between the eras.

As has so often been the case, Morpurgo’s thoughtful yet economical and measured prose is beautifully complemented by Michael Foreman’s fittingly in-tune art, something you tend to take for granted after such a winning partnership between the two Michaels over the years.

And while many more writers will struggle to get beyond a fourth or fifth book, Morpurgo – with more than 100 to his name, and counting – seamlessly produces best-seller after best-seller. Supreme, as his elder characters would say.

A freelance writer and family man being swept along on a wave of advanced technology, but somehow clinging on to reality. It's only a matter of time ... A highly-motivated scribbler with a background in journalism, business and life itself. Away from the features, interviews and reviews you see here, I tackle novels, short stories, copywriting, ghost-writing, plus TV, radio and film scripts for adults and children. I'm also available for assignments and write/research for magazines, newspapers, press releases and webpages on a vast range of subjects. You can also follow me on Facebook via https://www.facebook.com/writewyattuk/ and on Twitter via @writewyattuk. Legally speaking, all content of this blog (unless otherwise stated) is the intellectual property of Malcolm Wyatt and may only be reproduced with permission.
View all posts by writewyattuk →
This entry was posted in Books Films, TV & Radio and tagged A Medal for Leroy, books, children's fiction, Chitty Chitty Bang Bang, Frank Cottrell Boyce, Holly Webb, Ian Fleming, Libraries, Michael Morpurgo, The Snow Bear. Bookmark the permalink.