Hubba Bubba: Bradley Bubb gets our Haig Avenue awayday off to a fine start (Photo courtesy of David Holmes)

WHAT a week for the Cards, and a rare one for me as I’d seen them play three matches.

A half-term trip South allowed me to take in a battling Kingfield defeat to play-off hopefuls Newport County, before a return home and midweek trek to Barrow and shock 2-0 reverse, among barely 30 travelling fans. But by the weekend I’d finally seen my first away win since October, and on my doorstep in the Cardinals’ graveyard of Southport.

Haig Avenue – or the Merseyrail Community Stadium as the club like to call it these days – has been a miserable hunting ground for us over the years. I’ve tried to blank out most of those games, so I was genuinely surprised when I did some digging and realised just how badly we’d fared at the Conference ground closest to my Lancashire base.

We have to go back to October ’93 for the first visit, while I was doing 500-mile round-trips to see my better half between my native Surrey and the heart of Lancashire. Delving through some old programmes, I found my ‘fan’s eye view’ report of that match – during our second Conference season – against newly-promoted Port, titled ‘Buried in the Sand’, which probably tells you all you need to know.

I’ve slept since then, but according to this scribe’s report it proved a nightmare for our ‘leader’, revered keeper Laurence Batty, who appeared to throw the ball into his own net at a crucial stage in the game. We did pull one back through debut loanee Andy Gray, but ultimately lost 2-1. Incidentally, it cost £4 to get in, and no doubt I still felt robbed. But I got used to that over the years.

I recall very little about the following season’s 2-0 defeat save for it being a sunny if not wind-blown last day of the season. I had a house-load of visitors, and instead of being half-frozen to death – more often than not the case at Haig Avenue – we got sunburn. I also remember a visit to the beach after, with light aircraft lined up on the sands. Can that be right? Perhaps it was the ale. Anyway, eight days later Colin Fielder’s extra-time strike saw us past Kidderminster Harriers at Wembley, so I guess we got over it.

That next season we finished second to Macclesfield, with Southport one place behind. And at Haig Avenue we came back from 2-0 down for a point, thanks to Junior Hunter and Clive Walker. Geoff Chapple recalled how we  eventually overcame a strong wind and direct home tactics to keep it down, finishing in the ascendancy.

What I recall more readily is how we felt the wrath of some fastidious Port stewards, evangelical in their attempts to keep us corralled into their open-plan away end within their precious yellow lines, despite the fact that there were probably no more than 100 of us.

I’ve completely blotted out April ’97’s 4-1 defeat, although I see the wondrous Shane Wye scored our goal. The same could be said for our visits in February ’98 and March ’99, both ending in goalless draws. A report for the first game mentioned Nat Abbey’s masterclass in goal, covering Batty’s absence, as John McGovern’s side somehow dealt with rain, snow, sleet and freezing cold wind. In that next stalemate, dashing Darran Hay received a red card. Again I’ve clearly blanked that.

The weather must have been better for our August ’99 visit. We were unbeaten at the time, but it was the first day of the season. We hadn’t won in six previous attempts there, but Brian McDermott was feeling bullish and gave debuts to four new signings. We lost 4-1 though, the future Reading boss telling reporters ‘defensively we were shocking’ and ‘Southport out-fought us in the midfield areas’. Sub Steve West scored our goal, but Batty was lobbed by Andy Gouck in the opening attack and in another horrid encounter of pumped high balls and strong wind it went from bad to worse for the new-look Cards.

If that wasn’t enough, we had to go back in late February for an FA Trophy fifth round tie – 13 years ago this week. As Clive Youlton put it in Cards On The Table (Tempus, 2003), “Another dreaded trip to Southport and Haig Avenue loomed. A comprehensive 3-0 defeat, with his team bereft of ideas, spelled the end. Even defender Richard Goddard had been tried up front to show just how desperate McDermott’s thinking had become.”  He got the bullet at that Monday’s board meeting, and now it was no wins in eight attempts at Haig Avenue. But finally salvation was on its way.

On September 23rd, 2000, we finally won for the first time there – under the late, great, white-trainered Cards legend that was Colin Lippiatt. Darryl Flahavan kept a clean sheet and Jinky Steele grabbed what proved to be the winner on 42 minutes. I should remember more, but with an eight-month-old daughter at the time it was all a bit of a blur.

Normal service soon resumed with a 2-0 defeat in mid-February ’02, followed by an horrific 5-1 defeat in October that year, 43-year-old coach Glenn Cockerill with a battling midfield display and Ben Abbey putting us ahead before a second-half capitulation, Warren Patmore sent off for a dodgy challenge and legendary boss Geoff Chapple, who was back in charge, subsequently potted.

Paul Beard wrote in the WFC programme of the performance being ‘our most awful for well over a decade’, eclipsing even an 8-1 home defeat to Dagenham and Redbridge. The doomed boss recalled in Clive Youlton’s biography Geoff Chapple – The Story Behind The Legend (Tempus, 2006): “I was sitting opposite Glenn (Cockerill) on the way to that game and we were ringing up people like Paul Gascoigne, just to see if they could turn out for us because we were so short of players. Glenn had to play himself, which was an embarrassment. We were winning 1-0 for an hour and we lost 5-1 after Glenn, who was playing well, brought himself off. I was absolutely shell-shocked.”

But for Shwan Jalal’s goalkeeping it could easily have been double figures, and at 9am that Monday at Kingfield, Chapple got the heave-ho, with Cockerill taking over. Yet somehow we survived the drop that turbulent season, a record nine end-of-term draws followed by a win over Telford seeing the Sandgrounders relegated instead.

That at least ensured there were no Port defeats for two seasons, but on their return from the Conference North, we lost 1-0 at Haig Avenue on a miserable Monday night in April 2006, where I was among a handful of hardy Cards, and the next season’s visit – a last day of the season 0-0 – proved to be the hosts’ last in the top flight for a while. And as it turned out, we followed them into regional football within two seasons.

If I’d remembered all that last Saturday, I might not have got out of bed, thinking Lippiatt’s win was destined to be our only ever success in PR8. But like most Cards fans (and all proper footie fans) I have this compulsion to regularly inflict pain upon myself, so a freezing cold day in late February in the North West held no fear.

After our performance at Holker Street against Barrow, maybe I shouldn’t have bothered. But I could hardly turn down my guests’ free lift to see my beloved Cardinals at a ground less than 17 miles away.

We’d had a similar season to the Sandgrounders, with Port boss Liam Watson proving as canny a manager as Garry Hill in some respects, helping put this former Football League club back on the map and punching above their financial weight, despite part-time status.

Having missed out on a pre-match pint, we headed straight for the away terrace, and I was well prepared this time, the extra layers ensuring I didn’t feel the cold in the first half. And as it turned out, Bradley Bubb, who ruled himself out of the midweek slog to Barrow (perhaps he had bluebird flu), was on form, grabbing the headlines with both Woking goals, while Mark Ricketts was at his best in the middle of the park. It probably helped that Port were reduced to 10 men when Simon Grand was shown a straight red midway through the first half for a bad challenge on Ricketts, and Brad finally made them pay before the break. 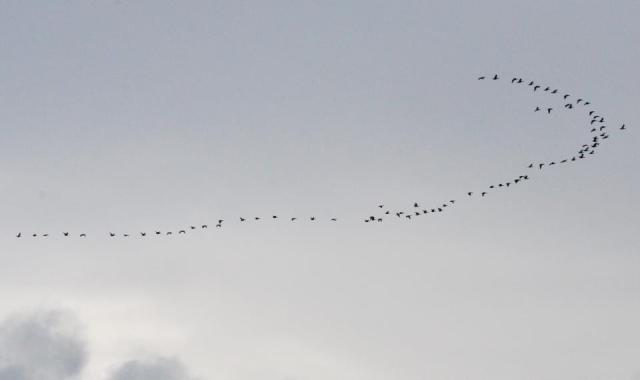 Flying High: The local birdlife make their point to the away fans (Photo courtesy of David Holmes)

There was concern before that perhaps we should have taken note of the spectacular wildfowl formations in the skies above us, the local birdlife seemingly advocating being anywhere but here. That seemed all the more likely when the second half started amid biting arctic wind, snowflakes, and a slight wobble as Port levelled from a cracking Aaron Chalmers free-kick just past the hour.

But things eventually warmed up on account of all the hot air directed the ref’s way by the home fans and players following a contentious decision minutes later. You could say the game turned, the official seemingly unmoved as Shaun Whalley was bundled over by loan keeper Seb Brown, the home support woken from their slumbers to shout abuse as one, and the players joining in. Meanwhile, Woking broke up the other end, and Bubb found the net via a hapless home defender, running behind the goal to celebrate.

We had several chances to put the game out of reach after that, but it wouldn’t be Woking without some late jitters, and it at least made that moment when the ref finally blew for time all the better. For once, that trip back to Surrey must have been bearable, and our renewed confidence showed in the following midweek home win over Forest Green. 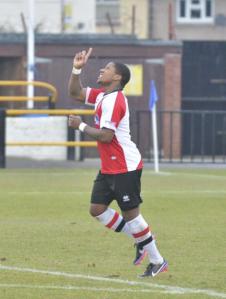 This time I missed out, but Radio Surrey’s Tim Durrans and summariser John Moore perfectly described a mighty 90 minutes for the Cards which left us in nosebleed territory – above Luton in ninth place.

For the visiting fans who’d suffered against Newport and Barrow, Southport provided a perfect antidote. There was an element of keeping your head down and your smirk zipped in as we made our way past the home throng outside the stadium after. But let’s face it, after 20 years of hurt at Haig Avenue, we truly deserved that moment of gloating.

A freelance writer and family man being swept along on a wave of advanced technology, but somehow clinging on to reality. It's only a matter of time ... A highly-motivated scribbler with a background in journalism, business and life itself. Away from the features, interviews and reviews you see here, I tackle novels, short stories, copywriting, ghost-writing, plus TV, radio and film scripts for adults and children. I'm also available for assignments and write/research for magazines, newspapers, press releases and webpages on a vast range of subjects. You can also follow me on Facebook via https://www.facebook.com/writewyattuk/ and on Twitter via @writewyattuk. Legally speaking, all content of this blog (unless otherwise stated) is the intellectual property of Malcolm Wyatt and may only be reproduced with permission.
View all posts by writewyattuk →
This entry was posted in Football, sport and tagged Barrow, Brian McDermott, Colin Lippiatt, Football Conference, Garry Hill, Geoff Chapple, Glenn Cockerill, John McGovern, Liam Watson, Newport County, Southport, Woking. Bookmark the permalink.

1 Response to A lubbly Bubbly awayday at Haig Avenue