Lining Up: The Woking players get ready for a battling draw at Macclesfield Town (Photo courtesy of David Holmes)

ANYONE who’s listened to outwardly gruff, sometimes grouchy, occasionally gregarious Garry Hill’s post-match interviews this season will know he’s had a bit of a thing for that ‘magical 50-point mark’.

With all due respect to the Woking FC boss, it’s one of those cliched yardsticks in football that comes up time and again, despite its complete absence from any established works of spell-bound literary fantasy by Pullman, Rowling or Tolkien.

You never heard about that magical quest for football’s Holy Grail of avoiding relegation from Frodo Baggins (not to be confused with Cards legend Mark Biggins), Lyra Belacqua (nothing to do with Hull City’s ex-Woking keeper Adriano Basso) or that speccy lad Potter (that’s Harry, not pre- and post-war Cardinal Doug).

Those successive wins I mentioned on this blog at Southport and at home to Forest Green saw Hill’s points target just one win away by the time of Lincoln City’s March 1st visit. But a draw then, followed by a home defeat to Mansfield, left us grounded on 48.

It looked like we had at least a point at Cambridge United on the 9th, but in the week the Cardinals maybe had their minds on other things in Rome, the Abbey Stadium away end proved something of a dissolved monastery at full time, Seb Brown’s error leading to a late, late home winner, while their keeper Pope (I kid you not) and his team-mates celebrated.

We needed a boost after that, and it came in the shape of a battling display in a goalless draw at Macclesfield Town the following Tuesday, taking us up to 49 points. And what a performance that was, every bit as important as the more headline-grabbing home wins Woking have carved out this season.

In the end, it took a final great save from Brown to absolve that previous match’s error and ensure a point, keeping out ex-Card Keiran Murtagh, who along with his gaffer Steve King – described by that night’s radio summariser John Moore as looking more like he was off to a   gymkhana with the Cheshire set – seemed to suggest they had something to prove against these part-time Surrey upstarts.

It wasn’t the on-loan Dons stopper’s first important save of the night, but he seemed to have gained confidence as the game worse on, buoyed by a committed defensive display from central pairing Joe McNerney and man of the match Brett Johnson, who proved assured beyond belief.

Then there was John Nutter, a thorn in the Silkmen’s armoury at both ends, while captain Mark Ricketts was his usual cool and commanding self in the middle of the park, despite a couple of choice Macc challenges (even if Lee Sawyer’s own part was curtailed by a caution which saw his half-time departure and a further ban in the offing).

While we rarely looked like having the ability to unlock Macc’s own defence in that first half, an inspired interval switch saw Kevin Betsy come into his own and Bradley Bubb and Jayden Stockley cause all manner of problems up front … apart from scoring of course, but you can’t have it all (apparently).

After the final whistle at the Moss Rose, I was on hand as the home stewards gathered for their stand-down, Steve Thompson took the Cards players for a warm-down on the pitch, and our Garry gave his post-match interviews and on-air summary. He then headed down the main stand steps and was informed of that night’s results, seemingly giving his blessing to each (yep, that religious theme again), announcing how he wanted 60 points now. Eh? 60? Blimey, he’d unofficially changed the goalposts again. But why not.

Come Saturday, our big chance of reaching that new plateau arrived in the form of a home clash with as-good-as-doomed AFC Telford United, rock bottom after just 31 points from 38 league matches, a succession of behind-the-scenes traumas mirrored on the pitch for the beleaguered Bucks.

Not as if that made us any more confident. We have a habit of beating the better teams yet coming unstuck against the others. The stats were simple enough – 10 draws, 14 defeats and no victories since October 9th’s 4-1 victory at Dartford, that just three days after a 1-0 home win over the Cards in which keeper Aaron Howe was dismissed in the third minute.

But, on what Bucks caretaker boss John Psaras told BBC Radio Shropshire was a ‘potato field’ (didn’t stop both teams playing nice football on it, mind), the visitors were three goals down by the break, left with a ‘mountain to climb’ (another misguided topographical reference, methinks), with returning midfield playmaker Billy Knott – on loan from Sunderland but regularly sidelined by injury – wasting no time in melting our hearts again.

I couldn’t be at Kingfield, but Jon Howick’s BBC Surrey commentary was just the job, the club highlights later adding to the picture. The Cards forged ahead through two Bubb strikes and a belter from Stockley, unlucky Telford giving it a go but beaten by superior finishing. But it wouldn’t be my Woking without a few missed heartbeats, and after Bucks keeper Ryan Young twice kept out Stockley, former Northern Ireland striker Steve Jones (who I remember in his younger days at Chorley) pulled one back early in the second half.

Still we might have finished them off, Bubb not far off again and a Betsy delivery beating the keeper and last defender only for Jack Parkinson to somehow scoop over. And you might have thought in the week when the Cardinals finally made their deliberations and chose Francis that we had been offered absolution of past sins at that point.

However, I’m talking about sub Adam Francis, son of Gerry (one of my boyhood heroes, along with England and QPR team-mate Stan Bowles), and I think all that red and white smoke issuing from the Kingfield version of the Sistine Chapel (well, it is my church, after all) seemed to get in our eyes, Platters-style, as Aaron Williams struck a second for Telford with nine minutes left, and it looked like we were about to be ex-communicated, forever destined to retain negative goal difference after that December thrashing at Hyde.

However, Young then went from Bucks hero to villain in rather bewildering circumstances, his post-challenge shirt-grabbing of Parkinson leading to something of a free-for-all and the ref calling play back, booking the keeper and awarding a penalty. While there was confusion at the incident, Bubb positively blasted the ball to Young’s left for his hat-trick.

There was still time for a sloppy Bucks pass to play in Betsy, who rounded the keeper with aplomb -whatever that is – and slotted home a last-minute fifth, on a day when Hill admitted it might have been 10-6. One thing’s for sure, that Michelangelo would have struggled to have come up with a snappy mural on the Victoria Arch underpass to depict this seven-goal thriller.

Whether ‘Bubby’ (as our gaffer later called the on-loan Aldershot striker) or ‘Knotty’ (I made that one up of course) will be with us come the end of term remains to be seen, but the fact is that – as Hill later underlined – in a national division of 16 full-time clubs and 13 ex-Football League outfits, we’ve punched well above our weight this time, making our 52 points and counting every bit as pleasing as last year’s Blue Square South title.

Our Garry had something else to add before heading home, telling Jon Howick on the radio ’65 points has to be the target’. Eh? 65 points? Had I misheard him? Clearly not. For there he was on camera soon after, telling us: “If we can get 65 points I’ll probably look at that as being a better achievement than winning the Conference South last year.”

So there we go, in the week when the Cardinals deliberated then finally delivered, while the Holy Grail had been found, there was still plenty to play for. Enough poor religious and supernatural metaphors and puns? Maybe. But our Garry tells us the mission from here on in and those last nine league games is to gain at least 65 points. If we can do that perhaps we could even arrange a blessing at St Peter’s. In Old Woking that is, of course, rather than Vatican City. And that’ll be magic enough until next season.

* To those who for some reason unfathomable to this blogger are puzzled as to the origins of my club’s nickname, the Cardinals, it is believed – he adds, vaguely – to go back to a visit to the area by Cardinal Thomas Wolsey nearly 500 years ago, when Clive Walker was just a twinkle in his father’s eye. 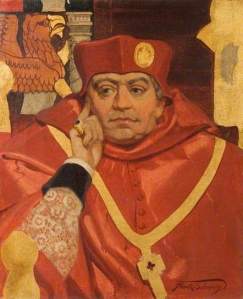 Palace Fan: Cardinal Wolsey, depicted by Frank O. Salisbury in his 1910 painting, asking the KRE regulars to sing up

It is understood that  ‘Wolster’ (his on-pitch nickname) was staying with his old mucker King Henry VIII (whom I believe preferred a Saturday afternoon wedding to a keen-fought derby) at Woking Palace (surprisingly not a football team in their own right) in 1515 (quarter past kick-off) when he heard he had been made a cardinal by Pope Leo X.

Actually, my sources reveal that Tommy was more of a Saturday afternoon shopper than a footie fan, hence one of Woking’s two main shopping centres being named after him since. But the idea stuck, and we were soon wearing Cardinal Red.

Incidentally, while we’re at it, the afore-mentioned Pope had nothing to do with that 1970s’ big-haired clown-loving singer Sayer nor the 16th-century version of the appalling Simon Cowell-driven TV ‘talent’ contest. So now you know. Personally, I’d have preferred it if we’d gone with the other nickname that caught on in our early days, the Cremators. More of that next time … probably.

A freelance writer and family man being swept along on a wave of advanced technology, but somehow clinging on to reality. It's only a matter of time ... A highly-motivated scribbler with a background in journalism, business and life itself. Away from the features, interviews and reviews you see here, I tackle novels, short stories, copywriting, ghost-writing, plus TV, radio and film scripts for adults and children. I'm also available for assignments and write/research for magazines, newspapers, press releases and webpages on a vast range of subjects. You can also follow me on Facebook via https://www.facebook.com/writewyattuk/ and on Twitter via @writewyattuk. Legally speaking, all content of this blog (unless otherwise stated) is the intellectual property of Malcolm Wyatt and may only be reproduced with permission.
View all posts by writewyattuk →
This entry was posted in Football, sport and tagged Billy Knott, Brett Johnson, Cambridge United, Cardinals, Garry Hill, Joe McNerney, John Nutter, Macclesfield Town, Steve King, Telford United, Woking. Bookmark the permalink.