Posted on September 8, 2013 by writewyattuk

THERE’S something about seated gigs that unnerves me, and I instinctively felt uneasy pulling up a pew at Deacon Blue’s official tour opener at Preston Guild Hall.

Granted, this was a more senior audience than when Ricky Ross and co first pitched up in Lancs in the late ’80s, with babysitting issues a-plenty out there. Even so …

I wonder if the band felt the same at first. There must have been a few nerves jangling when they strolled out, knowing – after all the warm-ups – this was for real.

They certainly hit the ground running though, nonchalantly moving into gear with slow-building, Crowded House-like Laura from Memory from superb 2012 comeback The Hipsters.

Then there was the less-feted but truly worthy Bound To Love, which never saw the light of day until the 1994 Our Town compilation.

Despite warmth from band to audience and largely vice versa, there were concerns from those just here for the old hits as another fine cut from The Hipsters kicked in.

But the pace was lifting, and The Rest’s Blue Oyster Cult-type riff took the band to a higher plane. 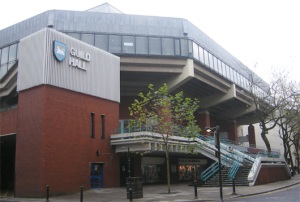 I mentioned pulling up a pew earlier for good reason, this being something of a religious experience, under-lined by Ricky’s rousing oratory mid-song.

The showman was coming through, his talk of turning this municipal building into a tabernacle, a temple, a cathedral striking many a chord.

Pretty soon, a large part of the floor was on its feet, the song’s climax zipping neatly into old favourite Queen of the New Year.

It never struck me until then how much of a country song that was, but I guess Ricky’s love of Americana was always there. And the lack of space in front of us ensured an uneasy but no less enjoyable rocking foray into line dancing.

The audience now in the palms of their hands, they changed down for the wondrous Chocolate Girl, with smiles all around. And 1991’s Your Swaying Arms kept that vibe alive.

The audience stayed on their feet as we moved on to The Outsiders, another example of Ross’ continuing songcraft, almost Go-Betweens-ish on the album version.

We saw Ricky as social commentator next, the message behind 1992’s powerful Your Town clearly no less relevant 20 years on, fitting perfectly as it led into the following year’s Peace and Jobs and Freedom.

And with the audience hungry for a hit, Real Gone Kid went down an absolute storm.

If I had any problem with the Deacon Blue of old, it was perhaps that ‘80s production, with too much of-its-time keyboard, and Lorraine a tad too high in the mix in places.

But if anyone had any doubt over her part in this success story, it was easily dismissed by the shared vocal on Stars off The Hipsters, a Daniel Lanois/U2 feel leading to a gutsy bout of vocal duelling between husband and wife.

And Ms McIntosh was on scintillating form when she took over lead vocal duties for Fellow Hoodlums’ Cover From The Sky.

Mr & Mrs: Ross and McIntosh get down to it at Preston Guild Hall (Photo courtesy of the band’s official Facebook page)

My better half sensed a Steve Earle feel, and I could hear positive parallels with Maria McKee, Iris DeMent and Emmylou Harris to name but three more.

That followed a sparkling Love and Regret, taking me back to countless late-night bedroom listens to the evocative Raintown in 1987 and beyond.

Yet Ricky never stopped writing great songs, a case in point given on their latest somehow not-quite top 10 hit The Hipsters.

They were really firing now, founder-member James Prime off to the side but his piano work central, and more recent additions Gregor Philp (lead guitar) and Lewis Gordon (bass) clearly having fun too.

Loaded was a true high point, not least as the main-man married it – musically and lyrically – with Woody Guthrie’s I Ain’t Got No Home, written 50 years earlier but no less relevant.

Then we had the unofficial Scottish national anthem Fergus Sings the Blues, Ricky’s range again proof that this white man can sing the blues.

All those years on, he’s energy personified out there, playing the audience like James Brown in his pomp and with more than a hint of his old hero Bruce Springsteen.

Those Christian Brethren roots shine through too, although Ricky discards that old time religion for a love of sweet soul music.

The band were away on That’s What We Can Do from the last album, something of a snapshot of where these hipster survivors are in 2013, original drummer Dougie Vipond again on top form, even when he slipped from his stool.

There was more to come of course, a nostalgic crowd joyously singing along to Bacharach & David cover I’ll Never Fall In Love Again.

It’s the mark of a success of a song when it just takes a chord (a note even) for an audience to guess what’s next, and Ricky stood back as Preston sang every word of that first verse and chorus of Dignity, an anthem for hope and belief if ever there was one.

That might have been a great point to bow out, but Ricky toyed with his adoring audience as he led us a further dance, Bruce Channel’s Hey Baby just the first part of a dance with a rock’n’roll medley gearing up to 1991’s Talking Heads-type show-stopper Twist and Shout.

It didn’t end there either, with something of a leftfield surprise to end the show, although if you’re heading off to another Deacon Blue date further down the line, look away now ….

Have they gone now? Right. Well, as someone who has Abbey Road up there among his all-time top 10 LPs, the band’s respectful cover of The Beatles’ Golden Slumbers / Carry That Weight / The End was a triumph, if not a gamble for the wider audience.

I’m not fully sure that this Guild Hall crowd fully appreciated it, but it was a near-perfect way to finish. And on this form, I quite envy those of you out there taking in the remaining dates of this tour.

* With special thanks to Andy Kettle and CMP Entertainment

* For Malcolm Wyatt’s interview with Ricky Ross ahead of the Preston Guild Hall show, head here

A freelance writer and family man being swept along on a wave of advanced technology, but somehow clinging on to reality. It's only a matter of time ... A highly-motivated scribbler with a background in journalism, business and life itself. Away from the features, interviews and reviews you see here, I tackle novels, short stories, copywriting, ghost-writing, plus TV, radio and film scripts for adults and children. I'm also available for assignments and write/research for magazines, newspapers, press releases and webpages on a vast range of subjects. You can also follow me on Facebook via https://www.facebook.com/writewyattuk/ and on Twitter via @writewyattuk. Legally speaking, all content of this blog (unless otherwise stated) is the intellectual property of Malcolm Wyatt and may only be reproduced with permission.
View all posts by writewyattuk →
This entry was posted in Music and tagged Deacon Blue, Dignity, Dougie Vipond, Fergus Sings The Blues, Lorraine McIntosh, Preston, Raintown, ricky ross, Scotland, The Beatles, The Hipsters, Woody Guthrie. Bookmark the permalink.

12 Responses to Still hip after all these years: Deacon Blue – Preston Guild Hall