After the storm and under the floodlights with Woking: from the Shay to the International, via the Humber and the Hoe

As renowned meteorologist Robert Plant once put it, “If it keeps on raining, the levee’s going to break”. And a couple of months ago that might well have been the case in my old neck of the woods in the Deep South.

As it turned out, Woking FC only missed out on a few games during the major flooding and storm season that rocked the South-East and South-West at the turn of the year, preventing late-2013 and early-2014 clashes at Salisbury, Dartford and a county cup tie at Chipstead plus just one match at Kingfield, unfortunately the latter when I’d made my 450-mile round-trip from Lancashire.

Last time I put finger to keyboard about the Cards in early November, I mulled over my first six matches this season, after a few close encounters with Garry H, Thommo and co, mostly during away-days in my adopted North-West. Now I’ll pick up from there, in what proved a defining sink-or-swim period amid the rising water levels.

My general thrust back then was not to panic, the gaffer previously proven capable of key decisions at critical times. Changes were surely just around the corner. And that proved to be the case. We’re still just about in the bottom end of the table, but far closer to the play-off places than the drop zone.

Besides, as I’ve stressed before, you have to experience the lows before you can fully appreciate the good times, something I’ll be trying to get over to a few Man United fans on my patch these coming months.

Those hoped for changes were indeed not far off, the first sign perhaps the loan signing of Fulham youngster Charles Banya on November 2nd. But that was just part of the build-up, for within a week a certain Jack Marriott had arrived – also initially for a month – courtesy of Ipswich Town.

I shouldn’t have to go into detail about the lift that gave everyone, but a few days later Josh Payne got his England C call-up, and there was a real spirit of optimism around Kingfield. It showed on the pitch in a 3-0 home defeat of Dartford, Ipswich boss Mick McCarthy looking on as Jack the Lad made a sparkling debut, gelling with Luton loanee Scott Rendell, the Cards goal drought soon forgotten as both strikers and Joe ‘Beast’ McNerney netted.

You could argue that the fixtures were kind to us, coming back from behind for a 3-2 home win over hapless battlers Hyde (including a Marriott double) next, maybe getting a better indication of where we were at in the 2-0 defeat at league leaders Cambridge. But then we won 3-0 at Hereford after an explosive first-half, Rendell scoring twice and Marriott again playing his part.

That set us up nicely for my first sighting of the Tractor Boy Wonder. I’d read Chris Dyke’s Surrey Ad reports and listened to Jon Howick and John Moore’s feverish Radio Surrey’s internet commentaries, now I was all set to see him for myself, taking my place at The Shay alongside similarly-impressed new club director Garry Richardson, better known for his on-air Radio 5 Live shifts, on what proved to be a nervy but ultimately victorious seven-goal thriller which showed both sides’ best sides, but a few shortcomings too.

In typical Cardinal style we were soon behind, within 90 seconds, but then came the fightback, Jack’s effect on his team-mates obvious in a performance in which Banya and Rendell also impressed, with great support from Payne, Kevin Betsy and returnee Keiran Murtagh. We were 3-1 up by the break, Betsy later setting up 19-year-old Marriott for his hat-trick.

This being Woking, we almost contrived to lose that lead, the Shaymen raising their game immeasurably – backed by vocal support from the stands, not least the old boy behind us who – incensed at one Cards player’s rant at a linesman – shouted in true Yorkshire style, ‘Shut thy gob!’ But despite that home comeback, Marriott might even have scored his fourth before his late exit was greeted with wild applause.

I too could now count myself as a believer. It wasn’t just his touch and consummate finishing, but also his ability to track back and get involved all over, the kind of player who inspires those around him, not least Rendell. That could only be good news, and another win followed, Scott R emerging from the fog to settle a Kingfield clash with Kiddie, 1-0, leading to an impressive away turnout in Humberside for the FA Trophy that weekend.

It was a pig of a draw, one of those trips into the unknown that unnerve, visiting confident Conference North high-fliers North Ferriby. But I’d been to Church Road a few times in my old guise as a Northern Premier League match reporter, and was looking forward to it.

While it was a pleasant enough winter’s day in this picturesque spot between the village allotments and the estuary, close to the mighty span of the Humber Bridge, the football was less eye-catching. We were only a short distance from Marriott’s Beverley birthplace, but it was a day to forget for our loan hero and his team-mates, going down 4-0 to a side that went on to reach the quarter-finals after a 4-0 home drubbing of Lincoln City. The Villagers too looked dodgy at times, but showed a desire we were missing that afternoon. Perhaps I should have gone Christmas shopping after all.

If there’s something we’ve learned this term though, it’s that now and again Woking will get a kick up the KRE (for want of a better expression) when they under-perform, and a week later second-half strikes from Marriott and Betsy secured a 2-0 win at Nuneaton.

As it turned out, we lost 3-1 at home to Salisbury City on Boxing Day in Banya, Marriott and Rendell’s last games, with yours truly just one of those hit by the January 4 call-off against Hereford United during a New Year trip to flooded Surrey. At a time when wake-boarders were using flooded multi-storey car parks in Guildford and near-neighbours Godalming Town FC went six weeks between home games, you might have expected a few more casualties, visiting officials ready to call off matches before you could say Hoe Valley flood alleviation scheme.

But a week later a gutsy display secured a 1-0 home win over Braintree Town, with the Beast on target and Giuseppe Sole impressive in his first full 90 in 18 months. It didn’t take a genius to see our shortcomings though, with genuine concerns that we couldn’t recruit the likes of Marriott and Rendell again.

We were out-fought at Welling United (3-0) that next week, and a midweek 1-0 home reverse to Chester made it abundantly clear that we needed something special to avoid slipping into that drop zone. There was a brighter outcome in a 2-2 draw at Lincoln City, and it might even have been a win but for a saved last-minute Giuseppe Sole penalty, with  ‘plenty of resilience in difficult conditions’ according to Alan Barnes’ report. But we were still missing that killer touch.

That was about to change of course, and Garry H’s dalliance in the end of January transfer window led to a deal whereby Mick McCarthy allowed our Suffolk Blue back for the rest of the season, Scott Rendell (My Lord) quickly following on contractual terms, and Mansfield Town’s Murtagh too. 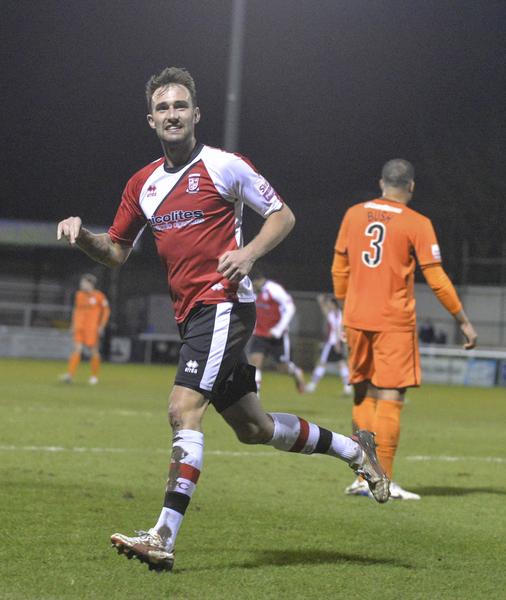 I was on hand for the trio’s triumphant return – all three impressing – having somehow engineered a visit for a Monday game. It wasn’t just about those players either, nor the continuing form of Payne. Many more deserved plaudits that memorable night.

There was a strange run in February, a see-saw sequence of midweek defeats and weekend wins. I was there for one of the better showings, our 2-0 win at Gateshead, with two unlikely but deserving scorers – the under-valued John Nutter and ever-improving John Goddard, our backs-to-the-Byker Wall display setting up a winning early Spring weekend on Tyneside for this reporter. You don’t tend to expect atmosphere at the International Stadium, but the home fans were in good voice, with plenty to savour on the pitch too, every Woking player proving their worth, as Mr Hill acknowledged in the post-match interviews before a mass team exodus for the train back home.

We won a 3-2 home thriller with Macclesfield Town that following weekend, although I struggled to keep up with the twists and turns as I was back on Tameside, witnessing another Conference Premier battle. I was reporting on Aldershot’s 2-2 draw at Hyde, where the visitors’ line was led by ex-Cards Bradley Bubb and Brett Williams. And I learned that afternoon that we weren’t alone in committing costly errors at both ends. Let’s just say the sense of frustration from the Shots fans at missing out on three points made me feel better about my own team’s occasional misfortunes.

How far we can rise up the table from here remains to be seen, but we’ve got enough about us to at least see ourselves to half-way again, as shown in promising early-March back-to-back victories at The Hive against play-off hopefuls Barnet (3-1) and at home to struggling Southport (2-0). That included a fifth goal in five games for Rendell, with Spring definitely in the air, and much to  savour as Messrs Howick and Moore positively purred on my interweb connection.

As a result, it was almost nosebleed territory for the Cards, up to 14th place and 48 points with 10 games remaining, with Garry Hill feeling ‘lovely’ and whispers about play-off form too. Last time around, I concluded that we’d seen glimpses and now needed to see a lot more. A lot of water’s flown along the Hoe Stream since, yet we’re still holding our heads above water. And I’ve every confidence we’ll do swimmingly from here.

* This article is a revised, updated version of one penned by Malcolm Wyatt for the Woking FC official programme, published on March 8th.

* With special thanks to David Holmes, as ever, for use of his match-day photographs.

A freelance writer and family man being swept along on a wave of advanced technology, but somehow clinging on to reality. It's only a matter of time ... A highly-motivated scribbler with a background in journalism, business and life itself. Away from the features, interviews and reviews you see here, I tackle novels, short stories, copywriting, ghost-writing, plus TV, radio and film scripts for adults and children. I'm also available for assignments and write/research for magazines, newspapers, press releases and webpages on a vast range of subjects. You can also follow me on Facebook via https://www.facebook.com/writewyattuk/ and on Twitter via @writewyattuk. Legally speaking, all content of this blog (unless otherwise stated) is the intellectual property of Malcolm Wyatt and may only be reproduced with permission.
View all posts by writewyattuk →
This entry was posted in Football, sport and tagged aldershot Town, Garry Hill, Gateshead, Halifax Town, Hyde, Ipswich Town, Jack Marriott, Josh Payne, Kieran Murtagh, North Ferriby United, Scott Rendell, Woking. Bookmark the permalink.

1 Response to After the storm and under the floodlights with Woking: from the Shay to the International, via the Humber and the Hoe