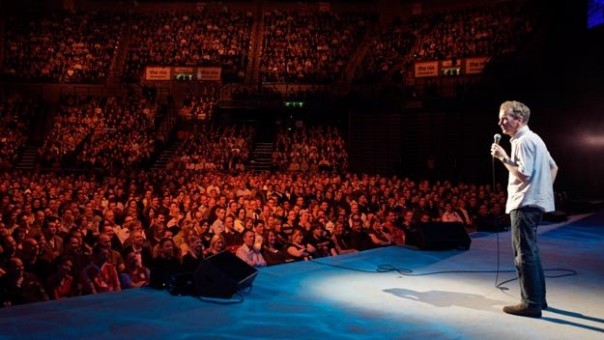 Going Live: Frank in stand-up action, albeit at a different venue (Photo: http://www.channel4.com/)

I’d like to say Frank Skinner’s cleaned up his act now he’s a proud dad, moving away from his more risque material in a show of middle-aged respectability.

For much of this gig that seemed to be the case – at least by his old standards. But to paraphrase fellow turn-of-the ’90s breakthrough comics Reeves and Mortimer, he just wouldn’t let it lie.

He’ll tell you he does it in a bid to not let down his loyal fans, and – despite his brief no-swearing policy experiment a few years ago – towards the end of his Man in a Suit set, Frank was back on familiar territory, with a few X-rated disclosures designed to make you squirm.

Not easy to summarise, but for those who are likely to catch him on this tour, I’ll just add a few pointers – like a novel use for Status Quo style dancing; the use of ’50s British film dialogue in the intimate act; and on similar ground, alternative employment of the ‘help yourself’ hand gestures you’re more likely to encounter while sharing packets of crisps down the pub with friends.

But while you might not yet be ready to share a night out watching Frank with your parents or your children, it’s fair to say this West Midlands comedian is something of a national treasure these days.

And any comic who comes on stage, grabs a microphone, launches into Latin carol Gaudete, then invites the audience to sing the next line, is alright by me.

Unsurprisingly, the vocal response was a little muted on that occasion, but Frank had his first laughs in the bag. And we were away.

The 57-year-old was in charge from then on, as you might expect, rambling between subjects, some more likely than others.

Early on, he remarked how it was quite unusual to see a grey-haired celebrity still at large, in this era of various unsavoury allegations and arrests – our first example of that crossing-the-line humour for which Frank is feted.

Talking about his partner, he then apologised for using the term ‘my girlfriend’, saying it was a little like saying ‘my skateboard’ for a man of his advanced years.

He also added how they’d stopped holding hands in public, lest he should be perceived as receiving help.

The laughs continued, not least as Frank related how he equates marital rows with watching established bands play live – explaining how ‘new material’ was followed by a few ‘greatest hits’ i.e. those inflammatory moments in a relationship that still rankle.

His observation humour included how people use archaic speech at unexpected times, letting on how during an audience with HRH Prince Charles he ‘beseeched’ the next-in-line not to reply to comments on his YouTube page (yes, apparently His Royal Chuckness has one).

That led to talk of ‘chip and pin’ machines, and how we’re asked to tap in details then ‘return to merchant’, before an anecdote about an incident in Preston earlier that day.

Apparently, someone shouted ‘legend’ from a van, the comic feeling self-consciously proud of the accolade until he noticed King Arthur stood behind him. Only some of that may actually have been true.

Frank also invited us to join in his latest passion, asking that when we see someone out walking in a long black leather coat to proclaim a Carry On style ‘Ooh, Matrix!’ in respect of both Keanu Reeves and Kenneth Williams.

The subjects came thick and fast, with plenty of input from the audience, including a re-enactment with embarrassed Duncan on the front row of the day a woman stood directly in Frank’s personal space on a crowded Tube train.

We even had a treasured routine from long ago – one viewers to Frank’s appearance on Room 101 in the Nick Hancock era might recall – his rendition of Harry Belafonte’s Yellow Bird (‘up high in banana tree’).

There was social comment too, including advice for the homeless and an unsavoury anecdote about a drunken dancer in a soiled suit hassling buskers, and recognition of how the poor’s waif-like days seem to be over, judging by the average size of Jeremy Kyle guests.

Then came the tale of the police car that screeched to a halt, a frantic copper asking if Frank and his partner had seen a guy brandishing a samurai sword in the area, before speeding off again – leaving the petrified comic pondering, ‘where does that leave us?’

There was an on-going theme about haiku on the night, Frank giving comic examples of this Japanese poetic form, and reflections on what Lord Ga Ga must think about his wife’s canon of work.

The sound wasn’t great at times, and with tickets priced in the higher £20s, that was disappointing.

But overall this was a winning evening in the company of a comedy great, who – eight years after his last UK tour – clearly still has that stand-up magic, while seeming to have lost none of his ability to make an audience cringe.

* If you’re going to see Frank, it’s worth getting in a little earlier and checking out support act Gareth Richards, and not just for his eye-catching omnichord.

Frank may not have embraced a routine involving parenthood yet, but Gareth offers a nice twist on that topic.

Gareth, who has co-hosted Frank’s Absolute Radio show, supported Rhod Gilbert, and guested on Russell Howard’s Good News, proffered an engaging act with a couple of songs thrown in – one a lament of unrequited love for shy teenagers, the other detailing unwanted gifts from your child. Well worth looking out for.

For the recent writewyattuk interview with Frank Skinner, head here.

And to find out more about Gareth Richards, head here.

A freelance writer and family man being swept along on a wave of advanced technology, but somehow clinging on to reality. It's only a matter of time ... A highly-motivated scribbler with a background in journalism, business and life itself. Away from the features, interviews and reviews you see here, I tackle novels, short stories, copywriting, ghost-writing, plus TV, radio and film scripts for adults and children. I'm also available for assignments and write/research for magazines, newspapers, press releases and webpages on a vast range of subjects. You can also follow me on Facebook via https://www.facebook.com/writewyattuk/ and on Twitter via @writewyattuk. Legally speaking, all content of this blog (unless otherwise stated) is the intellectual property of Malcolm Wyatt and may only be reproduced with permission.
View all posts by writewyattuk →
This entry was posted in Books Films, TV & Radio, Comedy & Theatre and tagged Frank Skinner, Gareth Richards, Gaudete, Harry Belafonte, Keanu Reeves, Kenneth Williams, Man in a Suit, omnichord, Preston, Preston Guild Hall, Prince Charles. Bookmark the permalink.