Can science and maths really be deemed cool or funny? And when do geeks and nerds become cult TV and touring successes?

Gateshead-born small screen science experiment guy Steve Mould might just know the answers to those and many more questions.

And the regular Blue Peter and The One Show contributor is currently enjoying a renaissance in interest in all things mathematical and scientific, alongside award-winning geek songstress Helen Arney and stand-up mathematician Matt Parker.

The trio are still putting on a few dates to mark the last knockings of their Full Frontal Nerdity tour, the revered comedy trio with a difference discussing and demonstrating the appliance of science and maths.

I caught up with Steve at home in London, to ask about his love of all thinks academically nerdy. 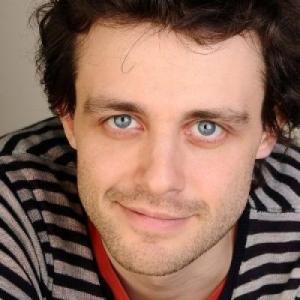 He’s made something of a name for himself in recent years through his contributions on the box, also including Britain’s Brainiest, I Never Knew That About Britain, Newsnight, The Alan Titchmarsh Show and Sky News, as well as on Absolute Radio.

You could argue that his academic passion has emerged as something of a cultural force following the success of Californian sitcom The Big Bang Theory and those clever clogs TV shows featuring the likes of Dara O Briain and Dr Brian Cox.

There’s certainly evidence of that in his trio’s Festival of the Spoken Nerd live show, described as ‘where sparkling wit meets fascinating science in a comedy night for the insatiably sci-curious’.

Helen, Matt and Steve’s act was devised as a ‘celebration of science’, with comedy, songs, live experiments and unashamed geekiness.

Sometimes they’re joined by guest scientists and comedy headliners, and there’s always time for questions at the end (with extra marks for showing your workings). 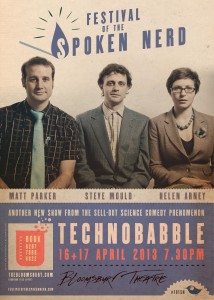 But does it really work? Apparently so, with successful Spoken Nerd shows across the UK, including sell-outs at London’s Bloomsbury Theatre, Shakespeare’s Globe, Hammersmith Apollo, the Theatre Royal Haymarket and Udderbelly on the South Bank.

Then there are the winning Green Man and Latitude music festivals and Edinburgh Fringe appearances, with rave reviews along the way.

They’re on my doorstep this coming week too, playing Preston’s 53 Degrees (Thursday, June 26) as part of the Lancashire Science Festival.

So how did Steve get involved in all this?

“I studied science at university, and there were open mic gigs at the time. I carried on doing stand-up when I graduated and got a job, but missed the science.

“I soon found there was this whole community of science communicators – people making a job out of talking about science. So I gave that a go.

“It took off quite well, not least because of my experience in stand-up, and I was doing comedy and science.

“It was a similar thing with the others. Matt was also doing talks as well as stand-up, and Helen was doing musical comedy on the circuit but quite nerdy stuff too.

“We all realised we were doing similar stuff, lamenting the fact there weren’t really the opportunities out there, so decided to run this monthly event in London.”

The result, Festival of the Spoken Nerd, is described by Steve as ‘us forcing ourselves to do new material, coming up with a new theme every month’.

“We’d been doing Edinburgh for years, separately, and it was there that we had that conversation about starting to work together.”

The trio have returned to Edinburgh in their combined role twice, while Steve has carved out a parallel TV career too.

“Blue Peter was first. They’d seen some videos I made, and were looking for a science presenter to do a little segment as a one-off.

“It went really well and they kept getting me back, asking for fresh ideas.”

So what do those who turn up for the live shows tend to get from the three of you?

“A really funny show, with lots of interesting stuff.

“When you put something together for a tour, it becomes this slick, well-rehearsed show. We’re also doing a run on London’s South Bank at the moment.

“I reckon we’ve just a handful more appearance before we have to write a new show. We’re not doing Edinburgh this time, but start new material nights next month.

“We’ve been doing this since 2011 and have grown from that. Basically, the show’s about the three of us are trying to outdo each other, with our experiments and maths.

“For me, it’s really interesting stuff. I like to talk about stuff I find interesting, and that’s true of Matt and Helen too. Then there’s the banter between us.”

I take it you’re all quite competitive?

It shouldn’t really work, should it?

“We had that feeling when we started, playing an upstairs room in a pub, but were packing the place to the rafters.

“We were thinking, ‘who are these people, and why are they coming?’ But there is this renaissance of people getting interested in science.

“Maybe they remember how much they enjoyed certain science and maths subjects when they were kids.

You’ve been involved in a movement dubbed guerrilla science too. What’s that all about?

“That involves a group of people I used to work with, and who I still collaborate with. They’re the super-cool science communicators, integrating science into culture.

“They go to music festivals and art galleries – all these cool places where you wouldn’t normally get science. They’re the hipsters of science!”

So are Steve and people like Dr Brian Cox the new poster boys of the science world?

“Well, I’d like to think so! I wouldn’t say so myself, but if other people say it …”

And how does Dara O Briain fit into that?

“On the spectrum of comedy to science, I’d say Dara’s more on the comedy side. I was on a panel stage show with him, and he’s an amazingly friendly guy.

“I only spent around an hour with him, but then met him two years later, and he remembered me. He’s great.”

All a bit different from the TV scientists of yesteryear, the mad professor types like the late Dr Magnus Pyke and Sir Patrick Moore.

“It was people like Johnny Ball when I grew up, very much geared towards kids and fun. I’m not so sure there was much fun science for adults.”

What influenced you on the telly as a young lad with a growing passion for science?

Golden Ball: Johnny Ball was an inspiration to Steve Mould

“Definitely Johnny Ball. Then there was How 2, back in the day, and I used to love Tomorrow’s World.”

Do you visit schools these days, as well as put on these more adult-oriented shows?

But the kids would love the swearing, surely.

And how long have you been able to feel proud to be a nerd?

Was Steve, whose schooling in Blaydon in the North-East was followed by a physics degree and MA at Oxford, always outgoing, or the quiet one at the back of the class?

“I was quite out-going, although I never did any drama. I was talkative and always very inquisitive, wanting to know how things work.”

Did you have inspirational teachers?

What do you advise the kids you see in school today about fulfilling their own dreams?

“It’s how you look at things. I try to get the idea across that – especially in maths – it’s not good enough to know how to do something. You want to know why it works.

“If you understand an underlying pattern, then you’ve really got it.”

Which are easiest – adult or children’s audiences?

“Kids are harder, because the whole process of getting an idea across is about putting yourself in someone else’s shoes – from where they are to where you are.

“It’s much easier to do that with an adult, because their brain is much closer to where mine is now. With a kid you have to ask what they currently know. It’s a longer journey.”

And do the experiments ever go wrong on stage?

“Yes, but the thing is, sometimes they’re not going to work.

“One I do in this show is electrocuting a pickle. I’m not sure what I got wrong, maybe my pickles were too wet, but I kept blowing the fuse. It flashed briefly, but I couldn’t reset it.”

Is that where you need the charm of Tommy Cooper to keep the audience on your side?

“Do you know what – it’s fine when it goes wrong. An audience likes to see it go wrong. It’s very real then. If it’s too slick, people don’t believe it.”

For all the latest on Festival of the Spoken Nerd and ticket details for Preston’s 53 Degrees (June 26), Suffolk’s Latitude Festival (July 17) and Grantham’s Gravity Fields Festival (September 26), head here.

And for more details of Lancashire Science Festival (June 26 to 28), try here.

This is a revised edition of a Malcolm Wyatt feature with Steve Mould first published in the Lancashire Evening Post on Thursday, June 19.

A freelance writer and family man being swept along on a wave of advanced technology, but somehow clinging on to reality. It's only a matter of time ... A highly-motivated scribbler with a background in journalism, business and life itself. Away from the features, interviews and reviews you see here, I tackle novels, short stories, copywriting, ghost-writing, plus TV, radio and film scripts for adults and children. I'm also available for assignments and write/research for magazines, newspapers, press releases and webpages on a vast range of subjects. You can also follow me on Facebook via https://www.facebook.com/writewyattuk/ and on Twitter via @writewyattuk. Legally speaking, all content of this blog (unless otherwise stated) is the intellectual property of Malcolm Wyatt and may only be reproduced with permission.
View all posts by writewyattuk →
This entry was posted in Books Films, TV & Radio, Comedy & Theatre and tagged 53 Degrees, Brian Cox, Dara O Briain, Festival of the Spoken Nerd, Gravity Fields, Helen Arney, Johnny Ball, Latitude Festival, Matt Parker, Preston, Steve Mould. Bookmark the permalink.