Posted on October 7, 2014 by writewyattuk 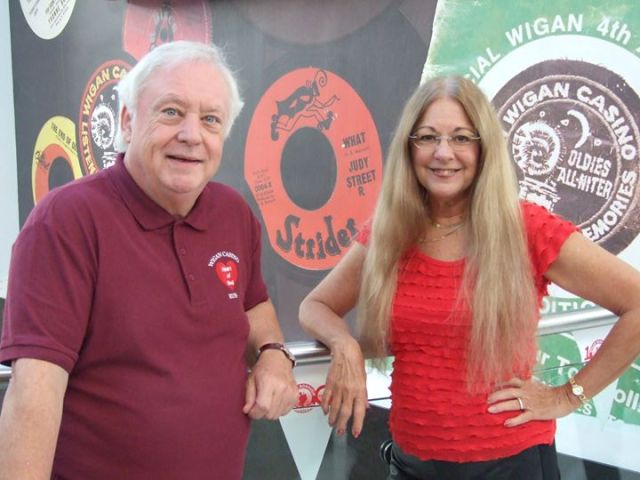 In case you didn’t realise, there’s something of a Northern Soul revival going on at the moment, no doubt stoked by the likes of Duffy and John Newman on the mainstream scene.

And the forthcoming, much-anticipated film that takes this music and dance movement for its title suggests it’s far more than just a fad.

There were enough young faces busting moves at Preston’s 53 Degrees on Friday night to suggest there’s plenty of truth in the old ‘keep the faith’ maxim and underline the notion that classic soul’s here to stay.

Those who first filled the floor to Judy Street’s rediscovered What in the early ’70s have grown a little longer in the tooth since. But that 1967 flip-side has proved to have something of a life of its own.

Judy herself has been astounded by an on-going love for the song and the perennial teen who sang it, and this was part of her way to say thank you for all the support she’s discovered this side of the Atlantic in recent years.

After getting Russ Winstanley’s call to return to the UK – a few months later than originally planned – this Northern Soul icon finally got to experience Preston’s soulful credentials first-hand.

Fresh from a well-received visit to Skegness’s Northern Soul Survivors Weekender, Tennessee-based Judy Street headed for the North-West, and clearly relished her big moment in front of an adoring in-crowd.

If there were nerves ahead of this solo performance, Judy used them to positive effect, an infectious smile suggesting she was having the time of her life out there. 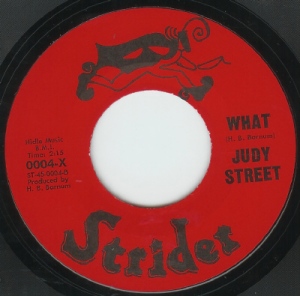 It’s been a long time coming, with What – later covered by Soft Cell – recorded 46 years ago.

Yet the star attraction of Preston’s Got Soul’s penultimate show at this seemingly-doomed uni venue peeled back the decades and gave it her all.

It was a brave choice of set, with Judy – turned back by customs officials in May, lacking the necessary work permit – airing tracks from her new Cover Girl CD, including a number of revered dancefloor favourites.

I say brave because I’m aware of the past snobbery that seems to have gone hand-in-glove with an otherwise friendly scene. So many belting tunes are off-limits for the aficionados.

Yet Judy has crafted a collection of respectful nods to some of those classics, and to good effect.

I would have much preferred a full band behind her, but she did commendably, with the two scooters on the stage helping set the tone.

Her backing tracks were constructed with great care, and though it wasn’t seamless – and couldn’t be in the circumstances – Judy’s charm and great vocal saw her through.

She was a teenager when she recorded for HB Barnum in LA, and clearly the voice has changed over the years.

But if you can imagine a vocal talent like Cher tackling classic ’60s soul rather than her late ’80s mainstream soft rock, you’ll not be too far off.

There’s a Dusty Springfield feel on some tracks too, and this is clearly a performer with a deep appreciation of a scene she only truly learned about in later years.

From Tainted Love and Hit and Run to Do I Love You (Indeed I Do), Sunny and Wigan’s adopted anthem Long After Tonight Is All Over, she proved her worth.

And among the hip hits and standards there was even a song penned by Judy’s hubby, What Are You Waiting For serving as a fine tribute to that whole scene. 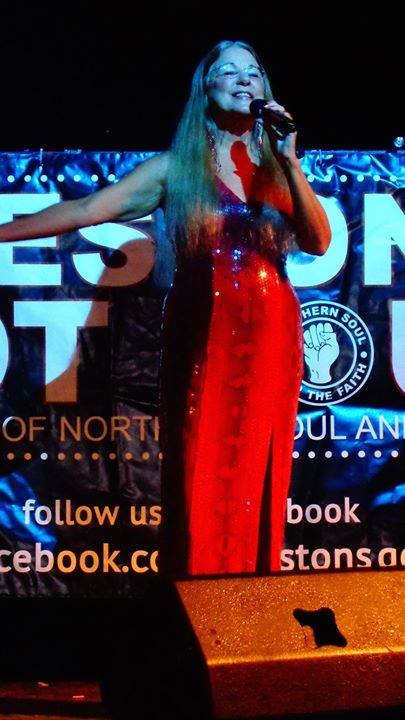 Judy was clearly at home with the mic. and talked briefly about her sightseeing trips to Liverpool and Wigan – the latter getting the biggest cheer, I might add.

And while the Casino’s long gone, there was plenty of life and passion in the assembled faithful, also inspired by spot-on contributions on the decks by DJs Dave Evison and Glenn Walker-Foster.

GWF for one bopped and shimmied enthusiastically behind his turntables, and proved to be the perfect MC for Judy, ensuring the floor remained busy before and after her two sets.

And as you might expect, Judy finished both sets with the song that started it all – the much-loved What proving nothing less that a crowd favourite.

I gather more tickets sold in May, and there was plenty of room to manoeuvre out there. PGS’s organisers could certainly do with a few more punters for star guest Eddie Holman at December 5’s 53 Degrees finale.

But those who showed up were rewarded, and Judy – who later signed CDs and merchandise with the great charm you might expect from this positively-personable performer – justifiably returned home on a high. 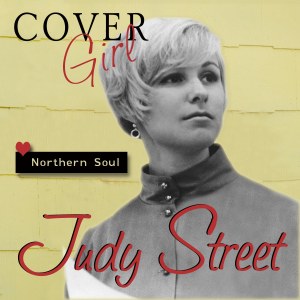 Cover Girl is dedicated to ’40 years of Northern Soul’, and certainly provides a worthy tribute to a scene that continues to thrive all these years on.

There’s an element of ‘catch-up’ in parts, and now and again you wonder just what we might have missed out on from this artist during her lost years … or at least the years lost to us.

But I guess that’s part of the magic of Northern Soul. It’s not about success stories as much as great music. And nostalgia plays a big part in all that.

We’ll never get back the teenage girl who delivered What in ’68, but we at least get to hear what a talent she was … and remains.

Produced by Judy’s other half Tom Stewart and engineered by Mike O’Neil, Cover Girl was recorded at Serenity Hill Studios in Nashville, Tennessee, and carries a flavour of all those classic recordings that turned us on to ’60s soul on this side of the pond.

It features a number of standards and carefully-chosen covers, and where else could we start but Ed Cobb’s unmistakable Tainted Love, 50 years on from Gloria Jones’ original.

There’s something of an acknowledgement as well to Marc Almond, whose version with Soft Cell revived the song in the UK in a similar way he later did with What after its earlier Northern Soul revival. 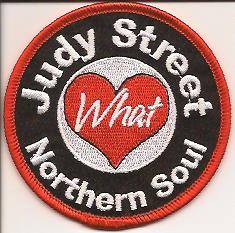 It’ll Never Be Over For Me is the song that first brings Cher to mind, and seems just right for Judy, although it will always remain associated with Timi Yuro.

Apples, Peaches, Pumpkin Pie is more classic Northern territory, and there was a time when Judy might have scored a hit here with this alternative spin on Jay & the Techniques’ floor-filler.

Again, you’re left wondering how this artist missed out on the big time. If her HB Barnum-penned hit had been a hit … well, who knows.

But it’s not about what might have been as What Are You Waiting For, Tom’s own revival song, and something of a tribute to Judy’s cult hit. Lovingly honed in the spirit of the ’60s, and a track you have to check the date on to see if it was really penned five decades ago.

There’s no mistaking the next cut, and for many Frank Wilson’s Do I Love You (Indeed I Do) is a song that sums up all that’s so good about this scene.

Judy’s version is fairly faithful. And while you might think on the surface you can’t go wrong with this classic, I beg to differ. You could quite easily, but she avoids the pitfalls. 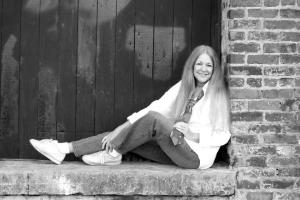 It’s a personal thing, but for me the mix is a bit too low on Spiral Starecase’s More Today Than Yesterday. I need to hear Judy competing with that brass, and a more live feel. But like the next track, Laura Greene’s Moonlight, Music & You, it’s another great showcase for Judy’s voice, the latter’s violin intro tugging the heart-strings.

Bobby Hebb’s Sunny has been covered many times before, and I’ll always have a soft spot for the original and Georgie Fame’s cover. But again Judy delivers, and this time provides a heartfelt tribute to her days learning at the foot of her father’s piano.

And Jimmy Radcliffe’s Long After Tonight Is All Over offers a grand and rather poignant finale, delivered with the nostalgic feel you might expect from a song that conveys so many emotions for Northern Soul lovers.

It’s unlikely that Cover Girl will be your introduction to all these songs, and it’s not designed to be.

It’s not about replacing the originals, and thankfully they remain with us because of the archiving we now have in place and the efforts of those who kept the faith and ensured this great music would never die.

But what we have here is a sincere, respectful tribute to just a handful of the songs that make this scene work, and a reminder of just what we’ve missed out on from Judy for all these years.

Yet we’ve got her now, and long may she deliver.

Alternatively, copies can be obtained via Preston’s Got Soul’s Andrew Kirkham, who can be contacted on 0788 5077638.

For a link to my original Judy Street feature and interview, from May 2014, head here.

A freelance writer and family man being swept along on a wave of advanced technology, but somehow clinging on to reality. It's only a matter of time ... A highly-motivated scribbler with a background in journalism, business and life itself. Away from the features, interviews and reviews you see here, I tackle novels, short stories, copywriting, ghost-writing, plus TV, radio and film scripts for adults and children. I'm also available for assignments and write/research for magazines, newspapers, press releases and webpages on a vast range of subjects. You can also follow me on Facebook via https://www.facebook.com/writewyattuk/ and on Twitter via @writewyattuk. Legally speaking, all content of this blog (unless otherwise stated) is the intellectual property of Malcolm Wyatt and may only be reproduced with permission.
View all posts by writewyattuk →
This entry was posted in Music and tagged 53 Degrees, Cher, Dustry Springfield, Eddie Holman, Glenn Walker-Foster, HB Barnum, Judy Street, Northern Soul, Preston's Got Soul, Russ Winstanley, Wigan. Bookmark the permalink.