From Satisfy my Soul through to a show-stopping How Long, those at the Guild Hall on Wednesday night were left in no doubt as to why they call Paul Carrack ‘the man with the golden voice’.

Whether tackling classic ‘60s ballads or more recent twists on the theme, Paul proves soulful to the core, making each song his own.

There’s no snobbery when I tell you my better half and I brought down the average age, and it took a while to get the joint jumping.

But irrespective of the demographic, Paul’s music is timeless and his vocal delivery ensures intimacy, something support Elliott Morris also managed.

This Lincolnshire lad with Wiltshire, Scots and Welsh roots told us he was a pub gig regular until discovered by Paul, and proved a master of percussive guitar.

With a little John Martyn influence delivered in Seth Lakeman style, Elliott redefined folk in the same way PC does with his soul roots. 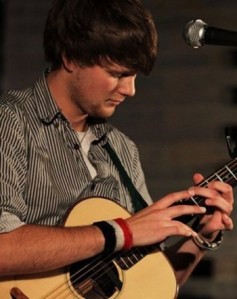 Tap Dance: Elliott Morris knows his way around the guitar

And who could resist his finale – a tale of Michael Jackson’s Thriller’s link to Cleethorpes (true -look it up) leading to an expressive, alternative run through Billie Jean.

Paul saw Elliott’s worth when he invited him on tour, and you can expect to hear more from this young artist.

After a brief break, you’ll have been forgiven for not realising Paul’s band were on for a while, such was their nonchalant arrival. But they soon found their groove.

Those who haven’t seen PC live lately may be surprised to know he features tandem drumming, his son Jack sat alongside Dean Dukes, a combination which proves effective.

Steve Beighton’s sax and Andy Staves’ guitar add further dimensions, something of a continuation of Paul’s great voice, while Jeremy Meek’s bass provides a solid platform, and Paul Copley’s backing vocals and keyboards help his namesake alternate between key and fret work (and sometimes both at once).

All in all, we’re talking a tight unit, as you might expect around this stalwart performer, and the band were certainly well into their stride for Jackie De Shannon’s When You Walk in the Room, paving the way for the journey of well-balanced nostalgia and sweet soul music that followed.

A laid-back Good Feelin’ About It suggested Elvis Costello meets Booker T & The MGs, and gave rise to Bobby Bland’s Ain’t No Love in the Heart of the City, a taste of LA given a North Country feel.

One in a Million, the first of the tracks from latest LP, Rise or Shine, married The Impressions’ People Get Ready with Squeeze’s Black Coffee in Bed. And that’s no bad thing.

The heartfelt That’s All That Matters to Me – a dad’s love letter to his daughter – led to Another Cup of Coffee, the first of three fine Mike + The Mechanics cuts on the night.

A pensive Eyes of Blue was touchingly delivered, while Time Waits For No One further showcased Paul’s new album.

And that was followed by his sublime 1981 Squeeze collaboration Tempted, the second song of the night co-written with Chris Difford, following Satisfy my Soul.

Brenda Lee’s Losing You added a warm midwinter glow to proceedings, with You Don’t Know Me another timeless ballad in good hands, reminiscent of Ray Charles.

I Don’t Wanna Lose Your Love is a more laid-back take on How Long, and gave rise to a funkier Make Your Mind Up, with inspirational hints of Sly and the Family Stone and The Staples Singers.

The high point for me was Paul’s revelatory re-jig of Bruce Springsteen 1992 cut If I Should Fall Behind. And he was on top form now.

Heading to a gig on the second anniversary of your Dad’s passing was always going to be tricky, and the odds were always against me in that last verse. Not a dry eye in the house.

There was still time for the Needles and Pins-like feelgood track When My Little Girl’s Smiling before the crowd finally found its feet for Paul’s finest pop hit, Over my Shoulder.

And hats off to anyone who can whistle so competently live, although Paul’s homburg remained resolutely on all night.

Recent single Stepping Stone followed, Paul’s seven-piece returning for the Motown-esque Time to Move On then a fitting final singalong on his 40-year-old signature tune, which was of course Ace.

Perhaps I’d prefer to watch PC and his band tearing it up down their local, with a pint in my hand and the dance-floor buzzing.

But there was no doubting the band’s commitment on the night, nor Paul’s peerless delivery.

A special feature/interview with Paul Carrack appeared on this site on October 31, with a link here.

For full tour details, and all the latest from the Carrack camp, head to his official website here.

And for more about Elliott Morris and his forthcoming appearances, try here.

A freelance writer and family man being swept along on a wave of advanced technology, but somehow clinging on to reality. It's only a matter of time ... A highly-motivated scribbler with a background in journalism, business and life itself. Away from the features, interviews and reviews you see here, I tackle novels, short stories, copywriting, ghost-writing, plus TV, radio and film scripts for adults and children. I'm also available for assignments and write/research for magazines, newspapers, press releases and webpages on a vast range of subjects. You can also follow me on Facebook via https://www.facebook.com/writewyattuk/ and on Twitter via @writewyattuk. Legally speaking, all content of this blog (unless otherwise stated) is the intellectual property of Malcolm Wyatt and may only be reproduced with permission.
View all posts by writewyattuk →
This entry was posted in Music and tagged Ace, Bruce Springsteen, Elliott Morris, Michael Jackson, Mike + The Mechanics, Over My Shoulder, Paul Carrack, Rise or Shine, Squeeze, Tempted, The Living Years. Bookmark the permalink.