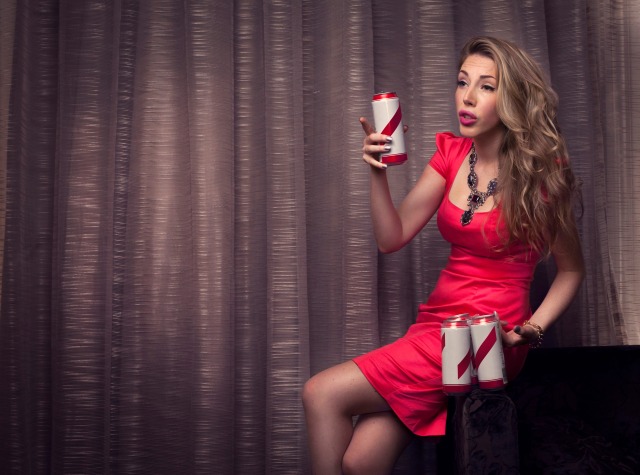 Canada Dry: Katherine Ryan always gets her can

And it’s proved to be a resounding success, one that started with sell-out runs at London’s Soho Theatre and the Edinburgh Festival.

Due to popular demand, the Canadian comic ended up adding 10 dates, the culmination of a big couple of years too which have seen her become a TV staple thanks to appearances on BBC 1’s Have I Got News For You, Live At The Apollo and Let’s Dance for Comic Relief, BBC 2’s Mock The Week, QI and Never Mind The Buzzcocks, and as a regular panellist on Channel 4’s 8 Out of 10 Cats.

Along the way the 31-year-old has brushed aside controversy and more, while carving out a big reputation as an ‘often dangerously-fierce pop culture-obsessed lady’.

While she proved tricky to pin down, so to speak, Katherine did manage to answer a few of my questions – albeit via email. And here’s how our discussion panned out.

So, did this Ontarian ever think she could have hacked life as a city planner, as per her original studies? Or maybe that’s still the plan if people just stop laughing one day.

“If I’d become a city planner after uni, I guess I’d find happiness there and I wouldn’t know that I’d missed out on the life I have now.

“We could all be leading a million different lives based on one tiny choice. It’s scary.”

While studying, Katherine put in the hours at Hooters, working her way up to corporate trainer, then travelling around Canada to train other waitresses.

I put it to her that perhaps running a restaurant or going back to the old job as a waitress was where the future might be.

Nice image. You’ve been based in North London for some time now. Do you think of England as home yet?

“I identify as a British mum, as a Londoner. I’m proud to have grown up in Canada and I think it’s given my comedy a unique perspective.” 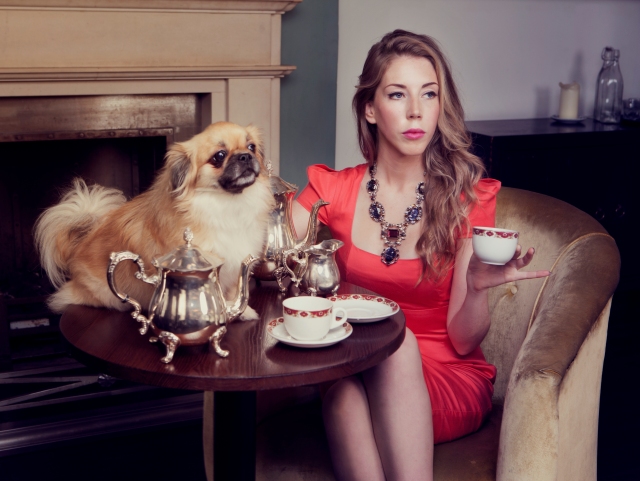 I gather you first came over with a boyfriend, and the comedy outlasted him. Is that right?

Did you have a few quid to fall back on in those early days, if it all went pear-shaped?

“I’m the kind of person who isn’t too proud to work at anything, anytime, anywhere, so I’ll probably always be okay.”

How often do you get back to Canada?

“I take my daughter to visit the family once a year. My sister is getting married in 2015, so we’ll get to go twice!”

Are you at least getting warmer winters now?

From what I’ve read about your formative days in comedy, I gather waitresses’ gags about clubbing seals didn’t go down too well in your homeland.

“Not at Hooters anyway. People can be very sensitive about the political humour of their 19-year-old waitress, in my experience.”

But that at least led to your big break. Can you remember your first five minutes under the lights?

“I can’t, but I do know I had something about my mum getting me tickets to a live taping of Dr Phil. He’s like Canada’s Jeremy Kyle, only he started more like Dr Christian.

“He was respectable at first, but his daytime ‘help’ show has taken a dark turn and is now mostly exploitative.” 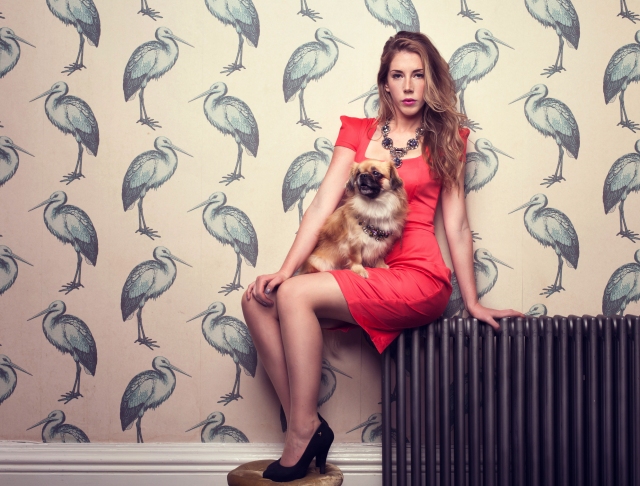 With your dad originally from Cork, would you say there’s a sense of the Irish in your comedy?

“My dad was born in Cork and moved to Canada aged around 30. Both my parents have always been funny in different ways.

“Most of the drunken storytelling that I witnessed growing up came from my mum’s side. Not her though, she managed everyone else beautifully.

“Once, I came down for breakfast and saw the dishwasher pushed against a door, holding it shut.

“My mum was cheerfully making pancakes, and said, ‘Oh hi, honey, the uncles are still up drinking so I’ve trapped them all downstairs….orange juice?’

“She rolled with it and made a joke of everything. Everything!”

As the eldest of three sisters. who was the funniest in your family when you were growing up?

“Oh, definitely me, but I needed them to set me up. We still laugh uncontrollably when we’re all together, but only at funerals or weddings.”

How old’s your ‘flat-mate’ – Katherine’s pet name for her daughter – now? And is she catching you up in the funny woman stakes?

“Violet is five, and she’s the calmest, strongest, kindest soul I’ve ever known. She’s really funny but probably too secure to become a comedian. She’s got absolutely nothing to fight against.”

How old will your daughter have to be before you’ll let her watch all your show?

“Oh, she’s seen all my shows many times. I’m a wonderful influence.”

Have you a favourite of all those panel shows we’ve got to know you for in recent times?

“I love shows for different reasons. Cats means a lot to me because it was my first one. And it’s a hard one so it feels great when it goes right.

“Mock the Week is meant to be a bear pit, but I find it relaxing and fun. I’m becoming more and more of a Dara O’Briain fan everyday. 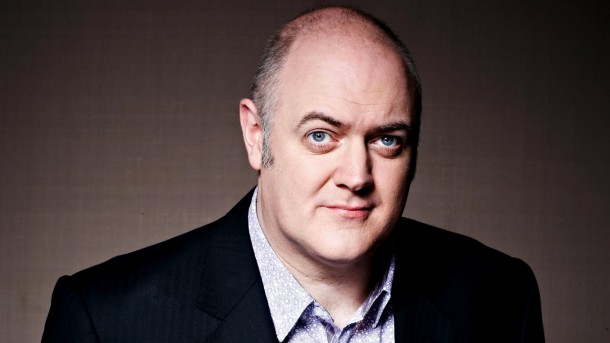 “Buzzcocks is an absolute party! Have I Got News for You always teaches me something. I filmed an episode of Room 101 recently and had a lovely time with that.”

What’s the bigger accolade – your Nivea Funny Women Award or the Amused Moose Laugh-Off runner-up prize you managed back in your homeland?

“Neither matters, because I know awards are arbitrary and I probably didn’t deserve them anyway.”

After the luke-warm received comedy Campus, plus past roles in Episodes and Don’t Sit in the Front Row (with Jack Dee), have you any more TV sitcoms lined up?

I gather you’d been writing your own – is one related to your restaurant days?

Was travelling around Canada training waitresses a good breeding ground for comedy?

“I travelled the world doing that and absolutely, it taught me a lot about how powerful it is to treat everyone with respect.

“Everyone has their story. And I learned to stand my ground.” 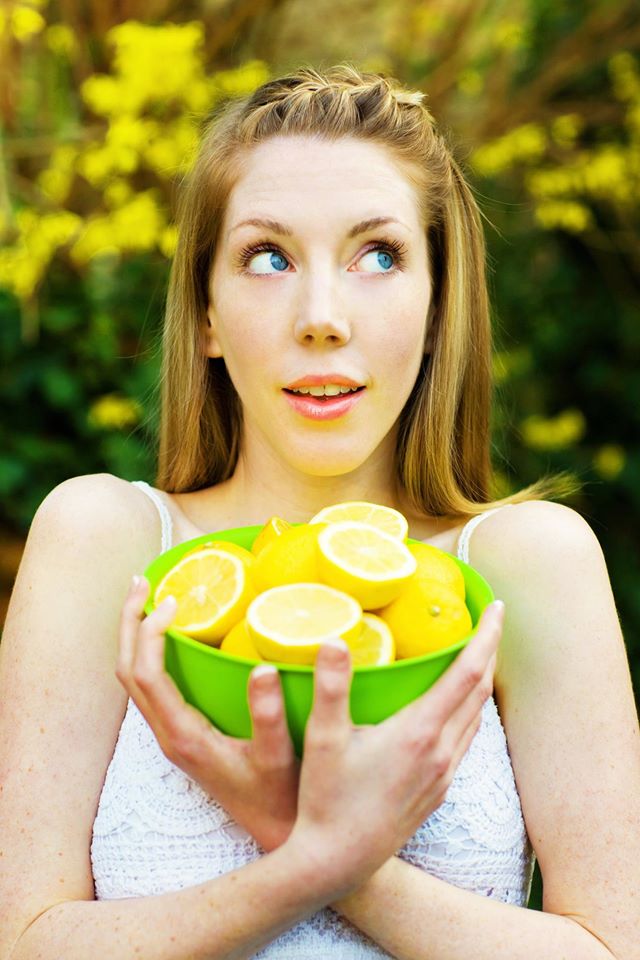 Lemon Squeezy: Katherine gets to grip with Nature’s Candy

After your role on Let’s Dance for Comic Relief, does a spell on Strictly Come Dancing or another of those celeb shows beckon?

Has there been any comeback from Nicki Minaj over your big thigh take on Starships for Let’s Dance?

As an outsider, what’s the difference between the North and South of England for you?

“The accent up North is better. They make pies with meat in the North, which worries me, but I love the people because they seem a little more Canadian.”

You’ve played a fair few North-West venues now – which are your favourites?

“North West is Kim & Kanye’s daughter. That’s all I can think of now.”

Finally, not only are you at Lancaster’s The Dukes, but also Preston’s 53 Degrees before your tour ends with two nights in Reading. So what can we expect on each occasion?

“My new show, Glam Role Model, looks at pop culture news, and the idea that for many people, celebrity is a religion. It’s a big deal. So it matters who we put in those roles.”

Meanwhile, ticket details for Katherine’s shows at Lancaster’s The Dukes, Preston’s 53 Degrees and Reading’s South Street can be found at www.livenation.co.uk.

This is a revised version of a Malcolm Wyatt interview for the Lancashire Evening Post, published on Thursday, December 11, 2014.

A freelance writer and family man being swept along on a wave of advanced technology, but somehow clinging on to reality. It's only a matter of time ... A highly-motivated scribbler with a background in journalism, business and life itself. Away from the features, interviews and reviews you see here, I tackle novels, short stories, copywriting, ghost-writing, plus TV, radio and film scripts for adults and children. I'm also available for assignments and write/research for magazines, newspapers, press releases and webpages on a vast range of subjects. You can also follow me on Facebook via https://www.facebook.com/writewyattuk/ and on Twitter via @writewyattuk. Legally speaking, all content of this blog (unless otherwise stated) is the intellectual property of Malcolm Wyatt and may only be reproduced with permission.
View all posts by writewyattuk →
This entry was posted in Books Films, TV & Radio, Comedy & Theatre and tagged Canada, Comic Relief, Cork, Dara O Briain, Glam Role Model, Hooters, Katherine Ryan, Lancaster, Nicki Minaj, Ontario, Preston, reading. Bookmark the permalink.