I had a feeling Inspiral Carpets would prove the perfect act to bring the curtain down on Preston’s threatened 53 Degrees venue, and they certainly ended their own 12-date December tour in style.

I’m afraid I missed first support Brown Brogues, but enjoyed an impressive set from the black-clad Blossoms, hints of Liam Gallagher and Lee Mavers from frontman Tom Ogden at the heart of this happening Stockport outfit, hopefully with plenty more to hear from them in the near future.

Meanwhile, expectation was growing, heightened as a crew member briefly tested Clint’s keyboard. But we didn’t have long to wait for the star attraction, the herd-like preponderance of ‘moos’ from the assembled drawing them out.

Monochrome provided a winning starting point, and while the sound was a little soupy all night, we knew what we were getting – plenty of passion from a band belying their shelf-life, surely as fresh today as first time round.

From Martyn’s driving bass to Clint’s tell-tale organ and Stephen’s Julian Cope-like vocal delivery, we quickly shifted up the gears.

All that was missing was a pounding floor, but not all the audience seemed to know the new songs, only truly coming alive for following pop explanation mark Joe.

Craig’s military drumbeat called the tune, the band dynamic soon apparent – Clint doing most of the talking, Stephen saving himself for his occasional pogoing, Graham tucked away on the left, Martyn driving the whole shebang.

As with the opener, You’re So Good For Me deserved more crowd participation, the band’s great comeback clarion call taking me back to an earlier love of The Mighty Lemon Drops.

The pace slowed for 1992’s Two Worlds Collide, Stephen clearly at home with his predecessor (and of course his successor) Tom Hingley’s vocal lines, as we caught our breath.

They’re a solid, tight unit too, with plenty of smiles for the audience and band members alike, inspiring the joint to jump for She Comes In The Fall, still a floor-filler a quarter of a century after its initial release.

You can follow a timeline with this five-piece, and while it might date back to that hip US ‘60s underground scene, I’ll name-check The Stranglers instead.

So just a few months after Dave Greenfield led from the rear with his trademark organ at the same venue, Clint seemed to carry on where he left off on A to Z of My Heart.

It’s another track from the self-titled new album displaying those influences on the IC sleeve, alongside what appears to be a fairground spin on the riff from Johnny Tillotson’s Poetry in Motion.

The floor was soon pounding to the might of breakthrough hit This Is How It Feels, jokingly introduced as a new song written in a dub-step style, one inspiring plenty of generational nostalgia.

It was later remarked that someone suffering the after-effects of a good stint down the front sang, ‘This is how it feels when you’re 60’. And while I’d argue a lower age, it was a fair point.

But if ever there was a sign that this is still a vital band with plenty of hooks, Spitfire seems to make up for all that lost time between incarnations, Martyn’s bass rumbling and the front of the hall moving en masse.

Talking of which, Move provided a further wander down Memory Lane, Madchester, Craig then taking us to Sackville before Stephen bounced his way through a rip-roaring Find Out Why.

Away from the singles there are plenty of new potentially-commercial nuggets too, with Calling Out To You just one great example.

It was time for the guest appearances then, and while we couldn’t quite see him behind the speaker stack, I definitely heard Manc legend Mark E. Smith introduce a throbbing I Want You.

Clint asked us what time it was – the Sunday curfew approaching – and one punter tried to hoodwink him into believing it was only half nine. Like us, he clearly didn’t want them to stop.

But time was ebbing away and another esteemed caller was waiting in the wings, John Cooper Clarke, the Bard of Salford – again via Clint’s techno-trickery – supplying his winning verse on the glorious Let You Down.

The band’s new single, already a big hit with this scribe, didn’t disappoint, that bass-line again bringing to mind the Droppies’ Tony Linehan and further back Teardrops-era Cope, the song underpinned by Clint’s roving keys as Dr Reliable saw us out.

After a brief refill they came back, the new album’s brooding Human Shield building nicely before 1992’s Dragging Me Down, Clint’s memorable riff seeing us in, the venue alive for its triumphant chorus. 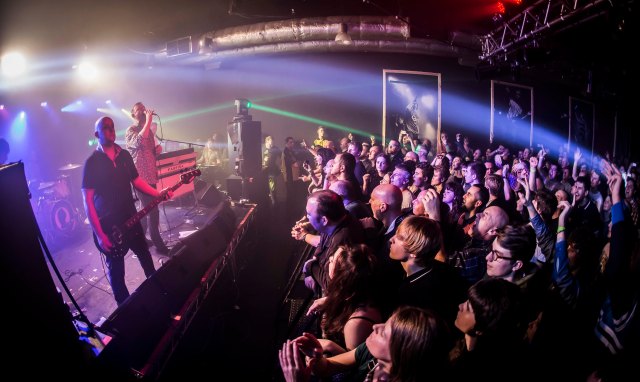 So where to finish but another sumptuous pop moment, Saturn V, its Mysterians-like keyboard intro and Graham’s chop guitar providing the platform for the band to go out in style.

While 53 Degrees’ future may be in doubt, please don’t wait so long to come back, lads. For this treasured ‘cool ass five’ have plenty of good times ahead of them.

For a recent interview with Inspiral Carpets lead singer Stephen Holt on this blog, head here.

Also, check back to this review for some live shots from Ian Rook as soon as we can get them on!

And for the very latest from Inspiral Carpets and their plans for 2015, try their official site here.

A freelance writer and family man being swept along on a wave of advanced technology, but somehow clinging on to reality. It's only a matter of time ... A highly-motivated scribbler with a background in journalism, business and life itself. Away from the features, interviews and reviews you see here, I tackle novels, short stories, copywriting, ghost-writing, plus TV, radio and film scripts for adults and children. I'm also available for assignments and write/research for magazines, newspapers, press releases and webpages on a vast range of subjects. You can also follow me on Facebook via https://www.facebook.com/writewyattuk/ and on Twitter via @writewyattuk. Legally speaking, all content of this blog (unless otherwise stated) is the intellectual property of Malcolm Wyatt and may only be reproduced with permission.
View all posts by writewyattuk →
This entry was posted in Music and tagged 53 Degrees, Blossoms, Clint Boon, Craig Gill, Graham Lambert, Inspiral Carpets, Julian Cope, Martyn Walsh, Preston, Stephen Holt, The Mighty, The Stranglers, The Teardrop Explodes, Tom Hingley. Bookmark the permalink.