Squeeze – Cradle to the Grave – a writewyattuk review

Posted on September 23, 2015 by writewyattuk

Crossing Over: Squeeze enjoy a day out at the Kent & East Sussex Railway in Tenterden (Photo: Rob O’Connor)

Squeeze are back, some 17 years after the rather disappointing Domino, with a brand new set of songs. And they’re everything I might have hoped for.

In the same sense that I wish The Beatles’ Let It Be hadn’t followed Abbey Road (I know, technically much of it was completed before, but …), I always felt Ridiculous – 20 years old in a couple of months – would have made a better swansong for this accomplished South East London outfit.

But that’s all by-the-by now, because we finally have Messrs Difford and Tilbrook back in harness and again coming up with the goods. And while this – Squeeze’s 14th studio album, recorded at 45 RPM Studios in Charlton – is on the face of it a mere soundtrack, it’s far more than that.

If you’re not up to speed with Cradle to the Grave, I should explain that it’s Squeeze – with Chris Difford and Glenn Tilbrook joined by Simon Hanson on drums, Stephen Large on keyboards and Lucy Shaw on bass, although John Bentley also features here – delivering the tunes to go with the BBC series of (almost) the same name, based on Danny Baker’s immensely enjoyable autobiography Going to Sea in a Sieve.

But if that suggests a standard who-you-know commission – the producers putting together Danny (who wrote the TV adaptation with Jeff Pope) with some fellas just around the corner from his Rotherhithe roots – think again. It turns out that it was Glenn who first approached Danny, raving about the book and wanting to contribute. What’s more, the end result proves very much a two-way street – the songwriters inspired by the author’s work, and vice versa.

We certainly get off to a perfect start on this Tilbrook and Laurie Latham-produced platter, the evocative album and series title track, Cradle to the Grave, seeing Glenn let loose on ukelele, his chop chords bringing to mind everything from Paul McCartney on A Day In The Life to ELO’s Mr Blue Sky and Paul Weller’s Stanley Road. There’s plenty of Squeeze there too, the call and response chorus – much of the band chipping in on the vocals – giving it all a mighty spiritual lift. 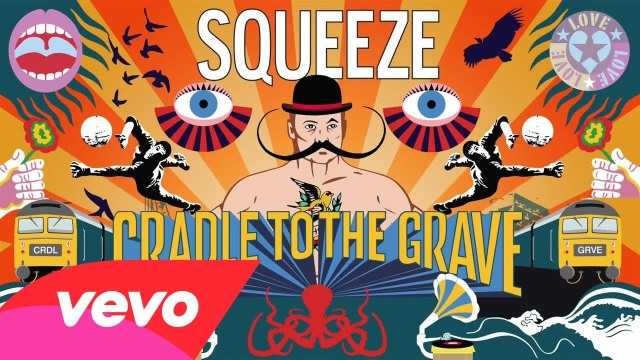 Nirvana threw me at first, its piano intro reminiscent of The Boomtown Rats’ I Don’t Like Mondays, but that soon gives way to lilting pop-disco, its trademark Tilbrook key changes and hooks neatly augmented by Barry White’s Love Unlimited Orchestra-like strings. Then there’s Difford’s deep harmonies, again reflecting past Squeeze works. But why not? This is after all as much a celebration of the band as its ’60s and ’70s themes.

Tilbrook’s more jarring melodies surface again on Beautiful Game, but it works. Let’s face it, few have successfully caught the spirit of the football terraces and ‘going to the match’ on record, but this comes pretty close, even though it takes a few listens. There’s a touch of less-commercial Neil Finn as well, and further proof that Difford and Tilbrook have honed their songwriting skills away from each other these past two decades, the at-odds couple seemingly less reliant and less easily categorised now.

Happy Days is a joy to behold, and will easily sit on the next best of album (and there have been plenty). It’s certainly more than just This Summer Pt. 2, wonderfully sing-along nostalgic – its bridge giving it a real ’60s feel – and the gospel climax taking us to another level. Think of Madness Wings of a Dove sky-dive and slap it on to a halcyon holiday canvas. Come to think of it, I could see Suggs and co. guesting on a few tracks here, both bands sharing a certain dynamic to cherish.

Open also has that classic near-spiritual Squeeze feel, while harking back to the band’s pre-recording era with something of a mid-70s pop vibe. On the face of it there are too many words and it shouldn’t work, but that winning Difford and Tilbrook songcraft overcomes the odds, Glenn’s glorious guitar break sealing the deal.

Incidentally, if you haven’t caught up with Difford and Tilbrook’s solo work, it’s not too late. If Difford’s 1975 suggested he’s been back in a retrospective mindset for some time, such themes are further explored here with his old sparring partner – to great effect. And there’s another fine example in Only 15, tackling the tried and tested theme of teenage trials and tribulations, putting me in mind of tales from behind the chalets on Camber Sands (and at Waikiki) expressed in 1980. And it’s clearly a period that resonates with us and the band.

Sometimes there’s a danger that all this nostalgia will overwhelm us, and it would be easy to  take a critical sneer, contemplating the classroom talk of Top of the Form, not least its name-checks for Starsky and Hutch, PE lessons and roast dinners. But it’s honest and never dressed up as anything it shouldn’t be. In fact, talking of dressings, the ‘fish on Friday’ line reminds me of ex-bandmate Jools’ crawfish gumbo’ on 1989’s Dr Jazz.

Sunny is a rewrite of recent live favourite Tommy, echoing not only The Beatles’ Eleanor Rigby but also offering plenty of Ray Davies-type introspection, while delivered in an unmistakably Squeeze-esque fashion and reminding me of XTC’s emotionally-draining 1,000 Umbrellas on 1986 masterpiece Skylarking. And it’s the song that lodged in my head after my first three listens.

I keep mentioning a certain Liverpudlian four-piece, and there’s a touch of George Harrison guitar under-pinning Haywire, before a more country feel takes over, as if Labelled with Love was being covered by Ireland’s Americana-indie crossover favourites The Thrills, presumably with Melvin Duffy adding the pedal steel.

Honeytrap is perhaps the closest we get to the band playing with a little prog sensibility in Danny Baker’s honour, the listener taken on an epic trip from the early electronica of The Tornados’ Telstar, through a little Middle of the Road and Rick Wakeman towards some Dave Greenfield-fuelled Stranglers technoise (have I just coined that term?). We’re not done yet either, Glenn and Chris’ vocals then punctuated by Dr Feelgood-like pub r&B harmonica (from Nine Below Zero’s Mark Feltham) before a synthesised wig-out and – as we continue to span the genres – duelling ’70s guitars, all perfectly complementing this ensemble entreat. It’s an enjoyable romp, and I’d wager this is Squeeze having as much fun in the studio as they’ve had for many moons.

And then we’re away with the equally-evocative Snap, Crackle and Pop, a further sun-baked snapshot, its wistful lyrical verses giving rise to a mighty crescendo of a chorus, all the while leading us to an emotional guitar and strings play-out. To mention the Fab Four one more time, this could easily be The End, but I’d prefer to think this is the album finale that suggests further inspirational collaborations between Chris and Glenn, who clearly remain more than capable of making fantastic music together, their recent solo forays adding further depth.

In short, I’m thinking not so much an epitaph as a renewal of vows. Welcome back. 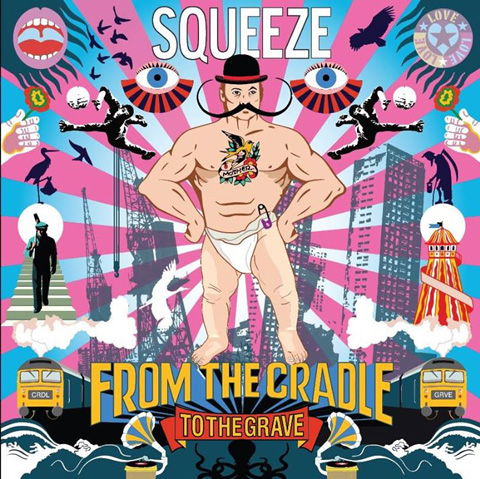 Cradle To The Grave is released on Friday, October 2nd, on the Virgin EMI label.

For the recent writewyattuk interview with Chris Difford, head here.

A freelance writer and family man being swept along on a wave of advanced technology, but somehow clinging on to reality. It's only a matter of time ... A highly-motivated scribbler with a background in journalism, business and life itself. Away from the features, interviews and reviews you see here, I tackle novels, short stories, copywriting, ghost-writing, plus TV, radio and film scripts for adults and children. I'm also available for assignments and write/research for magazines, newspapers, press releases and webpages on a vast range of subjects. You can also follow me on Facebook via https://www.facebook.com/writewyattuk/ and on Twitter via @writewyattuk. Legally speaking, all content of this blog (unless otherwise stated) is the intellectual property of Malcolm Wyatt and may only be reproduced with permission.
View all posts by writewyattuk →
This entry was posted in Books Films, TV & Radio, Music and tagged Chris Difford, Cradle to Grave, Cradle to the Grave, Danny Baker, Glenn Tilbrook, Happy Days, Lucy Shaw, Madness, Simon Hanson, Squeeze, Stephen Large, The Beatles. Bookmark the permalink.

2 Responses to Squeeze – Cradle to the Grave – a writewyattuk review