A weekend to savour (pt. II) … The Undertones – Kentish Town, The Forum

What a weekend, with Friday’s blinding set from The Vapors in Liverpool followed by a road-trip to Kent for a rare Woking FC away win, then up to the smoke for The Undertones’ 40th anniversary tour finale.

That said, let’s get the miserable stuff out of the way first, as I’m still kicking myself for not getting in earlier and working my way down the front, the snob in me not so keen on sharing this special moment with such a big (sell-out) crowd.

Yet while I might have preferred a ‘secret gig’ in The Bull and Gate next door, I certainly don’t begrudge the band the fact that all these years on they can still fill a place this size. That’s some going. And while I’d have preferred something more intimate, I had plenty of chances to pick more of a backwater during this 26-date six-month ‘jaunt’ (other than a memorable evening at Chester’s Live Rooms in June, reviewed here).

Compared to The Vapors’ 35-year hiatus (after barely four years together initially), it seems like The Undertones never really left us, despite that 16-year gap between Feargal Sharkey’s last shows out front in ’83 and the start of the Paul McLoone era in ’99. And while we were celebrating 40 years since those early Derry appearances, I was celebrating 35 since my debut (Positive Touch tour, mid-June ’81, Guildford Civic Hall).

My own key moments were mostly up the A3 in London, not least those Lyceum and Crystal Palace FC farewells in the summer of ’83, the first post-Sharkey shows outside Derry in 2000 at Harlesden’s Mean Fiddler and the Fleadh, Finsbury Park, and a later date at The Garage in Highbury. So a venue where I saw the O’Neill brothers with That Petrol Emotion in ’87 and ’88 (in its Town & Country Club era) seemed an apt choice for this tour’s finale.

My mood on arrival wasn’t helped by a late arrival, missing out on a first chance to see Cork’s Sultans of Ping FC in 24 years (Aldershot Buzz Club, October ’92). Put that down to traffic woes – it seems to have got far worse since my first regular trips ‘up town’ in the mid-80s. And then there were the bar prices – enough to make anyone from outside the capital weep. Three (not even full) plastic beakers of Old Speckled Hen for £16.50? Are you having a giraffe?

So there I was, nursing my ale, struggling to get much closer than the sound-desk to the action, surrounded by less committed punters, shall we say. But help was at hand from Derry’s finest, on a night when few acts could have successfully lifted my spirits. And I swear The Undertones can still raise the dead on their night.

Higher Ground: The view from above at The Apex, Bury St Edmunds (Photo: Kate Greaves)

From the opening chords of Jimmy Jimmy to Jump Boys, Whizz Kids, I Gotta Getta and onwards, they were on top form, although I struggled at first, a fair few around me latching on to the bigger hits but generally nonplussed with the rest. It didn’t help that someone to my right was shouting, ‘Jimmy Jimmy, oh!!!’ after every line. But as the night wore on I successfully channelled the vibe – managing to work my way down the front, at least figuratively speaking.

And what’s not to like when you can look up and see Damian and John flanking the stage, Billy working away at the back. Paul preening in the centre, and Mickey wise-cracking by his side? Yes, there were moments when my neighbours were a little lost amid less celebrated songs like Dig Yourself Deep (‘If you don’t know this one, don’t worry, it’ll be over in one minute 52 seconds,’ said Paul) and Much Too Late. But they loved the bigger hits, so fair play. In fact, they couldn’t push that ‘record’ button on their phones fast enough at times.

On a dark and miserable winter’s night, Here Comes The Summer offered us a few rays of sunshine for the soul, while Tearproof, Hypnotised, Family Entertainment and Nine Times Out of Ten were heaven-sent. And although there should have been a bigger surge from the back for (relatively) modern classic Thrill Me and the ever-awesome Male Model, there was a genuine seismic shift for Teenage Kicks. And from there, where but True Confessions?

Pretty soon we had punk rock exclamation mark You Got My Number (Why Don’t You Use It?) and Girls That Don’t Talk, before the mood shifted for the delightful Wednesday Week and fellow ‘slowie’ Julie Ocean, the pace cranked up again for She’s A Runaround, Listening In and Get Over You, the band bidding us farewell but in no way finished.

Along the way there was also the Heartbreakers’ Get Off The Phone, Billy’s Third (‘This was our drummer’s third song, he sold the first two to The Beatles,’ said Mickey), It’s Gonna Happen, The Love Parade, and When Saturday Comes, which it clearly had. And what an encore – from the tell-tale opening riff of I Know A Girl they never let up, My Perfect Cousin going down a storm before Top Twenty gave rise to the song it namechecks, T-Rex’s Sold Gold Easy Action, another special moment.

Still they weren’t done, this 10-legged jukebox of delights giving us Girls Don’t Like It before they went mad down the front for Mars Bars. I thought that was surely it. How do you top that? But a genuinely lovely moment followed, John Peel’s dulcet tones coming over the PA, introducing ‘the best record in the whole history of the world ever’, barely half an hour after its last airing.

Twice in one evening, with such a great back-catalogue to delve into? Well, if it was good enough for Peel, it was good enough for me … and definitely worked. What’s more, it was really the only way to end this mammoth tour, on a night when we had more than 30 songs to marvel at. Thanks fellas, and here’s to the 41st anniversary jaunt. 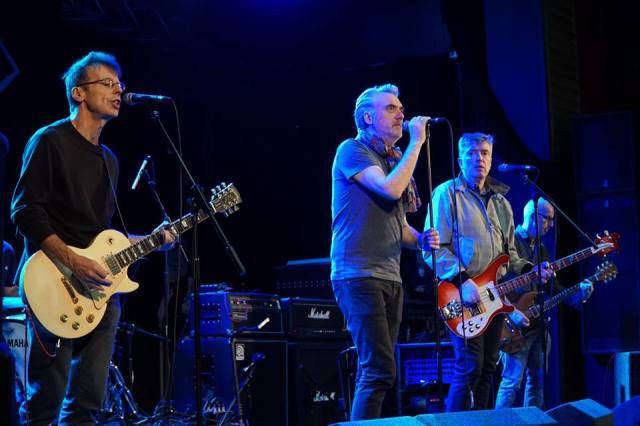 For a whole host of Undertones-related feature-interviews (including those with Mickey Bradley, Billy Doherty, Paul McLoone and Damian O’Neill), reviews and general ramblings on this site, type ‘Undertones’ into the search engine and see what happens.

With thanks to lighting supremo Kate Greaves for the use of the live and soundcheck photographs from the 40th anniversary tour.

A freelance writer and family man being swept along on a wave of advanced technology, but somehow clinging on to reality. It's only a matter of time ... A highly-motivated scribbler with a background in journalism, business and life itself. Away from the features, interviews and reviews you see here, I tackle novels, short stories, copywriting, ghost-writing, plus TV, radio and film scripts for adults and children. I'm also available for assignments and write/research for magazines, newspapers, press releases and webpages on a vast range of subjects. You can also follow me on Facebook via https://www.facebook.com/writewyattuk/ and on Twitter via @writewyattuk. Legally speaking, all content of this blog (unless otherwise stated) is the intellectual property of Malcolm Wyatt and may only be reproduced with permission.
View all posts by writewyattuk →
This entry was posted in Music and tagged Billy Doherty, Damian O'Neill, Feargal Sharkey, Heartbreakers, John O'Neill, John Peel, London, Mickey Bradley, Paul McLoone, Teenage Kicks, The Undertones. Bookmark the permalink.