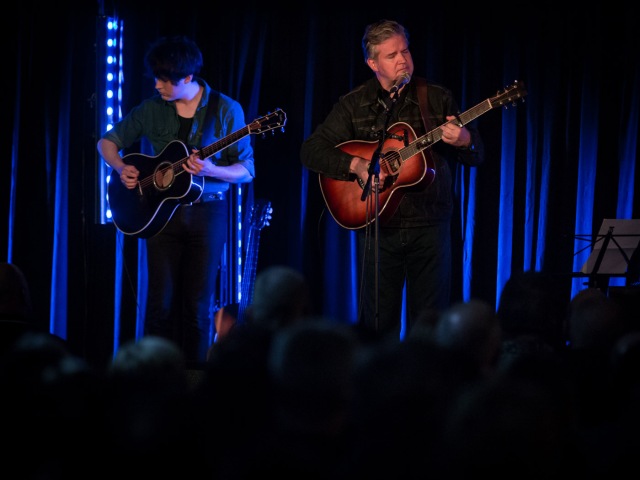 We were two songs in on Monday night before our special guest deigned to talk to us, fixing us with something of a 1,000-yard stare while sussing out his audience before announcing, ‘You’re not getting any younger either’.

It was a defining moment, the ice well and truly broken. Perhaps this wasn’t the Lloyd Cole we thought we knew after all, that moody demeanour and ‘trademark frown’ suggested all those years ago maybe just a front.

Yet while any previous grouchiness was maybe a misunderstanding, the quality of the songwriting and delivery was never in doubt as we revisited the pick of the first dozen years of his recorded output over a magnificent two-hour double-set.

Initially it was just LC and guitar, our first reminder of a wonderfully-unique voice heard on the first Commotions LP’s Patience then Perfect Blue from the follow-up, before a fresh arrangement of that wondrous debut’s mighty title track Rattlesnakes.

A retrospective set was given further poignancy by his choice of ‘in memoriam’ covers, starting with Prince’s Sometimes it Snows in April.

Loveless from his 1990 debut solo LP was next, followed by a plug for a ‘mostly brilliant’ new boxset covering the first 10 solo years. His understatement, not mine.

Back in loveable grouch territory, he told us he’d happily sign anything after, but warned us against selfies, reminding us we wouldn’t know how to work our cameras without our children there. So true.

From the last LP on parade, ‘95’s Love Story, came I Didn’t Know You Cared and Love Ruins Everything, Lloyd explaining how ‘trying to look neutral’ moodiness backfired and had him mistaken for miserable.

Lost Commotions track Lonely Mile showed that band’s strength in depth, while ‘85’s Pretty Gone‘s surging play-out was even better with its added nod to The Beatles’ Norwegian Wood.

After discussing his eyesight, ranting about how ‘small print is ageist’, there were neat solo takes on ‘87’s My Bag, ‘91’s Butterfly and ‘93’s You’d Like to Save the World.

He even built in Famous Blue Raincoat and a ‘Thanks for the songs, Mr Cohen’ line, before finishing his opening spot with plenty of audience participation on penultimate top-40 hit Jennifer She Said.

For the next set he was joined by son Will on second guitar. I say that, but his lad played most of the neat lines and is clearly no slouch in that department, complete with flamenco touches.

Getting going with third Commotions LP title track Mainstream and 1990’s Don’t Look Back, Lloyd quipped how hard it was to find a 24-year-old version of himself …. If he was in Echo and the Bunnymen.

While there is an Ian McCulloch look about Cole Jr., he’s clearly a chip off the old block with that seemingly moody persona, the pair at home picking up the pace on ‘87’s Mr Malcontent.

Lloyd let on, ‘Some of you may know I used to live round here’, before going all Doris Day on us, adding, ‘When I was a little boy, I asked my mother what I will be.’

Yet rather than Que Sera Sera we got another Love Story gem, Like Lovers Do, followed by the glorious Are You Ready to be Heartbroken? from a decade earlier and Cut Me Down from Easy Pieces.

The hits and near-misses keep coming, three more Rattlesnakes cuts – the lyrically-luscious Charlotte Street, breakthrough 45 Perfect Skin and pensive 2cv – reminding us just what a great album that was.

There followed an anecdote about George Formby and the Queen before traces of With Me Little Stick of Blackpool Rock and even mention of Lytham St Annes on 1990’s Undressed.

Four Flights Up worked really well thanks to Dad and Lad’s under-stated guitar duel, while 1990’s No Blue Skies took us back to the early solo years.

There was a reminder for the Polygram moguls of what they turned down on ‘96’s No More Love Songs, Lloyd adding a ’when I was 26 I knew everything’ rider before ‘87’s Hey Rusty, complete with built-in Bruce Springsteen Born to Run outro.

From there, Brand New Friend went down a storm, seguing into a stirring climax with David Bowie’s Heroes.

They came back, Lost Weekend having the joint jumping and a delightful Forest Fire the final flame, those subtle six-string touches from Cole & Son helping ignite an evening of so many great songs. 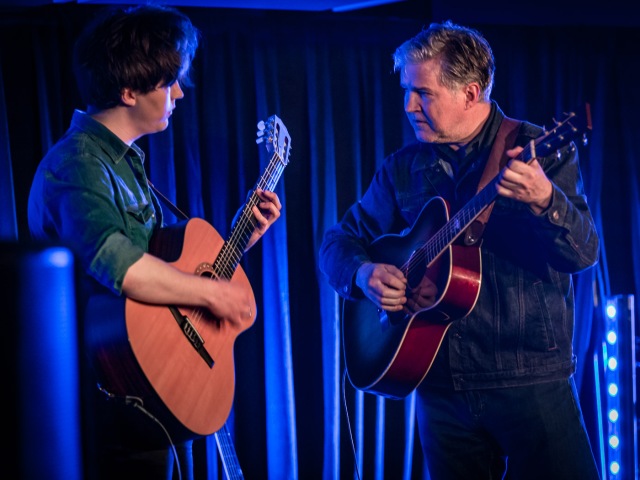 For this website’s recent interview with Lloyd Cole, This One’s From the Hip, head here.

With thanks to Danny Morris, Helen Roughley and all at Preston Guild Hall, and Michael Porter, of the Preston Photographic Society, for use of his photographs.

A freelance writer and family man being swept along on a wave of advanced technology, but somehow clinging on to reality. It's only a matter of time ... A highly-motivated scribbler with a background in journalism, business and life itself. Away from the features, interviews and reviews you see here, I tackle novels, short stories, copywriting, ghost-writing, plus TV, radio and film scripts for adults and children. I'm also available for assignments and write/research for magazines, newspapers, press releases and webpages on a vast range of subjects. You can also follow me on Facebook via https://www.facebook.com/writewyattuk/ and on Twitter via @writewyattuk. Legally speaking, all content of this blog (unless otherwise stated) is the intellectual property of Malcolm Wyatt and may only be reproduced with permission.
View all posts by writewyattuk →
This entry was posted in Books Films, TV & Radio, Comedy & Theatre, Music and tagged David Bowie, Easy Pieces, George Formby, Leonard Cohen, Lloyd Cole, Mainstream, Preston Guild Hall, Preston Photographic Society, Prince, Rattlesnakes, William Cole. Bookmark the permalink.