Sounds from the Other City – Salford St Philip’s Church

Mill Poppers: Queuing outside Islington Mill, Salford, for Sounds From the Other City (Photo: Jody Hartley)

As someone who associates the festival circuit with camping fields, lush greenery, damp tents and mud-caked marquees, I struggled to get my head around Greater Manchester’s latest sell-out ‘celebration of new music, performance and art’.

But on the evidence of the 13th Sounds from the Other City over the May Day weekend, Salford’s a happening place, and hardly the Dirty Old Town referenced by Ewan MacColl all those decades ago. Take for instance Islington Mill, recently threatened with closure, a reminder of a bygone age yet a teeming hive of activity on the day, the event’s throbbing nerve centre.

With so much planned, time was against us sampling more than a handful of locations, so eldest daughter and I fixed on St Philip’s Church’s Hey! Manchester bill and the Angel Centre’s Family Tree happenings. And that turned out to be a top call.

While we missed a couple of early acts, Kent-based folk-rocker Tom Williams and his band offered a neat starting point, their half-hour set building towards the splendid Everyone Needs a Home and a rocking Little Bird. Like most of the acts, there are records out there to catch up on, Tom’s latest LP All Change out later this month and definitely worth seeking out on this evidence. 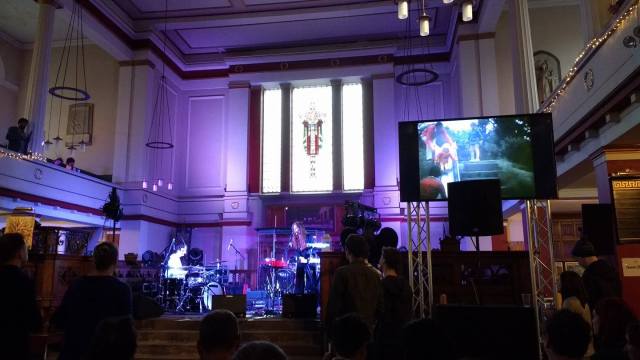 The delightful Hannah Peel was next, The Magnetic North’s chanteuse an electronica starlet in her own right, here showcasing her winning Awake But Always Dreaming album, one of my 2016 highlights.

As it turned out the organisers’ quick turnarounds were tested to the extreme, gremlins in the wiring leading to Hannah and drummer/backing vocalist Daisy Palmer spending as long tuning as performing, mountains of electronic gadgetry severely testing the over-worked techies. But finally they were up and running on the infectious All That Matters, an alternative congregation dancing in the aisle or at least tapping in the pews.

Hannah and Daisy hit their creative stride partway through the title track of the latest LP, and while a multi-instrumental approach led to continued mixing desk dilemmas, a sometimes-soupy sound worked. Our London guests had overcome earlier nerves in true spirit of the blitz style by the time they reached the euphoric Hope Lasts, the harmonies sublime, the playing flawless. And that epic vibe remained for the darkly-emotional Standing on the Roof of the World and a stirring Foreverest, although time was moving too fast and they were gone far too soon, the next act waiting. 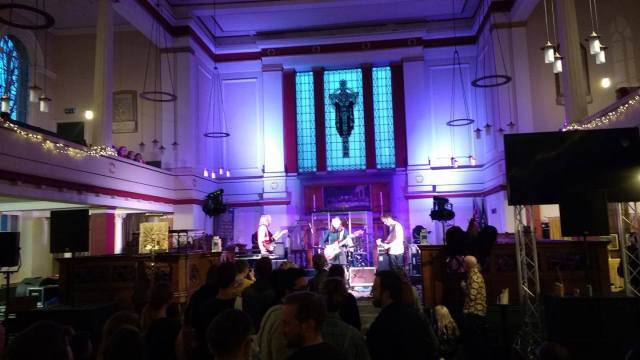 The backstage crew quickly clawed back time, to the point that a Chapel Street walkabout meant we missed the opening of New Zealand visitors Fazerdaze’s set, the awesome Lucky Girl greeting us as we re-approached this impressive 195-year-old place of worship. If you haven’t heard that yet, think Lush fronting New Order. But while Amelia Murray describes her act as ‘girl in bedroom on guitar’, it’s about much more. Check out most recent single Take it Slow for starters. Again, their set was over far too quickly, but hopefully there will be other chances to catch these Kiwi indie dream pop ambassadors soon.

We briefly fled to The Angel to catch Cornish export The Golden Dregs, smaller venue acoustics just right for a rich 60s’-tinged Americana vibe, Ben Woods’ laidback deep vocal and those jangly guitar runs a joy. All this and an album on the way. Meanwhile, back in church, The Proper Ornaments’ replacements Wedding were not standing on ceremony, their laidback vibe more intriguing than the choice of monicker. Incidentally, try net-browsing for that name, adding search terms like ‘band’, see how far you get. 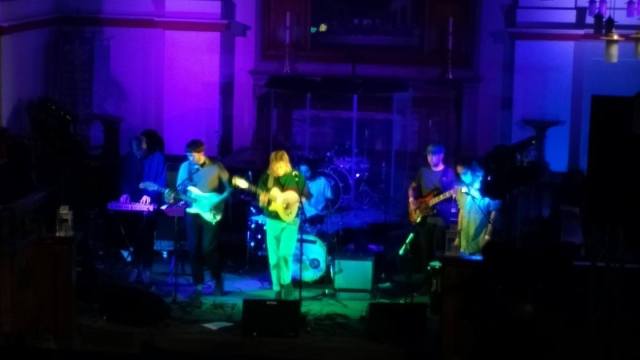 Part-way in, my daughter pointed out the Last Supper model beyond, and I wondered if The Disciples would be a better name considering this six-piece’s look, as much Sea of Galilee as West Coast US. There’s certainly an open road and beach culture filmic feel to the songs, falsetto vocals adding further quality to a psych-folk surf vibe.

On a day of winning contrasts, we popped back to Family Tree for Sheffield three-piece Katie Pham & The Moonbathers, carrying on where the Dregs left off with a pleasing late-night jazzy disco-surf swirl. And given more time, we’d have stepped into the Cathedral for Ex-Easter Island Head, Laura Cannell and the BBC Philharmonic Ensemble, but Our Father Time was against us day-trippers.

Instead we returned to St Philip’s for a rousing finale, once more greeted by the positively-bouncy non-bouncers on the door before taking in a celebrated underground duo along for the ride from Lancaster. Yep, you can’t accuse the organisers of anything but an eclectic mix, no two acts cut from the same cloth, a wholesome feast topped by a generous helping of The Lovely Eggs.

Kind of where Manchester’s own Buzzcocks and The Fall meet Hole, husband and wife pair Holly (vocals/guitar, ex-Angelica) and David (drums/vocals) have a similar penchant for life-affirming anthemic ditties as Cork’s Sultans of Ping FC. That said, in an era when church leaders recognise a need to move with the times, what Salford’s parishioners might have made of a scarf-waving congregation singing along to Fuck It and People are Twats is debatable.

But whether tackling Allergies, treating us to modern classics Don’t Look at Me (I Don’t Like It) and I Just Want Someone to Fall In Love With or an inspirational Ordinary People Unite, The Lovely Eggs put plenty of red wine and grapefruit beer smiles on faces. Having the time of their lives on a rare night away from their little ‘un, they came, they thrilled, they requested Do It To Me, and it was sausage roll thumbs-up all round. Here’s to the 14th such happening.

Totem Attraction: Sounds From the Other City 2017 (Photo: Jody Hartley)

With thanks to Ruth Allan and all at Sounds from the Other City, and to Jody Hartley, Andy Loynes and Molly Wyatt for the photographs.

A freelance writer and family man being swept along on a wave of advanced technology, but somehow clinging on to reality. It's only a matter of time ... A highly-motivated scribbler with a background in journalism, business and life itself. Away from the features, interviews and reviews you see here, I tackle novels, short stories, copywriting, ghost-writing, plus TV, radio and film scripts for adults and children. I'm also available for assignments and write/research for magazines, newspapers, press releases and webpages on a vast range of subjects. You can also follow me on Facebook via https://www.facebook.com/writewyattuk/ and on Twitter via @writewyattuk. Legally speaking, all content of this blog (unless otherwise stated) is the intellectual property of Malcolm Wyatt and may only be reproduced with permission.
View all posts by writewyattuk →
This entry was posted in Books Films, TV & Radio, Comedy & Theatre, Music and tagged Family Tree, Fazerdaze, Hannah Peel, Hey! Manchester, Katie Pham, Salford, Sounds from the Other City, St Philip's Church, The Angel Centre, The Golden Dregs, The Lovely Eggs, Tom Williams, Wedding. Bookmark the permalink.