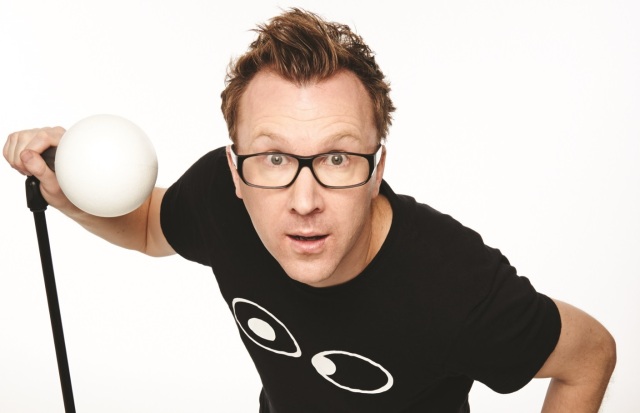 Maddest Shite: Jason Byrne looks for a way out at Southport’s Ramada Plaza

For the first time in a long while I went to a gig and didn’t get the pen and jotter pad out once. There seemed to be no point. I’ve regretted that in the past at comedy shows. Getting home late and trying to re-tell some anecdote to your sleep-deprived better half – probably missing out a key line – you realise you can’t recall much else, sloping off back downstairs, leaving them to think about what time that alarm’s going off in the morning. A couple of pints on the night – and hats off to my driver on this occasion – may play a part too.

Then the next morning, with that episode only partly forgotten (if at all) you’re asked – possibly with a hint of sarcasm – ‘Have a good time then?’ and you get set to enthuse about the act but struggle to recall anything that sounds at all funny in the cold light of morning to those who weren’t in the audience. The fact that any such recollection would probably involve poor regional accents and a bit of swearing to get the mood across, also rules out most of what unfolded, your children sat with their toast. You know what comes next – that defeated line, ‘Ah, you had to be there, really’. And with that you reach for the cereal and move on with your life.

Just off the Prom at Southport on Wednesday night, in the rather unlikely setting of the Ramada Plaza, it seemed right not to bother scribbling anything down though. Besides, what could I have written? I’m pretty certain Jason only told about three stories the whole night. Not jokes either – he’s no joke man, and why would he have to be? Those are for crackers and pub bores, largely. He’s above that. Genuinely funny, naturally so, and highly personable. And while there was an engaging, vivid tale of him going for a vasectomy in a private house, that took forever to get told, by which time there was certainly no call for a punchline.

You know that tired line sports people use about the importance of the 12th man (or 14th or 16th, depending which code we’re talking, the latter including Gaelic football in Jason’s case)? Well, the crowd played a blinder at this festival outing, with at least a dozen – intentional and unintentional – guesting roles from audience members. That made it really, and while the fact that this particular gig was held in a conference room on the first floor of a hotel worried me at first (not least having to walk past loitering serving staff in the restaurant to reach the desk), I shouldn’t have worried. This was no ‘chicken in a basket’ lay-off from comedy’s past.

There was none of that tired spin on ‘comedians picking on latecomers’ either, except maybe the woman who tried to sneak back in at one stage, Jason wondering if she was a sleep-walking hotel guest. It did cross our minds he was right too. I noted however that when he mentioned her again later that evening, she was beside herself, offering up a real belly laugh. She clearly loved it.

Jason told me a couple of weeks ago (with a link to that interview here), when asked about this particular two-night stand, ‘a lot of time I’ll head round and I’ll have the show in my head, and I’ll think I’ve got to do that and I’ve got to do this. At Southport you might as well get the whole gig and fuck it out of the window, because you’re not going to be able to do it. It’s too much fun talking to them. They tell you the maddest shit, and they heckle you … in a nice way. There’s no nastiness … It’s one of those gigs I don’t have to worry about … It’s very much like, ‘Off you go, Jason, let’s see what happens for the next two hours’, you know.’ And he was spot-on. That’s exactly how it all panned out – the ‘maddest shit’ going down.

I’ll mention one part of the set that really got me. It was inspired by a woman celebrating her 40th birthday, who worked at Starbucks, Jason asking if the Christmas beakers were in yet, then going off on one about the days when his Dad would lift him on to his shoulders to get into the loft to get the festive decorations down. None of that modern loft-ladder shite – just a push-up hatch, then the scariest ‘on your knees’ wander across the beams (never between the beams) to find what you’d gone up there for, the bedroom lamp stretched as far as it would go to add the tiniest bit of ghostly light for you (no extension cables in those days). It was like he’d opened a window on my past, yet talking to my mate on the way back he said he felt the same. Brilliant.

Jason loved it too, so much so that he took up the locals’ suggestion and visited the nearby British Lawnmower Museum the following day. And even if you can’t manage to get to this year’s Southport Comedy Festival finale, there’s always next year. A great atmosphere, and highly recommended.

For the same reason as I mentioned before, it’s pointless talking you through any more of Jason’s routine, but for the benefit of those who turned up on Wednesday (and I say that knowing just how different the Thursday set was likely to be), I’ll quickly mention varying Irish and Merseyside accents and their erotic pull; relative merits of parts of the Wirral; domestic hassles, age and virility; the loneliness of the hotel room and the sounds you hear; Bagpuss, Fingerbobs and Bod; Jason’s magic metamorphosis box; and a first-hand retelling of the night a fella in a wheelchair crowd-surfed to Coldplay at Croke Park. I’ll have forgotten a lot more, but can already see you guffawing. It’s only a matter of time before someone in the vicinity asks why, and you’ll try to explain. Good luck with that.

Grass Roots: Jason Byrne and Bagpuss get to see Eric Morecambe’s lawnmower at the British Lawnmower Museum in Southport

Jason’s latest The Man With Three Brains dates run through to a Southend Cliffs Pavilion Palace Theatre show on Sunday, December 3rd. Ticket prices for all venues are £19.50 or £22 for London shows. For tickets, head to   www.ticketmaster.co.uk or www.jasonbyrne.ie  You can also follow Jason  via Facebook and Twitter.

This year’s 18-day Southport Comedy Festival finishes this Friday night (October 20th) with a show at at Bold Hotel, Lord Street, starring Mike Gunn and Nina Gilligan, hosted by Brendan Riley, then on Saturday night (21st) with a sold-out Jason Manford show at Southport Little Theatre. That was set to be followed the next night by another Jason Manford ‘work in progress’ date, but that’s been rescheduled for Sunday, January 21st. For more details and tickets visit the festival website or follow the action via Facebook and Twitter.

A freelance writer and family man being swept along on a wave of advanced technology, but somehow clinging on to reality. It's only a matter of time ... A highly-motivated scribbler with a background in journalism, business and life itself. Away from the features, interviews and reviews you see here, I tackle novels, short stories, copywriting, ghost-writing, plus TV, radio and film scripts for adults and children. I'm also available for assignments and write/research for magazines, newspapers, press releases and webpages on a vast range of subjects. You can also follow me on Facebook via https://www.facebook.com/writewyattuk/ and on Twitter via @writewyattuk. Legally speaking, all content of this blog (unless otherwise stated) is the intellectual property of Malcolm Wyatt and may only be reproduced with permission.
View all posts by writewyattuk →
This entry was posted in Books Films, TV & Radio, Comedy & Theatre and tagged Bagpuss, Coldplay, Croke Park, Jason Byrne, Jason Manford, Lawnmower Museum, Southport, Southport Comedy Festival, The Man With Three Brains. Bookmark the permalink.