“Here comes a love song … there goes the banister!”

Time moves on, and some of us aren’t getting any younger (says a bloke who turned 50 two days after this special happening), with none of us beyond nostalgia, not even an outfit that’s tended to move forward rather than dwell on the past in recent years.

Think Blancmange existed just from 1979 to 1986? Wrong. You’ve got some catching up to do, Neil Arthur and (initially) Stephen Luscombe reconvening 25 years later, the former still at the helm now, having survived some of those big coastal surges headed his way in the video for 1983 hit, Waves.

From 2011’s Blanc Burn (‘Up the Rovers’, as Neil told us on Wednesday, potentially alienating half of his audience) and 2013’s reimagining of Happy Families to the four albums that followed these last two years, right up to Unfurnished Rooms, there’s been little reason to just reminisce. But a mid-week sell-out homecoming for Neil at Darwen’s intimate Library Theatre perfectly fused old and new, re-energising past material and treating us to plenty more modern gems.

It seemed apt that beforehand we had a new find on hand, Tyneside outfit Transfigure proving their potential, a promising set suggesting they’ve a fine future. 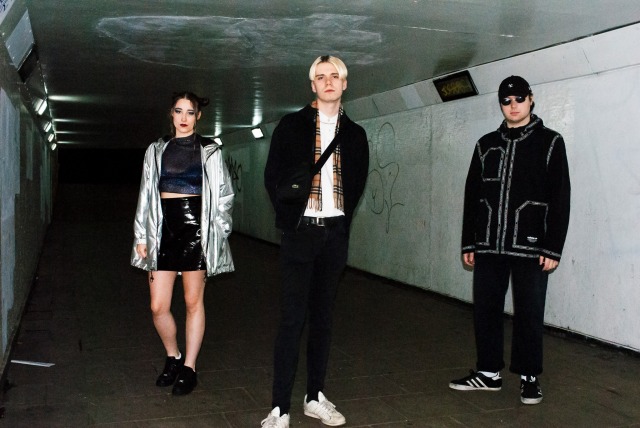 At first it seemed a little awkward, the guitarist with the blond highlights looking anywhere but our way and his baseball-cap clad comrade stuck firmly behind flight case-held keyboards. But then out bounded the eye-catching Grace, in space-age raincoat and bunches, looks matched by a fine vocal. I read a description suggesting nods to St Etienne, Pet Shop Boys and New Order, and can see all that, but will put my own spin here, namechecking Dubstar, Electronic and The Cure. A winning combination. I look forward to hearing more.

Soon after, the lights were down, an aural backdrop of analog synth setting the tone as Neil’s voice cut through over the PA, a track from the First Light album by Fader – his extracurricular project with Unfurnished Rooms producer Benge – giving us subtle local colour on Laundrette, linked to nearby Nelson Street and a cycle that repeats. And as the fader dropped, two-thirds of Blancmange, 2017-style, appeared, Oogoo Maia providing keyboard as Neil raised the hairs on the back of the neck with The Day Before You Came.

Where the original Andersson/Ulvaeus masterpiece tugs the heart in its melancholic intensity, Neil’s latest take is just as starkly beautiful and tender, yet even more stripped back and so deserving of its place here after all these years. I briefly wondered where they could possibly go from there, but then on tip-toed David Rhodes, shoes shed and guitar donned, bare feet soon working pedals as our trio gave us the new LP’s title track.

After two songs, Neil confessed his love of his hometown, memories stoked for the front-man as he recalled visits to the venue in his first school days, the stage decked out with crocuses and hyacinths. As he spoke of being back on his old patch, the familiar sight of the tower and moors beyond, stirred emotions proved too strong, our friend having to step away from the mic.

“Before a word was spoken, my heart was broken”

Recomposed, we had the wonder of the new album’s We Are the Chemicals, up there among the finest songs this year, just one of many LP highlights. His phone went off mid-song – his caller no doubt taken aback when he answered – but we were soon back to a pre-mobile technology era, further Mange Tout cut Game Above My Head as fresh today as ever.

Neil’s not averse to throwing in curve-balls, and Commuter 23 opener Red Shift (Blame Thrower) marked a first dark moment, unleashing an almost John Lydon-esque snarl part-way in. Then came another Unfurnished Rooms highlight, the madly-infectious What’s the Time, so deserving of being a hit. ‘List all the things you’ve never owned, list all the things you’ve never said’. Inspired.

Of course, he’s always had a way with words, although he gives the impression he’s from a town where he’d have been told if he’d ever got above his station, recalling an over the wall enquiry from neighbour Muriel back in the Top of the Pops days, ‘Eh Neil … ‘up the bloody tree’?’

Being Boiled-era Human League came to mind with Commuter 23’s Last Night I Dreamed I Had a Job, even incorporating Donna Summer’s I Feel Love in there. Still the audience mostly sat, tapped and clapped, part of me wanting to rip out the seats, rock’n’roll style, getting the joint moving. A band once so big on the dance scene deserved a moving floor.

Commuter 23: Neil Arthur, never allowed to get above his station with Blancmange

They were more involved with the wondrous Waves, although Neil let on he’d had to pull back from his big ‘Goodbye!’ moment as someone was giving it their all down the back, half a beat ahead, our star turn briefly losing his way. New track Gratitude was next, Neil again exorcising demons, telling us after, ‘I really enjoyed that’, before another Unfurnished Rooms high, Anna Dine. Did I mention they deserve some new hits?

Not all the old songs made the cut first time, John Peel session track Running Thin one that got away but recently refurbished and deserving of wider circulation on this evidence. Yet I Can’t Explain reminded us that the angsty songs have been there since the start, Neil talking about hi’self in the third person post-song, announcing, ‘Purge yourself, Arthur!’

But lest this was all getting a little too introspective, help was at hand, a local lad suggesting he ‘Crack on!’ Which he did, with Maia, Arthur and Rhodes in sweet synchronicity on the slow-build powerhouse masterpiece that is the new LP’s Old Friends.

Then came the night’s expected big moment, the audience out of their seats, transported to 1982, when Neil and Stephen were Living on the Ceiling. Most of the crowd had to sit down again then (my other half later remarked how many were having to take mid-set loo breaks). But the lady giving her all down the front was inspired to stick around for I’ve Seen the Word. And fair play to her.

“Feel me now, feel the pain, take the blame, feel the strain”

The end of the set was pretty much nigh, Feel Me the perfect warm-up for the climax, Neil adding tantalising sonic glimpses of Hot Chocolate’s Every1’s a Winner, M’s Pop Music and Grace Jones’ Pull Up to the Bumper en route. Glorious. I half expected the Talking Heads’ Once in a Lifetime too, King Arthur in his element and Rhodes stretching those in-steps.

The gathered were back on their feet for the finale, Blind Vision, our guests returning once more after the briefest backstage sustenance for another mighty dance work-out, Don’t Tell Me seeing us off on a high. That wasn’t strictly it though, Neil and co. sticking around to meet and greet after a top night out just beyond the Circus (you know – by bus stop, where Woolies were).

The last transport had possibly already long gone, but it was worth hanging on to that return ticket. We were soon heading back over Tops and home, a great night in the company of a special band behind us, keen to do it all again sometime soon.

For the most recent writewyattuk interview with Neil Arthur, head here, and for a review of Unfurnished Rooms, follow this link.

To find out more about Transfigure, and to check out their new single Breathe, head to their Facebook page here.

A freelance writer and family man being swept along on a wave of advanced technology, but somehow clinging on to reality. It's only a matter of time ... A highly-motivated scribbler with a background in journalism, business and life itself. Away from the features, interviews and reviews you see here, I tackle novels, short stories, copywriting, ghost-writing, plus TV, radio and film scripts for adults and children. I'm also available for assignments and write/research for magazines, newspapers, press releases and webpages on a vast range of subjects. You can also follow me on Facebook via https://www.facebook.com/writewyattuk/ and on Twitter via @writewyattuk. Legally speaking, all content of this blog (unless otherwise stated) is the intellectual property of Malcolm Wyatt and may only be reproduced with permission.
View all posts by writewyattuk →
This entry was posted in Books Films, TV & Radio, Comedy & Theatre, Music and tagged Blancmange, Darwen, David Rhodes, Don't Tell Me, Fader, lancashire, Library Theatre, Living on the Ceiling, Neil Arthur, Oogoo Maia, The Day Before You Came, Transfigure, Unfurnished Rooms. Bookmark the permalink.