Granted, I can’t imagine Martino’s Here In My Heart or fellow top-five acts Nat King Cole, Bing Crosby, Guy Mitchell and Rosemary Clooney raised the pulses of youth in 1952. As John Lennon put it, ‘Before Elvis there was nothing’. But in time we caught on, a golden era following. And while I tend to baulk at much of today’s chart fodder, we’re in safe hands with Grace Chatto and Jack Patterson’s crossover electronica act Clean Bandit. 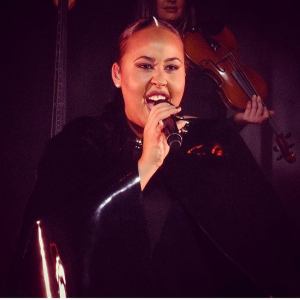 For me the popularity of shows like Pop Idol, The X-Factor and Britain’s Got Talent – not least the farce of the annual battle for the Christmas No.1 – suggests we’re on borrowed time, all those manufactured brands a slap for the true spirit of pop as much as New Faces, Opportunity Knocks and those dreadful Summertime Specials in the past.

I admit my punk attitude to such shows ensures I tend to sneer (John Lydon-style) at prime-time TV schedules, but I did dip in and out of The Voice early on, respecting the worth of advice from the likes of Tom Jones rather than Mickie Most-esque promoters like Simon Cowell or Louis Walsh. Besides, genuine talent occasionally emerges, even if acts still need the right songs to find a more promising path.

Kirsten Joy, one such example, put in a top guest vocalist shift at Manchester Academy this week, co-fronting Clean Bandit with further impressive find Yasmin Green. A singer-songwriter in her own right, Kirsten featured in 2012’s inaugural The Voice UK series, championed by Jessie J, six years after performing (then still a teenager) with the ACM Gospel Choir, industry recognition leading via various session and touring roles with big name acts to Clean Bandit’s door.

My youngest daughter – who joined me on the night – introduced me to Clean Bandit, and from the start it was clear this was no bubblegum pop outfit, with Grace, Jack, brother Luke Patterson and (since departed) Neil Amin-Smith fusing electro-pop, electronica and classical elements amid those more commercial hooks. And while their more commercial numbers are a tad too mainstream for this gnarly cynic, those hits worked really well here, the live set-up adding real balls.

This is a band that’s done its homework (well, they were studying at Cambridge when it all came together), with nods to the best ‘90s dance. In fact, I came away inspired to dig out some early Pet Shop Boys LPs to show my youngest where I felt they were coming from. Meanwhile, Kirsten and Yasmin’s soulful touches put me in mind of Rowetta and Shara Nelson.

Another hope for the future was unveiled beforehand, Sydney singer-songwriter Starley going down well, her distinctive tones reminding me of Tracy Chapman, only more dance-oriented, although that might just have been down to her Fast Car cover. If you haven’t heard her, start with her biggest hit so far, Call On Me. You’ll probably know it. One to watch, for sure.

Of course, pop’s nothing without a good tune, and Grace and Jack provide that platform, their band and guest singers then taking it up a notch. And regular bursts of Grace’s cello and Stephanie Benedetti’s violin got me thinking I’d love to see this outfit play the same set in a ragged Irish folk style. Just a thought.

If I have one criticism of the recorded output so far, it’s that they don’t bring out what I heard for myself live. There have been exceptions, but sometimes they’re just too safe on record. They don’t really need my suggestions though. The hits keep coming. I just wish the audience moved as well as the girls on stage. But I’d like to think a new generation comes away from their shows inspired enough to head in the right direction.

Opening song Stronger set the tone, the ghost of house music alive and well (and not just because of the oft-repeated cries of ‘Manchester!’ all night), while Cologne showcased their pop sensibilities and Symphony properly brought in the crossover element. As did A&E, their debut single’s funkalypso fusion just as fresh today, given extra earthiness by Grace and Steph’s strings.

Between those numbers, Extraordinary builds towards Introspective-era Pet Shop Boys and Disconnect further heightens their more pounding electronic leanings, rhythm section Sam Skirrow (bass) and Luke (percussion) on form. Meanwhile, next offering Birch was my highlight, the lights low as Kirsten’s haunting vocal and that brooding structure giving off Massive Attack and Portishead qualities. Right up my street.

Come Over is more calypso-pop reggae, the girls working that stage, up close and personal. And then came Rockabye, last Christmas’ chart-topper given major confetti-firing effects treatment. Let’s face it though, they’ll never get that baby to sleep that way.

I’m pleased Telephone Banking still gets an airing (even if further Love Ssega track Mozart’s House was conspicuous in its absence), while the pounding Piece of You kept the party vibe going and Should’ve Known Better inspired a sing-along. And while Grace was absent then, swapping sparkly catsuit for the sweeping cloak, she was back for a triumphant Real Love, Yasmin and Kirsten on a soulful high in Jess Glynne’s absence.

For the encore they switched to matching black and white stripes, Grace, Jack and Luke congregating stage-centre before the rest returned for latest hit I Miss You – top-30 and climbing – then last year’s Tears, before inevitable show-stopper Rather Be sent everyone home happy. 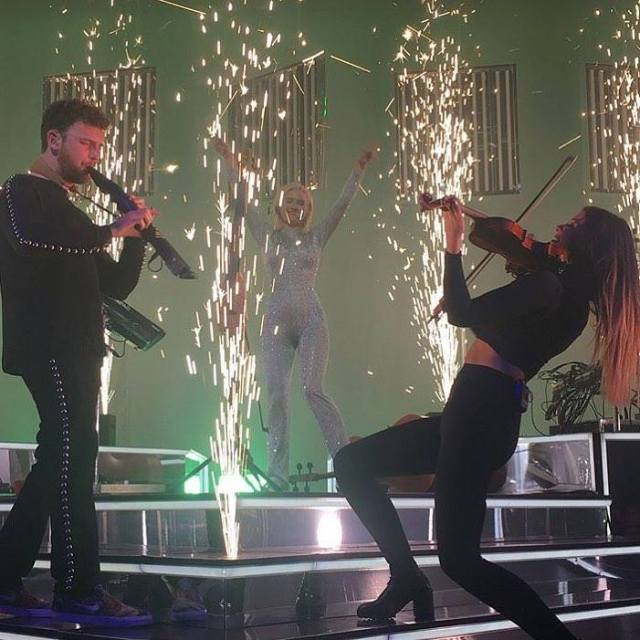 For this site’s feature/interview with Grace Chatto from last month, head here. And for all the latest from Clean Bandit, including details of their North American tour in March and April 2018, head to their official website and  keep in touch via Facebook, Instagram and Twitter.

A freelance writer and family man being swept along on a wave of advanced technology, but somehow clinging on to reality. It's only a matter of time ... A highly-motivated scribbler with a background in journalism, business and life itself. Away from the features, interviews and reviews you see here, I tackle novels, short stories, copywriting, ghost-writing, plus TV, radio and film scripts for adults and children. I'm also available for assignments and write/research for magazines, newspapers, press releases and webpages on a vast range of subjects. You can also follow me on Facebook via https://www.facebook.com/writewyattuk/ and on Twitter via @writewyattuk. Legally speaking, all content of this blog (unless otherwise stated) is the intellectual property of Malcolm Wyatt and may only be reproduced with permission.
View all posts by writewyattuk →
This entry was posted in Books Films, TV & Radio, Music and tagged ACM Gospel Choir, Cambridge, Clean Bandit, Grace Chatto, I Miss You, Jack Patterson, Jess Glynne, Kirsten Joy, Love Ssega, Luke Patterson, Manchester, New Eyes, Rather Be, Rockabye, Starley, Stephanie Benedetti, The Voice, Yasmin Green. Bookmark the permalink.