Suggs – What a King Cnut, Preston Charter Theatre (Nights at the Theatre, pt.2) 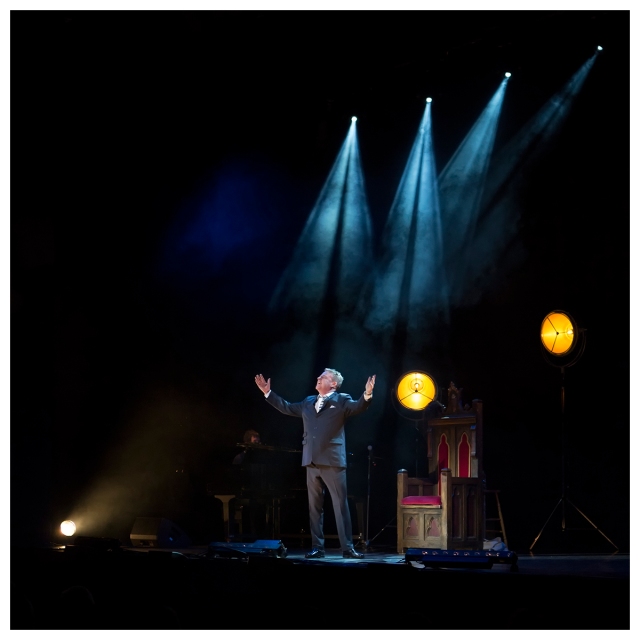 Tidal Flow: Suggs on his throne in his guise as King Cnut at Preston’s Charter Theatre (Photo: Lynda McIntyre)

Fast forward four nights and I’m closer to home at the Charter Theatre (‘We were so close it was scary, we were that close I couldn’t tell you’). Regarding the venue, in this case we’re barely talking a 45-year history, yet while the adjoining Guild Hall is fairly soulless, there’s a nice feel about the Charter, and it seems the whole building – saved from the chop by Simon Rigby – is back on its uppers, as suggested by some of the events I’ve covered on these pages in recent years from those two venues and its LiVe area (I’ll draw a VeiL over that branding).

As for that night’s two-part act, here was someone integral to the soundtrack of my life since the first Madness album, One Step Beyond, hit the racks in late 1979, eight days before my 12th birthday, the members of the band acting like they were probably the same age around then. I guess I matured with them, the Nutty Boys proving to be far more than a great singles band who staged sharp videos by the time they were making albums like Keep Moving and Mad Not Mad. Unfortunately, as the LPs got more serious and more appreciated by the likes of me, the public paid less interest. But while they briefly went away, they returned on the same fine form with the mighty Wonderful and The Liberty of Norton Folgate, and continue to belt out great records to this day, between occasional reunion shows.

Yet while the records suggest maturity, an hour and a half or so in Suggs’ company makes you realise the front-man’s as much a ball of frantic energy now as he was back in the early days – from the moment he’s trying to turn back the tide as his alter-ego King Cnut at the start of this entertaining show. Unfortunately I missed his initial My Life Story shows, but part of that format is here, an autobiographical stroll down the life of Graham McPherson which keeps you engaged from the off. Furthermore, the fantastic Julien Temple has recently made a film of the original show, which I’m very much keen to catch soon.

Ably assisted by his mate Deano on piano and occasional dialogue, there was a feeling that some of this was fairly unrehearsed, but that made it all the more interesting, Suggs sauntering through tales of early petty thievery, unorthodox apprenticeships and how Madness saved his bacon, right through to the 2012 Olympics closing ceremony and the Queen’s diamond jubilee. And en route we got his appreciation of Brian May, awaydays with Chelsea FC (and how he was looking forward to playing his FA Cup final song in Leeds on this tour), his embarrassment (‘A living endorsement’) at a This is Your Life starring role, family secrets, and much more. Meanwhile, the occasional duets with Deano bring to life and set the scene of great songs from the back-catalogue like My Girl, One Better Day, House of Fun, That Close, No More Alcohol, Amy Winehouse tribute Blackbird, and Our House.

How does this differ from his last show? Apparently, ‘if the first show was about how on earth he got there, this is about the surprises that awaited him when he did, for a bloke ‘constantly expecting that inevitable tap on the shoulder to hear ‘what are you doing here, Sunshine?’ How has he managed to get away with it for so long?’ Fame is a tightrope and Suggs has fallen off many times.’

Some Product: I kind of like the fact that Suggs signed my copy of That Close upside down (Photo: Malcolm Wyatt)

That becomes apparent as Suggs takes you through his past, starting in Glastonbury and ending on the roof of Buckingham Palace, in a show evocative enough to have you think you’re sharing a couple of pints with him or pounding the streets of Camden and Soho, popping in at the Colony Club and sneaking into the Groucho. There’s nothing false about the chumminess either, and he’s big enough to send himself up, riding the punches as characters around him pronounce him ‘a bit of a nob’ or ‘a King Cnut’.

Besides, there’s a warmth here that suggests for his occasional wrong turns in life, here’s a top bloke and a lot sharper and more intelligent than he’d like to admit. But you only have to read his lyrics, wallow in his autobiography, That Close, or its predecessor, Suggs and the City – his love letter to London – to get that. As the performance continues, you get an affinity for the real Suggs and how Madness more or less became his family, a little of the sadness in his life, his deep appreciation of his Mum and enduring love for wife Anne (aka Bette Bright) and his daughters too, all having saved him from the abyss many times these last however-many years.

As it was, my mate Paul, along for the occasion, has more affinity for the post-gig stage-door queuing malarkey than me, so we chatted for a while until most of the hangers-on drifted away. We were pretty sure he wasn’t going to show, but just happened to pass the side-exit as our star attraction made a dash for his transport, a small clique giving chase, us in their wake, getting to a dark, dingy and puddle-strewn car park just in time to have a quick word. ”Where’s next?” I asked awkwardly as a knackered and ready-to-be-gone Suggs signed my copy of That Close. “I haven’t got a fucking clue,” he cheerfully replied.

He stuck around a while though, dutifully smiling for a few selfies before speeding off (to Northampton, it turned out). I came away that night reappraising a bloke I always admired, seeing him in an alternative but similarly-positive light. And as with David Baddiel a few nights before, here’s a fella I felt closer to by the end of the evening. In fact, you could say, ‘We were that close’.

For further dates and ticket details for Suggs’ What a King Cnut tour, head here.

To cast your eyes over an appreciation of Madness on this site from five years earlier – in January 2013, just after the release of Oui Oui Si Si Ja Ja Da Da – head here.

A freelance writer and family man being swept along on a wave of advanced technology, but somehow clinging on to reality. It's only a matter of time ... A highly-motivated scribbler with a background in journalism, business and life itself. Away from the features, interviews and reviews you see here, I tackle novels, short stories, copywriting, ghost-writing, plus TV, radio and film scripts for adults and children. I'm also available for assignments and write/research for magazines, newspapers, press releases and webpages on a vast range of subjects. You can also follow me on Facebook via https://www.facebook.com/writewyattuk/ and on Twitter via @writewyattuk. Legally speaking, all content of this blog (unless otherwise stated) is the intellectual property of Malcolm Wyatt and may only be reproduced with permission.
View all posts by writewyattuk →
This entry was posted in Books Films, TV & Radio, Comedy & Theatre, Football, Music and tagged Brian May, Camden, Chelsea, David Baddiel, London, Madness, Preston, Preston Charter Theatre, Soho, Suggs, Suggs and the City, That Close, What a King Cnut. Bookmark the permalink.

3 Responses to Suggs – What a King Cnut, Preston Charter Theatre (Nights at the Theatre, pt.2)