There was a rather understated vibe as Craig and Charlie Reid first took to the stage on Sunday night alongside their bandmates in Sheffield. But with The Proclaimers it’s always been about the songs first and foremost.

I’m not sure if they still get nervous – nerves are a good thing in these situations anyway – but while Charlie can at least partially hide behind his acoustic guitar, Craig looked more unsettled initally, no smile to break the ice, just that ‘head held high’ stance, launching straight into new LP title track, ‘Angry Cyclist’.

It’s a cast-iron opener (made from girders, perhaps), packing a mighty punch, perfectly illustrating our 21st century woes, those opening lines biting, this era truly kissed by the aura of an angry cyclist.

I’m writing this after my cross-Pennine return from South Yorkshire, Tommy Robinson’s latest attention-seeking court appearance hogging the news, blinkered grass-roots support taking me back to the lines, “Watch bigotry advance, give ignorance a chance, with fascists we will dance by and by”. Yep, that “old prejudice hasn’t gone, new energy drives it on” observation says it all.

Yet if that opening statement illustrates current reality, our Fife-born twins offer hope, and over the following 90 minutes showed a way forward, 30-plus years on the road and the skill needed to hone their songcraft ensuring that while the early tracks still hold true, the latter say all the more with added wisdom. 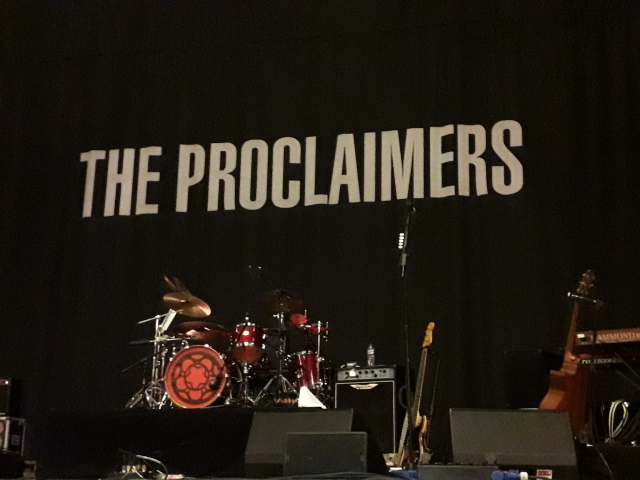 The deep timbre of Irish singer-songwriter Jack Lukeman set the ball rolling nicely at a sold-out City Hall, a grand venue where an appreciative Yorkshire crowd helped bring the best out of their cross-border raiders. And at a time when divisional talk of lines in the sand and exclusion seem to be the norm, it’s important to stress that The Proclaimers are about no such thing, seeing their own support of independence in their homeland as about ‘joining a more civilised world on our own terms’ rather than breaking away.

As Charlie put it to me in early August, ‘I’m not really big on flags. It was never about that for me. It was about democracy, and is still about democracy, and I would hope it’s more about getting a more modern country.’ And on the night, his twin Craig told us, “I am what I am,” heart on sleeve as he launched into a statement from 2015’s Let’s Hear it For the Dogs, the Reid brothers’ manifesto further expanded before our first sing-along, those glorious duelling vocals truly warmed up – the early nervousness seemingly gone – as we headed into ‘Over and Done With’ and ‘Letter From America’.

Those two songs and many more were introduced to a new generation of fans via the feelgood splendour of the Sunshine on Leith film, and brought plenty of smiles on the night, my daughter – now studying in Sheffield – among them, part of a new generation duly inspired by timeless songs written before she was born. It’s been 31 years since I first heard the band live for the first time at Glastonbury Festival, and on vinyl via This is the Story, and they remain as powerful today, the Reids having grown into their faces and yet, like their second number, ‘Forever Young’.

With the film and stage musical concentrating on the first two albums, it’s easy to bypass the rest of a bulging song catalogue, but many a case was made for filling in gaps in the collection at the City Hall, not least through airing the band airing ‘Should Have Been Loved’ from 2003’s Born Innocent, before we returned to today and the boys’ latest love letter to their home city, ‘Streets of Edinburgh’. And this is no rose-tinted portrait, but one conveying ‘an air of sordid passion’ and ‘a look of dirty grace’, our tour guides still living there rather than reminiscing from affair, where ‘along these broken pavements I let my mind run free’.

With solid support from the Reids’ regular band – Stevie Christie (keyboards), Clive Jenner (drums), Garry John Kane (bass) and Zac Ware (electric guitar, pedal steel, mandolin) – we were back to more familiar ground for the majority on next number ‘Let’s Get Married’. And while it’s another original, I like to think there’s a 1994 nod to Al Green’s proposal 21 years earlier, the siblings’ great blend of soul, country and post-punk passion bubbling up beneath the surface.

Another Angry Cyclist highlight, ‘A Way with Words’, and 2012’s ‘Spinning Around in the Air’ also show the songcraft and showcase wondrously-intuitive harmonies, those masterly touches of creative introspection followed by a withering take on denominational division in 2015’s ‘What School?’

‘Sometimes it’s the Fools’ offers a new inspirational high, not least its resolve that “the thing to do, just for its own sakes, is to build a world that’s much less rotten, ‘cos in good time we’re all forgotten”. And after the bitter love song approach is neatly nailed on 2003’s ‘Hate My Love’ and ‘94’s ’What Makes You Cry?’ I’m transported back to 1987 again with the glorious ‘Sky Takes the Soul’ before ‘A Long, Long, Long Time Ago’, somehow more than a quarter-century old in its own right, but still so fresh.

Of course, they could easily close each show with the amazing ‘Sunshine on Leith’, a true classic of our times, but instead moved on to the celebratory title track of 2007’s Life With You, a renewal of vows as it were, while ‘Rainbow and Happy Regrets’ is another powerful ditty, somewhat anthemic, like a James Bond theme that got away. Maybe we need Sean Connery out of retirement for Sunshine on Leith II. Working title From Rosyth with Love, anyone?

You could take a (Forth) bridge back from that to first encore ‘Cap in Hand’, admiring the band’s afore-mentioned maturity over the years as you go. But before we got to the latter, we had three more crowd-pleasing moments, ‘I’m on My Way’, ‘I Met You’ and ‘I’m Gonna Be (500 Miles)’, to bring this impressive house down. And as the line goes on the night’s finale, ‘I never seem to notice time’ when The Proclaimers are about, Sheffield singing along loud and clear as ‘Make My Heart Fly’ was followed by ‘Joyful Kilmarnock Blues’, the band sending us home on a high, the best view of all still where the land meets the sky.

For this site’s August 2018 feature/interview with Charlie Reid, head here.

A freelance writer and family man being swept along on a wave of advanced technology, but somehow clinging on to reality. It's only a matter of time ... A highly-motivated scribbler with a background in journalism, business and life itself. Away from the features, interviews and reviews you see here, I tackle novels, short stories, copywriting, ghost-writing, plus TV, radio and film scripts for adults and children. I'm also available for assignments and write/research for magazines, newspapers, press releases and webpages on a vast range of subjects. You can also follow me on Facebook via https://www.facebook.com/writewyattuk/ and on Twitter via @writewyattuk. Legally speaking, all content of this blog (unless otherwise stated) is the intellectual property of Malcolm Wyatt and may only be reproduced with permission.
View all posts by writewyattuk →
This entry was posted in Books Films, TV & Radio, Comedy & Theatre, Music and tagged Angry Cyclist, Charlie Reid, City Hall, Craig Reid, et’s Hear it For the Dogs, Fife, Jack Lukeman, Scotland, Sheffield, Sunshine on Leith, The Proclaimers, This is the Story. Bookmark the permalink.