Three’s Company: The Wilko Johnson Band, still keen to Blow Your Mind all these years on.

Some 15 months after my last visit to the Parr Hall, and 25 years after a brief stint working in this North West town, I was back in Warrington for a night of quality musicianship and maximum R&B.

Last time around, for The Undertones (with my review here), the floor was jumping, so it was a little odd to find the seats out and our tickets reading ‘stalls’. But as it turned out there was a solution at hand.

I felt uneasy at first, having arrived later than I hoped, struggling to find a parking space on a busy Friday night after battling down the M6 and A49. And when you need to find a designated seat in the middle of a darkened hall and the support’s already playing, it takes all your concentration skills to keep your head down (not least when you’re 6ft 4ins) and your Guinness off neighbouring punters.

And you can add to that the awkward complication that the fella with the acoustic guitar on stage is one of your songwriting heroes, recent WriteWyattUK interviewee Glenn Tilbrook, who first appeared on a bill with Wilko when Squeeze supported Dr Feelgood in 1975 and who has since supplied a fair bit of the soundtrack of my life.

I was unsure how far into his set he was, but as we found row H and sat down he treated us to the sublime ‘Up the Junction’, taking one round of applause for his efforts then asking for another for absent co-writer Chris Difford.

This was no karaoke show or Squeeze on 45 set though, but a swift journey down the years of great songs expertly played, Glenn treating us to Sandie Shaw’s ‘(There’s) Always Something There To Remind Me’ before another of his hits of yore, ‘Is That Love? And few opening lines can compete with ‘You’ve left my ring by the soap, now is that love?’

Second-guessing Glenn would be some task, and he soon swapped acoustic for electric for a little Peter Green-era Fleetwood Mac on end-of-the ‘60s blues classic, ‘Oh Well’. And where from there? Well, 1987’s ‘Hourglass’ actually, a song that made me realise I never stood a chance of lead vocal duties, tripping up over that rapid chorus time and again while trading lines amid giggles.

‘I Hear You Knocking’ was next, a little turn-of-the ‘70s rock’n’roll from Dave Edmunds delivered so well, followed by another glorious segue into Difford & Tilbrook songbook territory for melancholic masterpiece ‘Letting Go’, three weeks after I told the artiste how much I love 1991’s Play.

Solo Stint: Glenn Tilbrook, still out on the road, and playing a blinder as support to Wilko Johnson.

I got the feeling Glenn went out of his way to reach the blues in his set, but he didn’t have to dig too deep. It’s just below the surface, this consummate performer steeped in all he’s infused and taken on board, so technically accomplished it’s intuitive.

A confessional followed, Wilko’s special guest coughing up to past misdemeanours with ‘0-60 in 3 Seconds’. I’d rather let him tell you the story behind that, and you can find it on a new EP, proceeds going to the Trussell Trust, the charity both headliner and support are backing on this tour.

Time was always going to be against him, and while I dearly hoped there might be a later cameo with the main act, it seems Glenn’s emperor-sized campervan had left long before I reached the exit.

But playing to the crowd amid vociferous requests for ‘Voodoo Chile’, the wondrous ‘Tempted’ and ‘Black Coffee in Bed’ were followed by snatches of Hendrix at the start and end of further early ‘80s hit ‘Labelled with Love’ to finish. What a repertoire, what a performer.

Talking of guitar legends, two more followed shortly, R&B survivors (in more ways than one) past WriteWyattUK interviewees Wilko Johnson and Norman Watt-Roy joined by the son of another, Yes’ Steve Howe’s Dylan on drums, another who saw service with Ian Dury and the Blockheads.

I still found the sit-down setting a little constricting, and there’s nothing like a couple of old souls (Wilko and Norm aged 71 and 68 respectively) to make you realise youth is wasted on the young and middle-aged, their youthful energy intoxicating and contagious.

Wilko prowled from the start, those eyes seeking us out and that flex on his distinctive black and red Telecaster given plenty of stretch, while Norman’s strolling digits hardly let up all night, his facial expressions a picture.

From opener ‘I Love the Way You Do’ onwards, one of many fine Blow Your Mind cuts, we were in awe, and if that was the LP of new material Wilko never dreamed of being well enough to record, it was a similar story with its predecessor, where he got to share billing with Roger Daltrey on Going Back Home, its title track – written with Mick Green and originally recorded with Dr Feelgood in ‘75 –truly getting the blood pumping.

For those who know Wilko’s story, the sheer emotions in seeing him still up there are pretty overwhelming, but you get the feeling it’s mutual, this trio all about playing with passion, celebrating life itself. Never have blues been so joyful.

At that point it was a great show but missing a little something, but that changed at the eight-song mark, the band slipping into further Feelgood masterpiece, ‘Roxette’, 44 years after Old Grey Whistle Test viewers were first moved to the edge of their armchairs at the sight of Lee Brilleaux and co.

A few punters took that as a cue to make their way down the front, a show of solidarity with those that had already taken to the wings. And I loved the fact they were a right mixed bag, rhythm and blues respecting no age bar or dress code. The older guy in high street raincoat with attached hood seemed to personify that, heads down no nonsense mindless boogie (as my recent interviewee CP Lee once put it) overcoming all.

This isn’t just about out and out R&B standards – old and new – and ‘The Beautiful Madrileña’ showed glorious strength in depth before the band kicked up a gear again for another track first committed to tape in the studio in 2003, ‘Keep On Loving You’, and a nice reminder of the 2014 version with Roger Daltrey, who just happened to have turned 75 that day.

Another track from the good Doctor was next, ‘When I’m Gone’ inspiring a similar effect, the Thames Delta transported to the banks of the Mersey, as if we were seven miles from Canvey rather than Spike Island, the reverberating spirit of John Lee Hooker boom-booming away.

And if ‘Letting the Night Go By’ suggested we were nearly done, ‘Everybody’s Carrying a Gun’ led to more impassioned solos – the switch up to 12 by now – and they weren’t going anywhere until they’d headed ‘Back in the Night’ and treated us to ‘She Does it Right’, the briefest break following before they saw us to the line with a mighty ‘Bye Bye Johnny’, as much Wilko’s as Chuck Berry’s standard now.

Long may you rock, Wilko, and the same goes for Norman, Dylan and Glenn. We’re not worthy, maybe, but we’ll be here all the same. 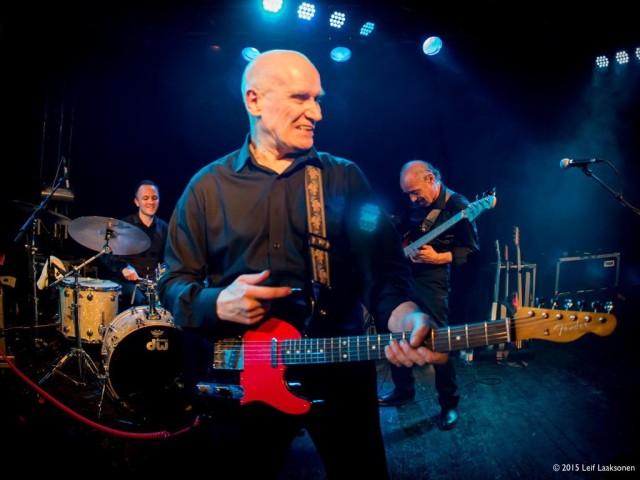 Live Wires: Dylan, Wilko and Norman giving it their all, as ever (Photo copyright: Leif Laaksonen)

A freelance writer and family man being swept along on a wave of advanced technology, but somehow clinging on to reality. It's only a matter of time ... A highly-motivated scribbler with a background in journalism, business and life itself. Away from the features, interviews and reviews you see here, I tackle novels, short stories, copywriting, ghost-writing, plus TV, radio and film scripts for adults and children. I'm also available for assignments and write/research for magazines, newspapers, press releases and webpages on a vast range of subjects. You can also follow me on Facebook via https://www.facebook.com/writewyattuk/ and on Twitter via @writewyattuk. Legally speaking, all content of this blog (unless otherwise stated) is the intellectual property of Malcolm Wyatt and may only be reproduced with permission.
View all posts by writewyattuk →
This entry was posted in Books Films, TV & Radio, Music and tagged Chuck Berry, Dr Feelgood, Dylan Howe, Glenn Tilbrook, Norman Watt-Roy, Roger Daltrey, Solid Senders, Squeeze, Warrington, Warrington Parr Hall, Wilko Johnson. Bookmark the permalink.