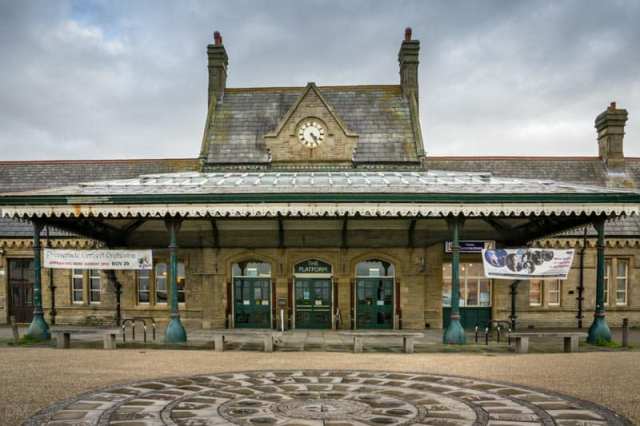 The Platform: Morecambe Promenade station has played host to a live venue since its mid-1990s closure.

There was a storm brewing in the Irish Sea last Friday as we parked on the blustery prom at Morecambe and headed across the road from the Midland Hotel to The Platform.

It was the sort of night you thank your lucky stars you’re not out there in the bay, a sentiment both the headline and support acts could appreciate.

It’s a venue I’d never visited before, but I’ll certainly be back. I mean, live music and railway heritage (the Edwardian Promenade station closed to passengers in 1994, around the time the Fisherman’s Friends first sang in public) – what’s not to love?

I barely had time to start necking my Lancaster Blonde before the Sunderland Crew walked on. And that involved a lot of feet (I’d hate to pay for their rider) – this shanty collective hunting in a pack, the giveaway to their presence the rows of empty seats with jumpers on the back, saving their places for later.

If you’re heading over the causeway to atmospheric, characterful Sunderland Point and they’re coming the other way, I’d run if I was you. Not because they might have you in a fight, but because they probably known the tide tables better than most of us.

It was only a short set, but the fact that they share some of their numbers with the main act possibly gave them setlist headaches. They gave a good account of themselves though, and I’d happily catch them again, hopefully at an outdoor home gig, with pint in hand and the tide out.

There was no call for neckerchiefs and band T-shirts for our Port Isaac visitors, themselves admitting a little song thievery over the years, yet insistent on shorter, faster versions (‘FF-ing it up’, as they put it). 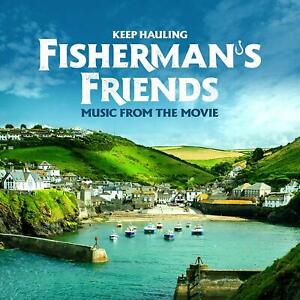 They started as a 10-piece, but lately they’ve been down to eight, and on this occasion there were six Friends – with no John B (just the boat of the same name), no Lefty, and no Billy, who that week announced he was stepping down for family reasons.

But don’t think for one moment that means they were firing on fewer cylinders. If anything, there was even more of a presence. Besides, there was a neat replacement in Pete, the only local with a starring role in the film of the same name, the others reckoning they failed the audition while his acting credentials secured his place, his voice good enough to be part of the real deal too (does that make him an able seaman?).

The instantly-recognisable Jon Cleave got them off to a trademark ‘rollocking, bollocking, saucy, bawdy, fruity, jolly-rogering’ start with a drop of ‘Nelson’s Blood’, and there was no turning back from there over two full-on sets, their 22-song salvo bringing a taste of the Atlantic Coast to this North West outpost.

I was going to call Cleavie – the moustachioed maestro with the booming bass voice on our left side – the MC, but we got as much lip from Jeremy on the opposite wing, opening his lead vocal account with ‘Stormalong John’, the first of many choices from last year’s Sole Mates.

There was plenty of input from the ‘outsiders’ too, Leeds-born Johnny Mac sneaking across the border to reprise the early days on ‘Roll the Woodpile Down’ before younger recruit Toby’s poignant ‘Leave Her Johnny, Leave Her’ and fellow Padstow lad Jason’s ‘The Mermaid’.

We also had JC’s inuendo-heavy ‘Sugar in the Hold’ before Jeremy took us to the South Seas for ‘Rolling Down to Old Maui’ then Jason and his accordion got shore leave at ‘Yarmouth Town’.

There was local-ish colour too, Toby treating us to ‘The Leaving of Liverpool’, although Cleavie was worried they’d ‘delighted, entranced and pleasured’ us too soon, ‘Sloop John B’ signalling an interval.

The queue at the bar was ominous, but you have to work at a thirst when the Friends are in town, and they were soon back – bottles of Tribute at their feet – with ‘Blow the Man Down’.

Cleavie filled in those who didn’t know the band story with a recap of how they were ‘discovered, although we didn’t even know we were lost’, and how their debut major label release became the largest-selling folk album ever (although Jeremy reckons it still only sold 25 copies).

If the band have a signature tune, I guess it’s the mighty ‘No Hopers, Jokers and Rogues’ from that record, a rousing reception following from the good folk of North Lancs before Johnny Mac introduced us to the ‘Sweet Ladies of Plymouth’.

A plug followed for the movie based on their story, something Jon C joked made a change from documentaries about in-breeding. Yet while promising a film in the feelgood traditions of The Full Monty and Calendar Girls, he stressed there’d be no nudity on this occasion.

This celebrated buoy band were on form with their harmonies all night, not least on ‘Keep Hauling’ from the film soundtrack, while ‘Billy O’Shea’ and ‘God Moves on the Water’ (about the Titanic) kept up the momentum.

The band ran their colours up the mast with a life-affirming ‘Union of Different Kinds’, their resident Yorkshireman again impressing on a hymn to old-fashioned hands across water diplomacy, rather than a call for walls and xenophobic tendencies.

A band of international appeal’s next port of call was stateside with ‘Oh You New York Girls’, then they set sail on ‘The Bonny Ship the Diamond’ whaler, with hardly a dry boat in the sea during a heartfelt finale, the Friends doing Devonian Steve Knightley (of Show of Hands fame) proud on alternative Cornish anthem ‘Cousin Jack’.

Having taken the applause and raised their glasses, there was no reason to leave the stage before the encore, a rousing JC-led ‘(What Shall We Do With) The Drunken Sailor?’ followed by Jeremy having us bound for ‘South Australia’, heaving away and hauling away for all they were worth.

It was hardly ‘Cheers and gone’ though, every man Jack and John remaining an hour or so later, chatting and signing anything that came their way with far-flung fans. And I reckon they’ll be back in these parts dreckly enough. 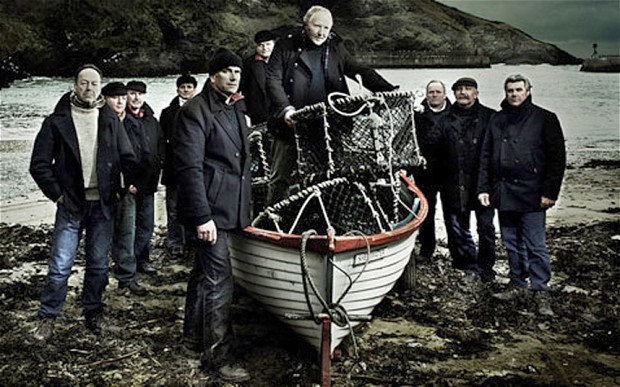 Cast Away: Fisherman’s Friends prepare to leave Port Isaac and head up around Wales, bound for Morecambe Bay

A freelance writer and family man being swept along on a wave of advanced technology, but somehow clinging on to reality. It's only a matter of time ... A highly-motivated scribbler with a background in journalism, business and life itself. Away from the features, interviews and reviews you see here, I tackle novels, short stories, copywriting, ghost-writing, plus TV, radio and film scripts for adults and children. I'm also available for assignments and write/research for magazines, newspapers, press releases and webpages on a vast range of subjects. You can also follow me on Facebook via https://www.facebook.com/writewyattuk/ and on Twitter via @writewyattuk. Legally speaking, all content of this blog (unless otherwise stated) is the intellectual property of Malcolm Wyatt and may only be reproduced with permission.
View all posts by writewyattuk →
This entry was posted in Books Films, TV & Radio, Music and tagged Cornwall, Cousin Jack, Fisherman's Friends, Jeremy Brown, Jon Cleave, Morecambe, Padstow, Port Isaac, Show of Hands, Steve Knightley, Sunderland Crew, Sunderland Point, The Platform. Bookmark the permalink.