The Undertones / The Neville Staple Band – The Ritz, Manchester 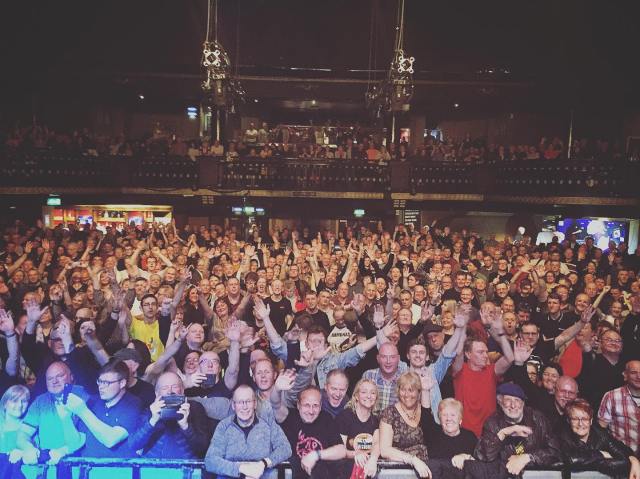 Ritz Cracker: The view from the stage at the Ritz, Manchester, as snapped by the singing one (Photo: Paul McLoone)

An early start caught me out, my train arriving after seven, The Neville Staple Band already in charge by the time I’d made it from nearby Oxford Road station. And to channel ska inspiration Prince Buster and fellow 1979 breakthroughs Madness, even if I kept on running, I’d never have crossed Whitworth Street West in time.

By the time I’d wandered through the foyer into the main hall – stopping only to shake hands with Mickey Bradley – this dynamic octet (Mr and Mrs Staple accompanied by bass, guitar, drums, keyboards and two-man brass) had already revisited May ’79 debut Special AKA single ‘Gangsters’ and The Slickers’ ‘Johnny Too Bad’, and were part-way through ’Monkey Man’, Nev’s missus Sugary’s smile infectious as she gave us the knees-up treatment on a Toots Hibbert number as good as adopted by her hubby after all these years.

Next was a splendid take on Bananarama and Fun Boy Three adapted ‘60s soul staple (so to speak) ‘Really Saying Something’, Sugary out front, then the mighty ‘A Message to You Rudy’, Dandy Livingstone’s dancefloor smash hitting the spot. And another Specials’ debut LP highlight, Rufus Thomas’ ‘Do the Dog’, kept the place moving. Yep, the Spirit of ’79 was truly captured, the line drawn in the sand for tonight’s headliners.

Another Fun Boy Three excursion followed, ‘The Lunatics Have Taken Over the Asylum’ increasingly apt given the current UK and US political climate. Then, after a plug for the band’s charity rewrite of ‘Rudy’, ‘Put Away Your Knives’, Sugary led on a ska-licious ‘Rude Girl’, her other half toasting at her side.

The jukebox kept cranking out hits, The Pioneers’ Long Shot Kick the Bucket’ showcasing late ‘60s Trojan gold and the roots of the ska revival a decade later, while a multi-speed take on Symarip’s ‘Skinhead Moonstomp’ from even earlier kept the groove going, the joint jumping.

Time was always going to be against this accomplished band, but an extended ‘Ghost Town’ took us all back to a place and time, the musicianship never in doubt, the brass supreme. Alas, there’s only so much you can shoehorn into a support slot, and – individual introductions done – we got a further delve back with Lynval Golding’s ‘Do Nothing’, more a celebration on this occasion, before a glorious closing run through The Skatalites’ version of ‘Guns of Navarone’.

All Together: The Undertones and The Neville Staple Band join forces, the Spirit of ’79 well and truly intact.

Few will have left the Ritz not wishing to catch Nev and his band again sometime soon. Satisfaction guaranteed. And it was a perfect bill – a punky-reggae party of sorts, both sets of fans with ears wide open and hearts responding. A later show of hands from the headliners suggested several punters hadn’t seen them before, and that worked the other way too. New fans won over by each set.

I’m not sure whether I could fail to be cheered by the sight of The Undertones either, and this proved another perfect venue to catch Derry’s finest. What’s more, 38 years after my Positive Touch debut, 36 years after my final sightings of the Feargal Sharkey-fronted band , and 19 years after first clapping eyes on the refurbished Paul McLoone-led five-piece at the Mean Fiddler, the revival party continues apace. And as John O’Neill recently put it, they’re, ‘definitely getting better. I don’t know how or why’.

That wasn’t in doubt as they took to the Ritz stage with an introductory treble from their eponymous first LP, released 40 years ago that week, ‘Family Entertainment’, ‘I Gotta Getta’ and ‘Jump Boys’ ensuring the sprung dancefloor was properly utilised from the off, old-time punk and new wave values writ large.

While they had every right to turn this into a show solely about celebrating ‘the greatest record of all time’ (© Neil Waite, Rocking Humdingers Club), this was never an outfit to sit back and crow on past achievements, and 1981’s ‘It’s Going To Happen’ sounded fresher than ever … even if I’d have loved to hear Neville’s brass duo let loose on that middle section.

Similarly, the gorgeous ‘Tearproof’ never falls short of the mark, while 2009’s ‘I’m Recommending Me’ gets better with every outing, now fully appreciated by the faithful, one of several Mk. II classics penned by Mickey (‘using a really nice crayon’ , as he put it).

The better-known songs always go down a treat of course, and ‘Jimmy Jimmy’ was afforded a rousing crowd singalong. And this being weekend Manchester on the eve of the Premier League season finale, ‘When Saturday Comes’ was inevitable, Mickey doing his bit for diplomacy with a shout-out for local heroes Bury FC.

‘Girls That Don’t Talk’ from 1980 was next, Dee and John’s guitars still tugging this boy’s heartstrings all these years on. Also inevitable was the tribute to Pete Shelley, Paul dedicating mighty comeback single ‘Thrill Me’ to his memory, recalling the band’s chat with him in Sunderland last summer.

‘Love Parade’ is another song reborn in recent years, and here – as it on Damian O’Neill’s stunning Refit Revise Reprise LP – it was more as it was intended from Dee and Mickey’s Wesleys’ side-project days.

And ‘Male Model’? What can I say? Still the perfect tongue-in-cheek punk exclamation mark, the band’s enthusiasm for their own material neatly encapsulated by Mr Bradley’s ‘I love that one’ pronouncement.

Again, we felt the strength in depth of the more recent material with Monkees-esque 125-second neo-classic ‘Here Comes the Rain’, succinct and to the point, further proof that John never forgot how to craft a perfect song.

Speaking of which, you’ll have heard of ‘Teenage Kicks’, kids, that nugget preceded by the raw original version of ‘True Confessions’, as explosive today as in ‘78. And the hits kept coming, ‘Here Comes the Summer’ similarly crowd-pleasing before ‘Dig Yourself Deep’ again showed the depth of the 21st Century ‘Tones.

From the first long player we got ‘I Know a Girl’ and from the second ‘Nine Times Out of Ten’, Mickey admitting to another Buzzcocks steal on the outro, then paying tribute to fellow Manc Paul Hanley, praising his splendid Leave the Capital book, the Fall legend and current Brix & the Extricated drummer there with bass-playing brother and bandmate Steve on the night.

The last of the McLoone-era selections was 2003’s ‘Oh Please’, and who could resist those backing vocals and melodious riffs? There was still plenty of credit in the jukebox too, with two of the finest singles ever made next, ‘You Got My Number (Why Don’t You Use it?) and ‘Wednesday Week’, the latter something of a breather before ‘79’s ‘Girls Don’t Like It’, ‘(She’s a) Runaround’ and second single ‘Get Over You’ closed the main set. Every song a classic.

A 10 o’clock curfew was nearly upon us, my last train closer to departure, but they still managed to squeeze in five more glorious numbers, the encore kicking in with Doherty the drummer’s esteemed ‘Billy’s Third’, a storming ‘There Goes Norman’, the wall-to-wall fervour of final debut LP choice ‘Listening In’, and second record title track ‘Hypnotised’, another track exuding evergreen status.

And then the floor was sprung once more, our treasured quintet going out on ‘My Perfect Cousin’, penned 40 summers previously and never failing to please.

Yes, 30 songs all told, and each bringing sunshine, smiles, nostalgia and inspiration, The Undertones carrying on where Neville had started the evening, the Spirit of ’79 refitted, revised, reprised, revitalised, and revved up good and proper.

For this website’s recent interviews with The Undertones’ Damian and John O’Neill (where you’ll also find links to plenty more Undertones-themed interviews, features and reviews), and with Neville Staple, follow the links.

The Undertones and Neville Staple Band’s UK tour concludes this weekend (doors 7pm, tickets £25 advance) at Bexhill De La Warr Pavilion (Friday, May 17th, 01424 229111) and Southampton Engine Rooms (Saturday, May 18th, 0800 688 9311 ). For more details of The Undertones’ 2019 schedule, including US tour, UK and Irish festival appearances, head here, try their website and keep in touch via Facebook, Twitter and Instagram.

A freelance writer and family man being swept along on a wave of advanced technology, but somehow clinging on to reality. It's only a matter of time ... A highly-motivated scribbler with a background in journalism, business and life itself. Away from the features, interviews and reviews you see here, I tackle novels, short stories, copywriting, ghost-writing, plus TV, radio and film scripts for adults and children. I'm also available for assignments and write/research for magazines, newspapers, press releases and webpages on a vast range of subjects. You can also follow me on Facebook via https://www.facebook.com/writewyattuk/ and on Twitter via @writewyattuk. Legally speaking, all content of this blog (unless otherwise stated) is the intellectual property of Malcolm Wyatt and may only be reproduced with permission.
View all posts by writewyattuk →
This entry was posted in Music and tagged 1979, Bexhill, Billy Doherty, Buzzcocks, Damian O'Neill, Fun Boy Three, Hypnotised, John O'Neill, Manchester, Manchester Ritz, Mickey Bradley, Neville Staple, Paul Hanley, Paul McLoone, Pete Shelley, punk, ska, southampton, The Specials, The Undertones. Bookmark the permalink.

1 Response to The Undertones / The Neville Staple Band – The Ritz, Manchester