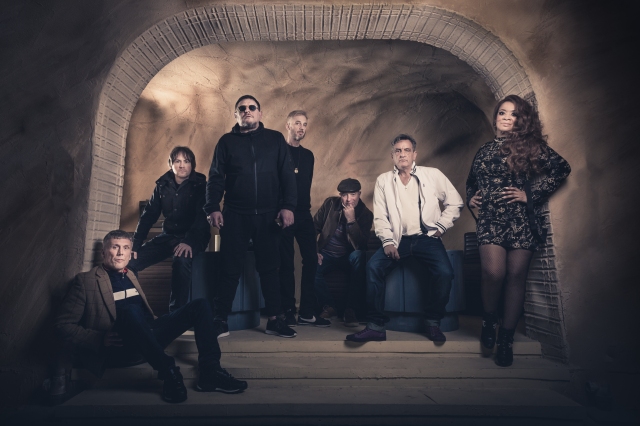 Back Again: Happy Mondays, coming to a town near you this October, November and December 2019.

Four decades after crossover indie/dance combo Happy Mondays set out on their initial adventure, and 30 years after their biggest-selling LP, the legendary Manc outfit have announced a marathon greatest hits tour for October, November and December this year. And it’s fair to say that the band’s resident freaky dancer and percussionist, Mark Berry – best known the world over as Bez – is mad for it.

It’s a big undertaking this, I put to one of music’s great characters, still twisting his melons where and when he can all these years on. I mean, 29 dates in total – is he up for that?

I spoke to Rowetta when you were touring two summers ago, and she told me that September 2015 WriteWyattUK interviewee Shaun Ryder was a different bloke since he’d become a family man. Have you mellowed too over the years?

“Well, I’m a different bloke to when I first set out. I have changed my lifestyle slightly, moving into more sustainable living. I got involved in politics for a while, and I’m a Grandad these days.” 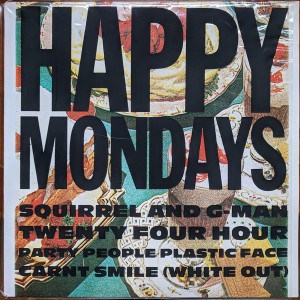 “Grandad Bez, he calls me! He’s seven, and his name’s Luca. He had to go into hospital to have an operation done on his ears, and when he woke up afterwards, he was talking to the nurses about being at Glastonbury that summer. That was on his mind at the time for some reason. I don’t know why. Ha ha!”

Born in Bolton and raised there and in Salford and Wigan, and at one point a next-door neighbour of his pal Shaun – the pair popping up this last week on a celebrity edition of Channel 4’s Gogglebox – in the High Peaks of Derbyshire, Bez has shifted from his North West roots of late to Herefordshire. But I guess he’s been a wandering soul for some time.

I recall him popping up in the story of Joe Strummer, among his campfire crew, part of a scene that ultimately inspired The Clash frontman’s return from his wilderness years fronting the Mescaleros, the pair among those roaming the great outdoors of Hampshire before Joe moved to Somerset. Happy days, Bez?

“They were great days, and I’m lucky to live in an area where we’ve not spoiled the countryside now.”

I think he was alluding there to light pollution and a superior night sky somewhat removed from his old Greater Manchester haunts, ideal for stargazing and evening campfires. But you can’t have it all, and his mobile reception wasn’t so great, Bez drifting in and out as we spoke. So home is no longer Urmston then?

“No, I’m near Hereford these days. It’s a beautiful area and I really enjoy living there, but I’m back and forth all the time to see family and everything else in Manchester.”

It was a big shock losing Joe Strummer when we did, in December 2002.

“Yeah, and he died so young. But all the campfire kids are really good friends to this day, and Joe left us some great music behind.”

Talking of friends in the music business, I was talking to Carl Hunter from The Farm the other day about his first film as a director, the splendid Sometimes Always Never, and he put the 2004 reformation of his band squarely at the door of the Mondays, inviting them to get back together as a support act on a tour that year.

“Yeah, we always had a good relationship with The Farm. They’re from a similar background to ourselves, and we enjoy their company.”

He mentioned politics, and not only did that involve standing for Parliament – in Salford and Eccles for the 2015 General Election, independently on behalf of the Realist Party on a platform of ‘free energy, free food and free anything’, winning 703 votes, 1.6%, in a seat won by Labour’s Rebecca Long-Bailey with 50% of the vote – but also continued protest against shale gas fracking. In fact, four and a half years ago he was a media presence on site, at the forefront of the battle, on-site as well as joining fellow activists outside Lancashire County Hall in Preston, opposing proposed tests.

He told reporters at the time, ‘The welfare of the people don’t come into question. What comes into question is profits – that’s all they care about. They haven’t any interest at all in any sort of welfare or the being of this planet or even care for the planet itself.’

The story’s not on the front of the newspapers right now, but I get the impression you still want people to remain vigilant.

“I believe they’re planning on resuming drilling in West Lancashire at Preston New Road. We’ve done everything we can so far to stop them and they’ve lost every battle as we try to uphold our rights to freedom of protest. We’ve fought court battles to ensure rules aren’t changed. I don’t know where they’re getting their money from. Any other company who’d lost that much money would have left. But they’re still there, still going, with plenty of corporate backing, and my fear is that they’re now waiting for a Brit exit and then a new deal with America. We’ve got no idea what that deal’s about, and when it’s implemented it will remain secret for years. I think that’s what these fracking companies are waiting for. But it’s not over yet. They’re intent on going on, but they ain’t gonna succeed!”

After signing to Tony Wilson’s Factory Records, the late ‘80s saw Happy Mondays become pioneers of the ‘Madchester’ sound, blending their love of funk, rock, psychedelia and house music with the sounds of the UK’s emerging rave scene. It was the third LP, 1990’s platinum-selling Pills ‘n’ Thrills And Bellyaches, that saw the Mondays cross over into the mainstream, and a quarter of a century later they won the Ivor Novello’s Inspiration Award in 2016, helping cement their reputation.

However you might class part-time beekeeper and beer brewer Bez’s creative input for Happy Mondays over the years and Black Grape in the past, he’s certainly been a key factor in both bands’ appeal, and has hardly been shy in front of the cameras over the years. And while there have been a lot of questionable choices and actions down the years, including a short custodial sentence and bankruptcies along the way, his popularity has hardly waned, as seen in a 2005 Celebrity Big Brother public vote victory. And then there was last September’s celeb Bargain Hunt victory on the BBC alongside Rowetta over Pulp’s Jarvis Cocker and Candida Doyle, until subsequent disqualification after it emerged that his girlfriend bought two of the items at the auction, Bez paying their £8 profit to Comic Relief out of his own pocket.

It’s been a rollercoaster ride. Ever think for one moment when you joined the Mondays that you might still be out there on our TV screens and playing live, treating us all to your freaky dancing, shaking your maracas – so to speak – and living the life of a music star at the age of 55?

“No, it’s absolutely incredible. If you’d told us when we were young kids, when we first set about in the business, when we were struggling musicians, that we’d still be out there after 35 years, it would have been like an impossible dream. How fortunate we’ve been to pursue a career doing something that you absolutely love doing. Not many people get that opportunity in life, with the lifestyle that goes with it.”

Not just one successful band either, but Black Grape back in the day too, amassing six top-10s and 13 top-40 hits between those bands, even scoring a 1995 No.1 with the latter’s It’s Great When You’re Straight … Yeah album.

“Yeah, the sad thing with Black Grape is that (first) album would have been the next Happy Mondays album. Kermit actually sang on the last Happy Mondays album, and that was like the stepping stone in the direction we were moving into. It’s such a shame that we all fell out. I think we would have all gone on to greater success. But we went on with Black Grape, and that’s one of the biggest selling albums we ever produced.”

And going back to your recording roots, have you still got your copies of Happy Mondays’ hard to find 1985 Factory singles – the ‘Forty Five’ EP and ‘Freaky Dancin’’ singles?

“No. At the time I used to give everything away. But I still see them knocking about. People still bring them out and I sign them. And I always look at them and say, ‘Ooh, I wish I had that record!’”

I’d run out of time by then, but still managed a couple of quick-fire questions. Does he still get around in his black cab?

“No, the black cab got stolen. You can’t have anything these days unless it’s tied down.”

What did you make of Chris Cogshill’s portrayal of yourself in the 24 Hour Party People film? 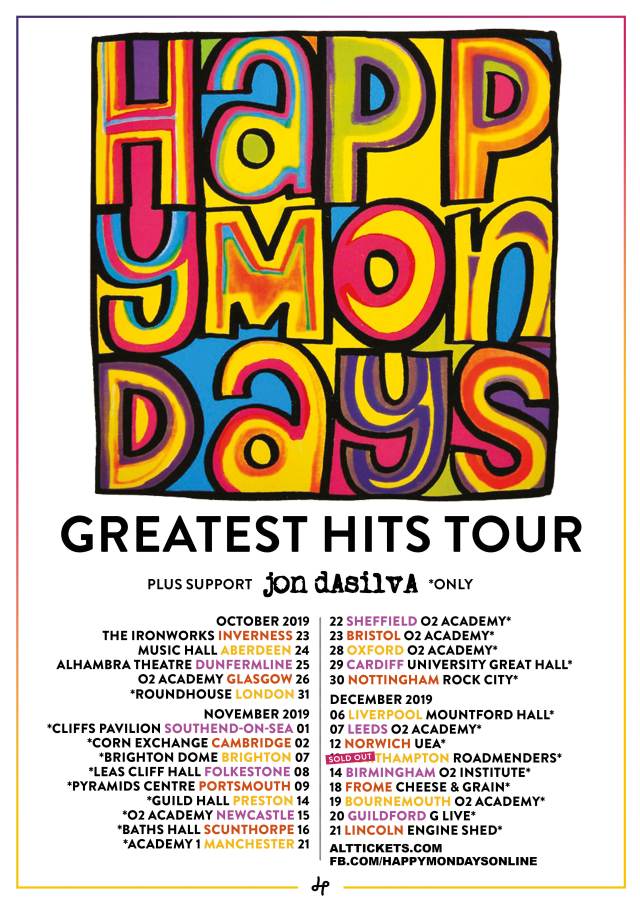 “I’m actually gutted because he’s taller than me, more handsome than me, and does me better than I do myself!”

Finally, if you could go back 40 years and take aside your 15-year-old self, what advice would you offer him?

“Well, when I was that age, I wasn’t very good at taking any advice. I suppose if I was able to go back again I’d be in that same sort of position where I wouldn’t really listen to any advice. But that’s what’s life’s all about. It’s all about experience, whether it’s good or bad. That’s what you live for.”

Maracas Master: Mark Berry, the artist best known as Bez, still mad for it all these years on. (Photo: Paul Dixon)

A freelance writer and family man being swept along on a wave of advanced technology, but somehow clinging on to reality. It's only a matter of time ... A highly-motivated scribbler with a background in journalism, business and life itself. Away from the features, interviews and reviews you see here, I tackle novels, short stories, copywriting, ghost-writing, plus TV, radio and film scripts for adults and children. I'm also available for assignments and write/research for magazines, newspapers, press releases and webpages on a vast range of subjects. You can also follow me on Facebook via https://www.facebook.com/writewyattuk/ and on Twitter via @writewyattuk. Legally speaking, all content of this blog (unless otherwise stated) is the intellectual property of Malcolm Wyatt and may only be reproduced with permission.
View all posts by writewyattuk →
This entry was posted in Books Films, TV & Radio, Music and tagged 24 Hour Party People, Bez, Black Grape, Carl Hunter, Chris Cogshill, Factory Records, fracking, Herefordshire, Joe Strummer, Kermit, Madchester, Manchester, Manchester Academy, Mark Berry, Pills 'n' Thrills And Bellyaches, Rowetta, Shaun Ryder, The Farm, The Roundhouse. Bookmark the permalink.