My fifth visit to Whitworth Street West in 2019 and a second in five nights, with the clientele far younger under the Oxford Road railway arches this time. But in a similar manner to punk legends Buzzcocks on Sunday, all three acts on Thursday also had the place moving.

Heavy traffic between the M61 and M60 ruled out two-thirds of the first set for this punter and daughter, but Oscar Lang and his band went down a storm judging by the last two songs, the spirit of the season strong as they gave us the heart, cockle and yule log-warming ‘Christmas is Home’, us wishing we’d caught the rest of the set.

It could be the slowest-burning festive No.1 hit of all time, making its Soundcloud debut last year and now, properly recorded, still to crack the charts. It’s only a matter of time though. By Oscar’s admission, it carries ‘full-on cheesy, ‘80s Christmas song vibes’, but certainly hits the spot. Watch this festive space, or at least catch it on Spotify then shell out, get his royalties flooding in.

In an NME interview, he reckoned his synthpop-heavy but chilled indie sound mixes elements of Mac DeMarco (lost me there), John Lennon (I get that, yet hear Julian Lennon more) and Tame Impala’s Kevin Parker (fair enough).

Oscar’s certainly been busy since signing to Dirty Hit, his Silk LP – Beabadoobee guesting on one track – and mini-LP Teenage Hurt and To Whom it May Concern and Bops, etc. EPs making an impact, the latter including an obvious choice for set-closer here, the super-chirpy, especially-catchy ‘Hey!’, the crowd reaction suggesting a whole lotta love for this London five-piece in the snowflake-white tops, and too soon melting away backstage.

It was a similar tale of adulation for capital-based Filipino artist No Rome, the audience in large part intimately knowing his nine-track set, presumably picking up on him via past tour supports with The 1975 and fellow label-mates Pale Waves. Was this the biggest act out there I knew nothing about? To be fair, my shock at their reaction was comparable to his own as he held the mic. out and they sang along. There were even kids being linked in at home via FaceTime. Sign of the times, eh.

Pop Royalty: No Rome led the crowd a dance at Gorilla in Manchester (Photo: Ianthe Warlow & One Great Song)

With 2018’s RIP Indo Hisashi and this year’s Crying in the Prettiest Places Eps behind him, he appears to be brimming with confidence, a natural performer switching regularly between guitar, keyboard and vocal walkabouts, finishing with The 1975 co-write, ‘Narcissist’. Too reminiscent of Drake-like mellow pop for these ears, but who am I to judge? No Rome is potential pop royalty on this evidence, the warmth between performer, audience and back again truly something. And remember, when he does make it big, you heard it here last.

That was the thing about this evening – that enveloping love for all three acts, not least the collective spirit between the bands themselves, who when not on stage were often spotted peering down from the room above, partying along with their label-mates.

This was night 19 of 20 – starting in Cambridge in late November and with just one more sell-out to come at The Dome, Tufnell Park, handy for the label’s West London base – and they still got on, the second Dirty Hit three-act tour – following Superfood, King Nun and Pale Waves in 2017 – a triumph.

There’s clearly a buzz about this label, which had just marked its 10th anniversary, its eclectic roster – also including WriteWyattUK favourites Wolf Alice – really going places. And for me, the brightest star was still to come, Beatrice Kristi Laus – aka Beabadoobee – personifying post-teen spirit and expertly straddling that line between grunge and indie-pop.

Doing my homework over previous weeks to get to know her catalogue, I wondered how she’d sound live. And as it turned out, I was duly impressed, the recorded versions given extra bite. her live show defintely at the grungier end of the spectrum. My sole niggle was that her gorgeous vocal was a little lost in the mix beneath her guitar work, but I wouldn’t be surprised if that’s how she likes it – hiding her light under a bushel, so to speak.

Besides, that modesty does her justice, this frontwoman with a difference seemingly happier snuck to one side of the stage, just one key component of a dynamic three-piece. It wasn’t a classic three-piece though – there’s a holistic fourth member, pre-recorded parts giving this Brit Rising Star 2020 nominee a freedom of movement so she can just let loose with her six-string, her rhythm section pitching in perfectly.

KickStart: Beatrice Kristi Laus, aka Beabadoobee, has true star quality, both live and in the recording studio

From the start the more Dodie-like dreamy nature of her early recordings was cast aside, launching straight into ‘Are You Sure?’ and barely holding back from there. Don’t get me wrong, there’s plenty of room for the acoustic side of her songcraft. But this made for a more full-on live experience.

I told Kristi during our interview I could hear snatches of The Cardigans, The Sundays and Suzanne Vega in her work, and having now caught her live I can add the likes of The Breeders, and maybe Lush and Sleeper at their more raucous.

Kristi’s had a busy 2019 too, releasing a selection of mini-LPs and EPs, and touring the US in support of Clairo, and her live presence appears to be growing accordingly. Yet there was no sign of complacency, the artist more about grim determination at times, only briefly giving us that winning smile, with none of the easy-going between-song banter we experienced earlier on.

In a sense, she seems to have outgrown ‘Coffee’, the track that signalled her arrival, a remnant of a long-ago phase (albeit barely two years back) in her career. It went down a storm, a mass sing-song ensuing, and she delivered it perfectly, but it might have fitted better at the top end of the encore she never had time to claim.

She seems more at home on harder, faster numbers like ‘I Wish I Was Stephen Malkmus’, ‘If You Want To’, ‘Disappear’ and ‘Space Cadet’ though, the crowd surging and moshing to their hearts’ content, with more laidback tracks like ‘Apple Cider’ and ‘Ceilings’ taken up a notch, and ‘Angel’ ramped up a little more.

Our Queen Bea ended in top gear with the bass-driven ‘You Lie All The Time’ then a crowd-pleasing show-stopper paying tribute to Eliana, her left-hand woman, ‘She Plays Bass’ providing a neat ending to a cracking night that suggests the future of indie-pop might just be safe in such hands. 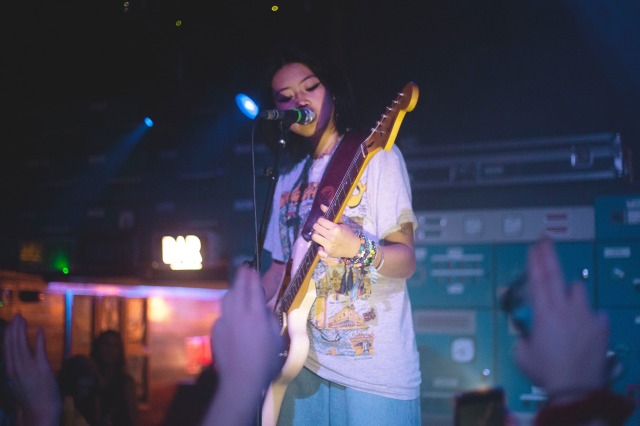 With thanks for the photographs to Ianthe Warlow and One Great Song, where you can see a parallel review and lots more photos.

A freelance writer and family man being swept along on a wave of advanced technology, but somehow clinging on to reality. It's only a matter of time ... A highly-motivated scribbler with a background in journalism, business and life itself. Away from the features, interviews and reviews you see here, I tackle novels, short stories, copywriting, ghost-writing, plus TV, radio and film scripts for adults and children. I'm also available for assignments and write/research for magazines, newspapers, press releases and webpages on a vast range of subjects. You can also follow me on Facebook via https://www.facebook.com/writewyattuk/ and on Twitter via @writewyattuk. Legally speaking, all content of this blog (unless otherwise stated) is the intellectual property of Malcolm Wyatt and may only be reproduced with permission.
View all posts by writewyattuk →
This entry was posted in Music and tagged Beabadoobee, Dirty Hit Records, Gorilla, Manchester, No Rome, Oscar Lang, Philippines, She Plays Bass. Bookmark the permalink.