Titanic voices – one hundred years on

One hundred years to the day its survivors first came ashore at New York’s Pier 54, the RMS Titanic remains a source of fascination, its stories told and re-told across the years and the generations.

My mum remembers her granny talking about the day she heard of the disaster, and six decades later my own introduction came via the battered family black and white telly, with 1958’s A Night To Remember no doubt already a small screen perennial by the time it stirred something within me. 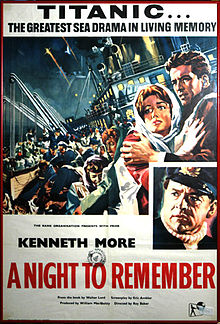 A Night to Remember – The 1958 Cinema Poster

Made nine years before I was born, and inspired by Walter Lord’s fine book of the same title, here was a harrowing story that had it all – not least action, adventure, courage, emotion and heroism. As well as Kenneth More’s lead, there was David McCallum, an actor I coveted for his (later) cool role as Illya Kuryakin in The Man from UNCLE, portraying heroic Marconi room assistant Harold Bride.

The tragic tale of the Titanic always appealed, this defining moment in history telling as much the story of the third class passengers as the opulent higher deck VIPs of the time, with its heroes and villains drawn from across the class divide.

As I grew up I became aware of a Surrey link through Jack Phillips, the over-worked chief wireless operator Bride assisted that fateful night. In A Night To Remember he was played by distinguished Welsh actor Kenneth Griffith, but in real life was born and bred just a couple of miles down the road from my old neck of the woods.

On a recent trip back, I chanced upon a low-key but fitting exhibition to Jack, the tiny rooms of Godalming Museum given over to well-researched displays and mementoes marking his telling contribution in attracting would-be rescuers, the town also boasting a poignant riverside memorial to its honourable son.

Further down the road in Southampton, there are many more tributes and echoes of this defining maritime disaster to seek out. Many of those local links are well documented in Donald Hyslop, Alastair Forsyth and Sheila Jemima’s 1994 Titanic Voices – Memories From the Fateful Journey. Again I could relate to it all, having spent many an hour as a lad watching later generations of big ships on Southampton Water and out on the Solent, as many generations of us did in all the ports associated with the White Star Line – in Belfast, Cherbourg, Cobh, Liverpool or New York.

When I left for Lancashire in the mid-1990s, it appeared that the Titanic memories followed me too. I was soon writing articles for newspapers about the character More played in 1958, Charles Herbert Lightoller, who left his native Chorley at an early age bound for Liverpool and a life at sea. You wouldn’t believe that if you took at face value the accents of More in A Night To Remember, Jonny Phillips in James Cameron’s 1997 blockbuster Titanic, or Steven Waddington in Julian Fellowes’ 2012 ITV1 mini-series of the same name. But ‘Lights’ was a Lancashire lad through and through.

You’ll have to go elsewhere to read his amazing story, and I’d recommend his own Titanic and Other Ships, and Patrick Stenson’s Titanic Voyager, boys’ own tales spanning the tall ship and US gold-rush eras right through to his distinguished war service. And I often wonder if there was an element of fate in the fact that I was drawn to this larger-than-life character long before I shared his old patch.

The links don’t stop there, and as well as the captains of the Californian and Carpathia – forever associated with the disaster for contrasting reasons – hailing from nearby Bolton, it was on a trip to see Anthony Gormley’s amazing Another Place marine sculptures at Waterloo that I chanced upon the seafront homes of Captain Edward Smith and the Ismay family that led the White Star Line, their son the chairman who survived the tragedy in such controversial circumstances.

Add to that my love of Barmouth in North Wales, which has its own Titanic hero, Harold Lowe. Fifth Officer Lowe played another dramatic part in the story, picking up survivors from the icy waters. He was memorably played by Ioan Gruffudd in Cameron’s Titanic, a cinematically-superior, far more graphic vision of the story, but one regrettably mixing fact with too much fiction – something this amazing chapter in history never really needed.

There are plenty of good accounts of the tragedy available in print, Walter Lord’s 1955 bestseller setting the benchmark, and recently followed by celebrated genealogist Nick Barratt 2009 collection Lost Voices From The Titanic for one. And back to the small screen, these past couple of weeks seemingly brought wall-to-wall documentaries and dramatisations to mark the 100thanniversary of the disaster. 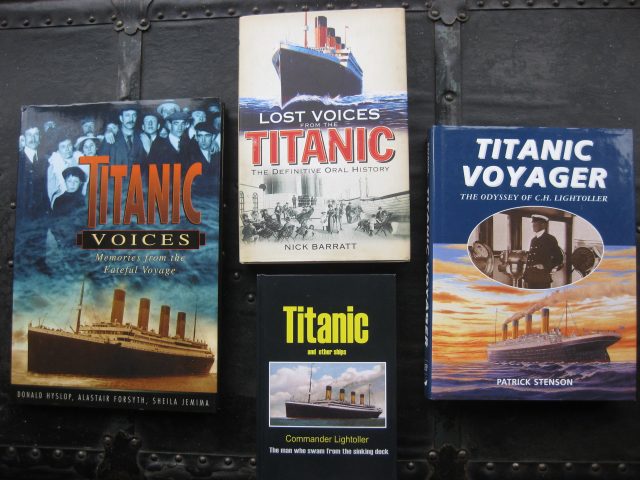 Titanic: In Print (photographed rather aptly on the trunk my better half’s great-great-grandmother used when she sailed from Liverpool to Quebec and Montreal in 1911 (returning in 1933)

Most have been good, some quirkier than others, not least Madness frontman Suggs’ portrait of the band that played that night, led by East Lancastrian Wallace Hartley. I was singularly unimpressed by the first of Fellowes’ four-part ITV serialisation, not least its writing-by-numbers feel. Many more viewers might have given up early on, but it took more than that to put off this self-confessed Titanorak. And once it got beyond the more obvious, here was another fine dramatisation, true to the core of the story – the latest worthy tribute to all those who perished.

A freelance writer and family man being swept along on a wave of advanced technology, but somehow clinging on to reality. It's only a matter of time ... A highly-motivated scribbler with a background in journalism, business and life itself. Away from the features, interviews and reviews you see here, I tackle novels, short stories, copywriting, ghost-writing, plus TV, radio and film scripts for adults and children. I'm also available for assignments and write/research for magazines, newspapers, press releases and webpages on a vast range of subjects. You can also follow me on Facebook via https://www.facebook.com/writewyattuk/ and on Twitter via @writewyattuk. Legally speaking, all content of this blog (unless otherwise stated) is the intellectual property of Malcolm Wyatt and may only be reproduced with permission.
View all posts by writewyattuk →
This entry was posted in Books Films, TV & Radio and tagged barmouth, chorley, godalming, Madness, southampton, titanic. Bookmark the permalink.