In Roy we trust … maybe

Hair product placement was the winner on Tuesday night, as we saw a rare glimpse of the real Wayne Rooney following our fortuitous victory over Euro 2012 hosts Ukraine.

Okay, going-bald gags are hardly the mark of great cutting-edge (excuse pun) humour. But at least we saw our wonder striker relaxed enough to take the mickey (rooney) out of himself and have a friendly pop at Mark Hateley-impersonating ’80s throwback and occasional scorer Andy Carroll in the post-match interview. And that’s got to be a good sign, surely.

One of the enduring images of the not-so-Fabio-after-all era was perhaps that training ground bust-up with the press and a distinct lack of bonding sensed about the whole operation. But with Roy Hodgson in charge there seems to be more of a ‘chillax’, the kind of laid-back mood popularised by a Prime Minister who recently left his daughter in the pub. 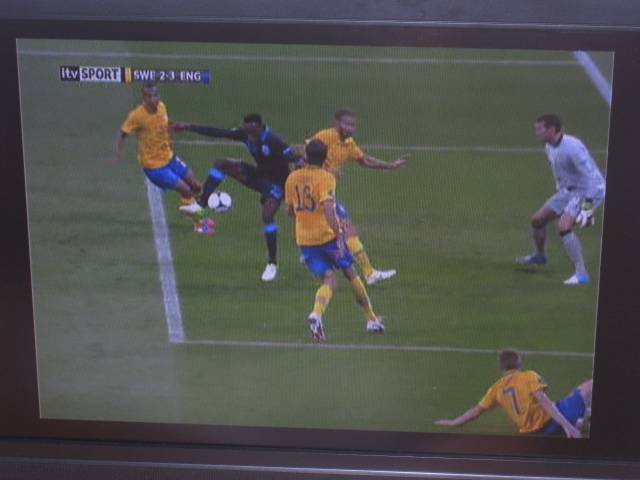 That doesn’t necessarily mean we’ll go much further this time of course. There was a similar ambience in the England camp at the 1998 World Cup finals. Remember all those player interviews as Glen Hoddle’s side racked up song title after song title in some bizarre (excuse record company pun) wager? They might even have gotten away with that a little longer if it wasn’t for the pesky boss’ Agadoo reference.

But 14 years later, we appear to be happy enough as ‘unfancied’ quarter-finalists, which might be a good idea with Italy up next, and Germany and Spain waiting in the wings. And the longer the nation doesn’t really believe we can do it, the better as far as I’m concerned.

While Roy Keane might have got a little tetchy at his own countrymen’s ‘sing when you’re losing’ mentality as Trapattoni’s Eire set about ensuring an early flight home, those rousing choruses of The Fields of Athenry ensured nothing but good-will for the Irish Republic, despite a pretty dismal showing.

It was sad to see both Poland and Ukraine knocked out so early, but you get the feeling both nations will quickly bounce back and stick around from here on in. Thankfully, the whole racist debacle we feared seems to have been marginalised so far. Instead, we have a sense of the better side of two proud host nations who not so long ago both heroically seized back their respective states from Soviet mastery.

In the past, maybe I’ve only truly relaxed and got to enjoy a tournament once England have been knocked out. But you get the feeling there’s still plenty of good stuff to come this time, despite our continued involvement.

Hats off to Roy for that. Expectations remain relatively low, but that’s a positive as far as I’m concerned. And there’s still plenty to look forward to as we reach the last seven games, not just from our boys – with hints of better to come from Portugal, Spain, France and Germany too.

Hopefully, there’s plenty more in the tank from Walcott, Welbeck, erm … Wooney, and co. There’s also something in Scotty P’s tenacity and Stevie G’s vision to warm the soul. Add to that the anticipation of the odd lung-busting run from Cole, Johnson, Lescott, Young and the O-C, and there’s even a little belief growing from this cynic. Perhaps more to the point, I feel less worried each time I spot JT and Joe Hart on the ball too, as their confidence returns.

It’s not just about us either. There’s all those over-elaborate Ronaldo step-overs to enjoy, and hints of form from Fernando Torres that must bring tears to the eyes of Chelsea fans.

It’s not only the skill factor either. You can play ‘spot the look-a-like’ too, on and off the pitch, and while Dutch boss and Paul Weller doppelganger Bert Van Marwijk is no longer involved, there’s still Wedding Present legend David Gedge masquerading as German boss Joachim Low, and an uncanny likeness between Czech star Petr Jiráček and West Ham legend Billy Bonds. Or maybe that’s just my beer goggles talking.

And if I can just avoid all those miserable buggers on radio phone-ins harping on about goal-line technology and England’s shortcomings, I’ll be alright from here on in. While we’re at it, maybe we can storm the ITV studios and somehow block them from showing those dreadful betting adverts during matches. That way, we’ll be assured an enjoyable last week and a half of the tournament, hopefully with an extra slice of ‘don’t give up your day-job’ comedy from the England camp along the way.

* Stay in touch with https://writewyattuk.wordpress.com for breaking news of a controversial end to the Yooro 2012 table football tournament group stages tomorrow.

A freelance writer and family man being swept along on a wave of advanced technology, but somehow clinging on to reality. It's only a matter of time ... A highly-motivated scribbler with a background in journalism, business and life itself. Away from the features, interviews and reviews you see here, I tackle novels, short stories, copywriting, ghost-writing, plus TV, radio and film scripts for adults and children. I'm also available for assignments and write/research for magazines, newspapers, press releases and webpages on a vast range of subjects. You can also follow me on Facebook via https://www.facebook.com/writewyattuk/ and on Twitter via @writewyattuk. Legally speaking, all content of this blog (unless otherwise stated) is the intellectual property of Malcolm Wyatt and may only be reproduced with permission.
View all posts by writewyattuk →
This entry was posted in Football, sport and tagged england, Euro 2012, European Championships, Football, soccer, sport. Bookmark the permalink.