Rambling on … after all these years

My Dad was only on the railways for eight years, but that 1953/61 spell as loco cleaner then fireman meant so much to him, and despite his following three decades as a postman, he never lost his love for steam.

I often wonder what would have become of him if he’d taken a different path, but instead  he oversaw from a close distance the steam engines making way for diesels and electrics,  having quit in a bid to seek a better wage for his growing family.

While his link with that world was partly severed in the early ’60s, the next generation of railwaymen witnessed first-hand the end of steam, including fellow Guildford-based fireman Geoff Burch.

Like my Dad, Geoff loved trains from an early age, watching ‘coffee pots’ and ‘flat tops’ pass the classroom window on the Guildford to Woking line, or visiting Brookwood, Reading, Woking and the capital with his trusty Ian Allan ABC spotting guide, hanging out at the Chalk Farm loco sheds, Kings Cross, Liverpool Street and Waterloo, getting his fix of A4 Pacifics, Britannia class locos, Castles and Kings. 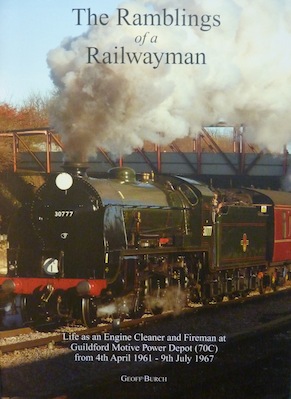 Geoff’s Story: The Ramblings of a Railwayman was published in 2011

In time, Geoff plucked up courage to speak to the drivers, with cab invites ever more frequent, finally leading to his own footplate days, as told in detail in his epic 2011 publishing debut The Ramblings of a Railwayman, covering his career journey from April 1961 to July 1967.

Athough my Dad moved on within six months of Geoff’s arrival, they shared a history and deep love and respect for all they saw and those they worked alongside – man and machine.

Geoff conveys all of that and more in his original memoir and newly-published follow-up Further Ramblings of Railwaymen (2012), a further epic providing valuable insight into that love of steam that was the dream for so many boys – the hope of one day becoming an engine driver, despite all its hard toil and unsocial hours.

While my old man watched from a distance as steam locos were in many cases needlessly scrapped – on the whim of a short-sighted ‘progressive’ Government in those dark days of the Beeching Report and all that – Geoff was there for those memorable last days.

His first book is all the more significant for its description of many of the characters who made the railways tick in the ’60s. This is no cold memoir about gauge measurements and engineering know-how. It is primarily about the working man. The fact that the author was a keen photographer helps, and as well as recording his early career with his camera, he stayed in touch with other railwaymen who did the same.

That included fellow firemen Alex McClymont and Dave Salmon, whose memories and pictures feature in his follow-up, and Lew Wooldridge, who had the foresight to  capture those halcyon days on 8mm cine film, recently released on DVD thanks to John McIvor and  SVS Films (with a link here). 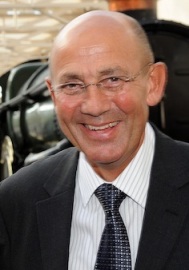 Many stills of railwaymen from that film made their way into Geoff’s labour of love, and that film and these two books perfectly encapsulate the era and give a moving (in more ways than one) record of an important era in our recent industrial past.

Geoff’s own railway career outlasted many of those locos (the ones no one could restore at the time), a transfer to Woking’s traction department in the late summer of 1967 as a ‘second-man’ leading to in-house exam success and eventual  promotion to driver status at Effingham in 1972, with later spells at Woking and Waterloo.

In time, he moved to the training side, and while privatisation led to the end of a 33-year career, he kept in touch with old workmates during a new chapter at Surrey Police, before returning to the rail industry in 2004.

Geoff’s first book covers his formative and firing days, the text and photos cataloguing day-to-day duties, his apprenticeship and working visits to London’s Nine Elms depot and those at Feltham, Reading, Fratton and Redhill, as he moved through the links. 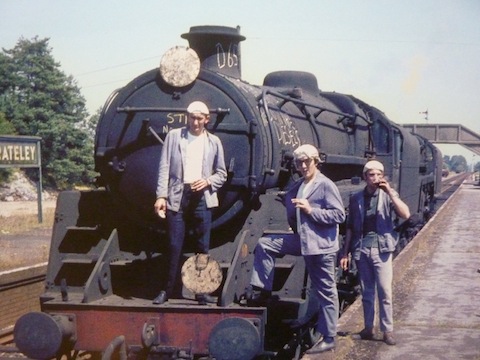 Among the more poignant photographs (and there are lots of superb shots) are those taken during those last days of steam, from 1965 onwards, on the doomed Guildford to Horsham line, then in more detail in 1967, including one taken across from the road I grew up in at Shalford, and several from the final Salisbury run on a baking-hot, emotional mid-July day, while hundreds lined the bridges and trackside en route.

Those halcyon days were also recorded on canvas by famed railway and wildlife artist and  preservationist David Shepherd, and he wrote an introduction to the first book, while respected railway photo archivist Mike Morant does the same for the follow-up.

What sets these books apart from many others in a congested market is his first-hand focus on the ordinary men who worked these lines. The publication of the first book would have been enough to secure Geoff’s place in steam railway lit, and his latest takes that  further, with a wealth of  superb photographs – many previously unpublished – illustrating these personal ‘rambling’ recollections.

Following Up: Further Ramblings of Railwaymen was published in late 2012

All those featured worked alongside the author at some stage, but while predominantly featuring Guildford, other Southern regions are covered too, as Geoff encourages his fellow railwaymen to commit their memories and photographs to print.

There’s a strong sense of brotherhood and solidarity throughout, and while the emphasis is on the post-war days of steam, there’s a respectful nod to railwaymen whose service started long before, some having signed on before the Great War.

It would take too long to detail each contributor’s story here, but Limerick-born Guildford recruit Pat Kinsella, the first featured, is as good an example as any, his memories of those early days as a cleaner and fireman including episodes such as the day his crew attempted a charge on Pinks Hill with an overloaded cement train, firing school exploits, carrying a circus train from Ascot West to Kingston, and countless conundrums amid snow, fog and smog. Then there’s his impassioned defence of an older generation of railwaymen wrongly labelled ‘conscientious objectors’ during their Second World War home service.

The afore-mentioned Alex McClymont and Dave Salmon tell similarly vivid stories of their initial days of service, with the wealth of great photographs they took in Guildford, Basingstoke, Woking, Weybridge, Nine Elms, Kings Cross, Waterloo, Clapham and Fratton, as well as further afield in further afield at Oxford, Crewe, Trafford Park, Edge Hill, Northwich and Workington, having proven invaluable. One taken at the deserted stores at Guildford is particularly evocative. 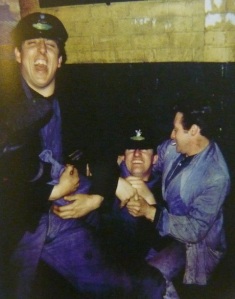 Brian ‘Brush’ Davey adds great tales and his own photographs, detailing various encounters and fellow personnel, from the story of the leaking ale barrel to an unexpected meeting with the Surrey Union hunt, and helping transport a farm from Surrey to Devon.

Tim Crowley’s ramblings stretch from bygone days in his native County Cork through to the preservation era at the Bluebell Railway, including his progress from firing to driving via Ashford, Nine Elms and Woking.

Guildford railwayman Roger Hope also tells compelling tales of his firing days, not least those hair-raising moments when it can all go wrong on the footplate, while Eric Hern adds a vivid picture of life on the country lines from his days at Petersfield before guard duties took him to Guildford.

It’s a similar journey for Jim Wattleworth, from his early days when the Isle of Wight had a whole network of branches and beyond redundancy in 1955 to a whole new set of firing memories at Nine Elms, Fratton and Guildford.

Then we have Bob ‘Ben’ Cartwright taking us from his formative rail exploits at Eastleigh through to his traction days then more recent Mid-Hants volunteer duties, giving a detailed account of life that underlines how it wasn’t all roses, despite all those enjoyable moments.

Fred Johnson is another who went the distance, eventually leading to instruction duties, his ramblings here centred on his days based at Salisbury, from 1948 onwards. And finally there’s Denis Turner’s description of firing duties at Weymouth and post-steam driving days at Dorking before he gave up the ‘juice’ for a later career as a police dog handler. 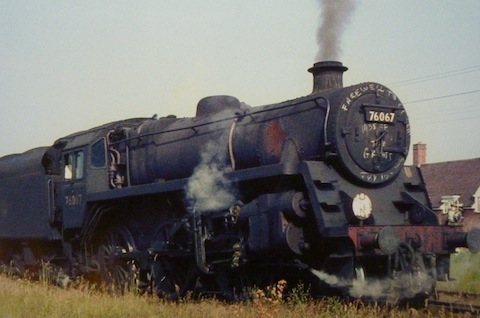 Once again, Geoff incorporates great photographs from David Christie and Gerald T Robinson, among others, giving us a window on a bygone era, and ultimately delivering a valuable record for prosperity.

As for the author, he’s certainly packed a lot into his official ‘retirement’ since 2009, and work is already underway for a third publication, offering a different dimension again, but one no less worthy.

In a genre where you tend to find extended caption books or windy wafflings, rarely do you get such a mix of the best of those elements – with the tales told often as stirring as the photography. And while these ramblings might not be for everyone – some may get lost in the detail here and there – they act as a superb testament to such a wonderful bygone era.

Update (November 2014): The Ramblings of a Railwayman has completely sold out in hardback but is still available as an e-book for £6.99 or on CD for £7.99. The remaining copies of the Further Ramblings of Railwaymen hardback are available at a bargain half-price of £12.50 as well as in e-book format (£6.99). For the hardback, add £5 per book for postage and packaging, enquiring via geoff.burch@hotmail.co.uk. Copies of the second book are also available at Ben’s Collectors Records, Tunsgate, Guildford.

Geoff Burch is also regularly out and about giving talks around Surrey and Hants on his books. Check his http://www.ramblingrailwayman.co.uk/ website for details of those events and much more.

A freelance writer and family man being swept along on a wave of advanced technology, but somehow clinging on to reality. It's only a matter of time ... A highly-motivated scribbler with a background in journalism, business and life itself. Away from the features, interviews and reviews you see here, I tackle novels, short stories, copywriting, ghost-writing, plus TV, radio and film scripts for adults and children. I'm also available for assignments and write/research for magazines, newspapers, press releases and webpages on a vast range of subjects. You can also follow me on Facebook via https://www.facebook.com/writewyattuk/ and on Twitter via @writewyattuk. Legally speaking, all content of this blog (unless otherwise stated) is the intellectual property of Malcolm Wyatt and may only be reproduced with permission.
View all posts by writewyattuk →
This entry was posted in Books Films, TV & Radio, Railways and tagged David Shepherd, Further Ramblings of Railwaymen, Geoff Burch, guildford, Nine Elms, Railways, Steam, Surrey, SVS Films, The Ramblings of a Railwayman, Woking. Bookmark the permalink.