Out on the town with Noddy and Mark 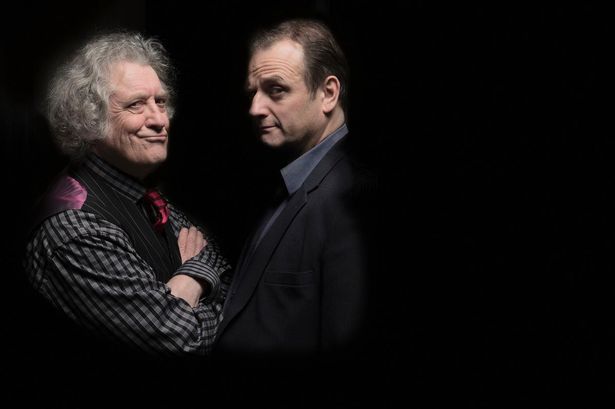 Come Dancing: Noddy Holder and Mark Radcliffe contemplate getting to grips with sequins for the next series of Strictly Come Dancing

I’M proud to say I was in the company of glam rock royalty at the weekend, 50 years after Noddy Holder’s introduction to that business called show.

And judging by his musical contributions to a night of good, honest chat with his (not quite so) old mate Mark Radcliffe on Saturday, May 18 – in front of an appreciative audience at Preston’s Charter Theatre – Neville John Holder certainly still has a voice to be proud of.

The much-loved singer, actor and entertainer took us over a two-hour two-act Look Wot You Dun show from his formative days in working-class Walsall to world superstardom and beyond, in what entailed a heady mix of nostalgia, poignancy and lots of laughs, neatly choreographed by his side-kick, the esteemed broadcaster, author and occasional rock star.

It was that dynamic that worked so well, His Royal Nodness happily reminiscing while his Old Boltonian chum chivvied him in the right direction.

It was a simple enough set-up, Radcliffe remotely operating a drop down screen from an old wooden kitchen chair, while Holder – resplendent in dandy-escue clothing awarding him the sobriquet ‘Mr Wonka’ from his accomplice – sat upon a garish gold-sprayed ‘throne’ and delighted his subjects with a wealth of stories roughly related to the on-screen images.

It wasn’t all just chat either, I for one in awe when the man himself picked up his semi-acoustic electric and thrilled us all with a few snippets and variations of some of his better known musical gems.

If I was to have one complaint, it would be that he didn’t pick that guitar up quite as much as he could have. But when he did we were left in no doubt that there’s still some mighty tonsil power there, despite the passing years.

While a fair few of us knew a lot of the stories – and let’s face it, this 45-year-old reviewer was one of the younger audience members on the night – you couldn’t help but lap up the re-telling – as indeed seemed to be the case with Radcliffe, although he’d clearly heard them many times before.

It was a strange set-up, the idea of Sir Nodward holding court with his long-time pal perhaps just a little too odd to work. But it did work, offering a truly intimate insight into Nod’s inspiration, craft and amazing back-story.

From those formative years onwards, Noddy – just shy of his 67th birthday, yet still with a winningly boyish-rogue charm – delighted with his repartee, starting out with a few words about his first band the Memphis Cutouts and his Steve Brett & The Mavericks era before his 1966 switch to join Wolverhampton trio Dave Hill, Don Powell and Jim Lea – then a schoolboy – in the ‘NBetweens, in turn giving rise to the band’s re-brand as Ambrose Slade.

That included anecdotes from the band’s hippy and breakthrough skinhead eras, while their Hamburg days made for quite a bit of dialogue, the off-stage antics during that musical apprenticeship seemingly as impressive as The Beatles’ German coming of age. And from that mirrored top hat to his handyman penchant for mending things in hotel rooms, there was plenty to talk about.

Now and again, Holder was liable to tell us just a little too much, but Radcliffe was there to interject and put him back on track, proving something of a skilled interviewer as well as a sharp wit – despite his much-loved outer John Peel-esque dithering.

Dynamic Duo: Noddy and his assistant Mark at their recent audition for Dr Who

Radcliffe also clearly knows his subject well enough to gently take the mickey hucknall too, not least when he picked up – several times – on Nod’s inept Black Country-infused impressions of various key-players – from his German promoter through to Slade and Jimi Hendrix boss and ex-Animals bassist Chas Chandler to Bryan Ferry and Freddie Mercury (later named as one of Mr H’s three dream dinner guests). As he remarked on the night after one such impression, “John Culshaw must be shitting himself!”

The first stop for a song was a golden moment, Holder reaching for his six-string and effortlessly treating us to a couple of verses of what he suggested was the first Slade song he properly wrote, his acoustic rendition of Coz I Luv You bringing a tear to the eye for this emotional reviewer. And in its stripped-down form you could clearly see the influence of Django Reinhardt and Stephane Grappelli on Holder and classically-trained violinist Lea.

It was the first time I’d seen Holder perform live in person since a memorable night as a teenager 30 years before at Hammersmith Odeon, and he certainly didn’t disappoint, that big voice of his showing no obvious sign of fatigue.

The big time soon followed of course, with Holder still seemingly amazed at just how big Slade got. But I think we all knew what was coming next, the section about the car crash which killed Powell’s girlfriend and came close to finishing off the band’s gum-chewing drummer – at the height of their pop star powers – such a sad chapter in this great rock’n’roll story.

On a lighter note, we were treated to the earlier, more hippy version of Merry Xmas Everybody, with its Won’t You Buy Me A Rocking Chair chorus line, leading to Radcliffe enthusing about his hero’s rightful place in our national festive identity.

After the break, the duo were back, initially wearing face masks of each other, the camaraderie continuing as Noddy answered questions from the audience – some submitted before curtain up via written notes, others shouted from the stalls.

Some you could guess, like whether Nod would be making any celeb TV appearances soon (with Strictly Come Dancing for one not ruled out, trivia fans), and whether our own favourite Time Lord might become the next Dr Who (complete with talk of the public mistaking him for not only Jon Pertwee, Tom Baker and Colin Baker , but also – bizarrely – Peter Davison!). 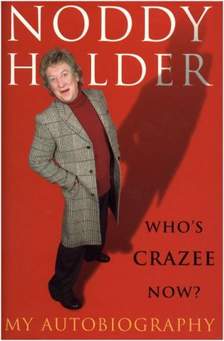 The best question for me was the succinct written enquiry that simply asked “Suzi Quatro – did you?” (his swift answer an emphatic ‘no’ regarding his good friend and former tour-mate, I might add), before the pair sat down again to show a clip from the band’s film Flame, discussing that film and the band’s and public’s initial reaction, and how it was slowly recognised as something of a cinematic masterpiece.

There followed an early version of Far, Far Away from Holder, complete with an original chorus line with a passing resemblance to Status Quo’s Rockin’ All Over The World, one Lea thankfully replaced with his contribution to a true classic.

The banter continued, Radcliffe revealing how Mr H had ensured his co-act went to the toilet before he returned to the stage, complementing the image of these two troubadours as father and son in certain respects.

That whole ‘rock stars as big kids’ element was further magnified by an anecdote about Holder being told by Chandler back in ’74 to ‘go to your room’ and finish Far, Far Away, after he flippantly came up with its memorable opening line while relaxing on the banks of the Mississippi during a US tour. And there were similar nuggets and gems throughout.

Eventually, we got to the band’s nadir and following re-birth after an appearance at the Reading Festival in Ozzy Osborne’s absence in 1980, those heavy and almost soft rock latter days followed by the split and – on this occasion – inevitable questions about Holder’s part in breaking up the band, something he couldn’t really deny – having grown uneasy with that rock’n’roll lifestyle as the years advanced, not least on the back of various offers to do other projects outside Slade.

Meanwhile, our Neville batted off the reformation questions, although you got the feeling  he wouldn’t be averse to at least releasing a few acoustic recordings – from those wondrous TV appearances on The Grimleys – although he wasn’t thrilled by the prospect of the public appearances that would surely follow.

There were even a few laughs about how Nod considered applying for the recent vacancy as lead singer with Don and Dave’s latest Slade incarnation, although he did point out that he couldn’t really pass for the ‘age 30’ limit his old band-mates suggested in their ad.

There was a further poignant moment as this son of a window-cleaner acknowledged the debt he owed his parents for backing his bid to become a professional musician 50 years before, at a time when that really couldn’t have seemed a great career option.

And while it was great to see a clip of Vic Reeves and Bob Mortimer’s vision of Slade in Residence and Banger’s appearance in Bob the Builder again, I’ll gloss over the less-romantic image that followed as we were subjected to Noddy’s infamous glass table anecdote (if you dont know it, just be thankful).

On that bum note, pretty soon the dynamic duo were away. But not before leaving us on a high with a duet on Chuck Berry’s Johnny B. Goode, Radcliffe quick to ensure his guitar-buddy got the mightier applause before a typically-friendly Holder-esque grin and fond farewell.

* With special thanks to Nigel McIntyre

* For writewyattuk’s December 2012 appreciation of all things Slade, head here

A freelance writer and family man being swept along on a wave of advanced technology, but somehow clinging on to reality. It's only a matter of time ... A highly-motivated scribbler with a background in journalism, business and life itself. Away from the features, interviews and reviews you see here, I tackle novels, short stories, copywriting, ghost-writing, plus TV, radio and film scripts for adults and children. I'm also available for assignments and write/research for magazines, newspapers, press releases and webpages on a vast range of subjects. You can also follow me on Facebook via https://www.facebook.com/writewyattuk/ and on Twitter via @writewyattuk. Legally speaking, all content of this blog (unless otherwise stated) is the intellectual property of Malcolm Wyatt and may only be reproduced with permission.
View all posts by writewyattuk →
This entry was posted in Books Films, TV & Radio, Comedy & Theatre, Music and tagged Chas Chandler, Dave Hill, Don Powell, Dr Who, Freddie Mercury, Jim lea, Mark Radcliffe, Noddy Holder, Preston Charter Theatre, Slade, Strictly Come Dancing, Suzi Quatro, Vic, walsall, wolverhampton. Bookmark the permalink.

5 Responses to Out on the town with Noddy and Mark