So there we were, seven dates into Gary Numan’s ‘intimate’ club tour, and another venue was feeling the love for this prime mover in electronica.

And here was proof – if it were needed – that age has not sullied our Los Angeles-based visitor’s creativity. In fact, he’s on something of a career high right now.

If your mind has become clouded and you’ve more recently (and rather lazily) lumped Numan in with the 1980s’ weaker synth-pop moments, think again.

The evidence is not just in the live shows either.

I’d recommend you go out there and belatedly catch up with last year’s Splinter (Songs from a Broken Mind) as a starting point. You may well rediscover an artist who richly deserves his place in our musical history.

It seems rather apt that on this occasion it was Preston, somewhat synonymous with the Industrial Revolution, playing host to an artist who helped redefine electronica.

Before the industrial sounds of Sheffield shone through, there was Tubeway Army and a certain foot soldier born Gary Webb enhancing the punk and new wave spirit with a little clever reinvention.

And despite a few lean years in between, he remains as committed to his cause, as seen with stunning results on Splinter, and so brilliantly showcased here.

Gary Numan was at 53 Degrees in an extension of last year’s Splinter world tour, taking in various otherwise-forgotten towns and cities.

So on my doorstep I could judge for myself why this artist has proved so influential to so many bands over the past 35 years.

Before the main attraction, we were treated to the engaging vocals of Liela Moss and her outfit Roman Remains.

It was a worthy indication of what was to follow, fusing old-style goth with modern dance sensibilities, the band’s live presence a great advert for debut album Zeal.

Think Catatonia meets Chvrches on some tracks, imagine Bjork tackling Siouxsie Sioux on others. We should hear a lot more about this three-piece.

On to Numan, and all night this 56-year-old defied his advancing years. In fact he looked and acted younger than I ever recall, not least with his other-worldly balletic moves.

The US-based synth legend seamlessly switched between guitar, keyboard and dance expression, and you could barely take your eyes off him, despite the overall power of this five-piece band.

From mighty ear-bashing 2011 instrumental intro Resurrection and latest single I Am Dust onwards, the throbbing around 53 Degrees suggested the foundations might be undermined and this venue might not even reach its proposed December 31 end-date.

It was loud, to the point where the eardrums were still whistling the following morning. And that doesn’t happen so much these days.

Numan’s band never stepped back from there, moving on to the metronomic soundscape of Metal, from the ground-breaking The Pleasure Principle, to a backdrop of Martian red planet lighting.

That set us up for a second selection from Splinter, the colour scheme changing to ghostly green as we experienced the orchestral mind-warp of an impassioned Everything Comes Down to This.

I was aware of the false ending, but was just one of many caught out as the band re-emerged from the darkness to herald a mighty climax.

Films was next, another selection from his defining era, the evocative original updated with cutting edge 2014 effects amid a wall of sonic power.

Here in the Black is another great moment from last year’s critical success, its almost-Yello whispered opening building to another cacophony of beautiful noise.

Numan seemed to switch back into soundtrack mode – if he ever leaves that zone – for The Fall, from Dead Son Rising, threatening an almost dalek-like swirling aural attack.

From there we returned to Splinter for The Calling, Numan as the lost boy amid orchestral touches that were subtle but powerful all the same. 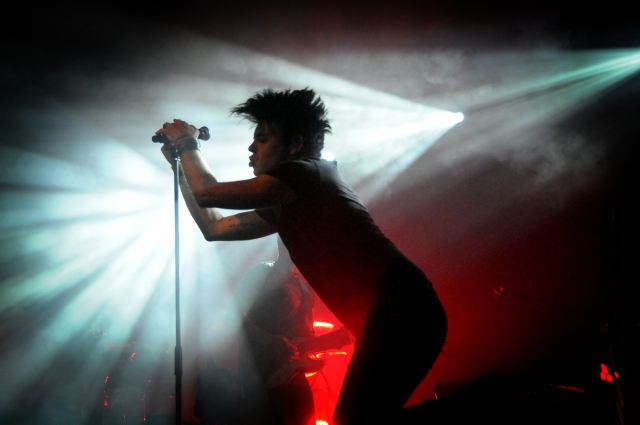 Such was the perfect fit that it took me a while to realise we’d hit Replicas classic Down in the Park, this redefined 2014 version slower and more brooding than I ever recalled.

A more mellifluous mood was further enhanced with last year’s Lost, its sweet lullaby qualities backed up by that deep bass throb as band and audience tried to catch their respective breaths.

Reaction to the unmistakeable intro of Cars was as you might expect. And however over-played these past decades, it remains Gary’s finest pop moment.

While his career almost hit the bricks in the ’90s, there was a nod to the earlier signs of resurgence on 2000 album title track Pure, the artist rediscovering something of that old power, its shouty chorus particularly stirring.

He’s slowly built on that, and 2013 drum-driven title track Splinter, almost-anthemic slow-builder We’re the Unforgiven and the wondrous Love Hurt Bleed brought us up to speed.

The latter was difficult to follow, a simple searing synth riff gorgeously complemented by that earthy drum and bass framework. If ever a song was meant to top the dance charts, this is it.

There was still time for one more, Baba O’Riley keyboard playing us into emotional 2000 show-stopper A Prayer for the Unborn.

An Elvis-like mumbled ‘thank you very much’ followed, Numan’s first direct words to his audience, and there was no mistaking the artist’s big smile as he returned and the band launched into 1980 single I Die You Die.

That wasn’t all, and a 21st century re-imagining of Are Friends Electric? shone out, stripped down to claustrophobic vocals and simple piano verses that surged into mighty choruses.

Then he was away with My Last Day, slowly building to an emotional crescendo of piano, drums and orchestral layering – as perfect a finale to the live show as the album.

If you get the chance, catch the man himself in person. Exactly 35 years after that first hit, Gary offers an altogether-energetic and emotive live set. It’s electronica as it should be.

* If you missed the recent interview with Gary Numan on this blog, try here.

* For more details on Gary Numan and his forthcoming dates and plans, head to his official website here.

A freelance writer and family man being swept along on a wave of advanced technology, but somehow clinging on to reality. It's only a matter of time ... A highly-motivated scribbler with a background in journalism, business and life itself. Away from the features, interviews and reviews you see here, I tackle novels, short stories, copywriting, ghost-writing, plus TV, radio and film scripts for adults and children. I'm also available for assignments and write/research for magazines, newspapers, press releases and webpages on a vast range of subjects. You can also follow me on Facebook via https://www.facebook.com/writewyattuk/ and on Twitter via @writewyattuk. Legally speaking, all content of this blog (unless otherwise stated) is the intellectual property of Malcolm Wyatt and may only be reproduced with permission.
View all posts by writewyattuk →
This entry was posted in Music and tagged 53 Degrees, Are Friends Electric?, Dead Son Rising, Gary Numan, Liela Moss, Preston, Replicas, Roman Remains, Splinter, The Pleasure Principle. Bookmark the permalink.