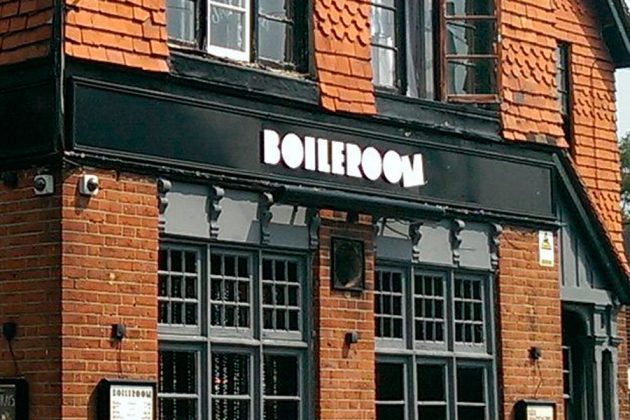 The Venue: Guildford music and community arts space the Boileroom

Many of the bands I love have graced my hometown in the past, yet for some reason it never quite happened with The Wedding Present.

First time I went to see them was down the A246 in Fetcham in 1986, but they were double-booked and had already scarpered, and from there the closest they came to my old patch was for numerous visits to Reading, London and the South Coast.

That didn’t really bother me. Those venues – with the exception of the rather-lacking University of London Union – were better than Guildford could offer at the time anyway, and the Civic Hall wouldn’t have felt right. But three years ago they visited another old haunt, Aldershot’s West End Centre, and now at last were booked to play just a couple of streets away from Al, a fellow TWP gig regular back in the day and my landlord for the night.

With tickets disappearing as fast as David Gedge’s feverish fretwork, fair play to the team responsible at music and community arts venue the Boileroom, for what proved not only to be a sell-out but a top night all round. As someone based 240 miles away in Lancashire since the year the Weddoes released Watusi (1994), I was slightly aghast at the ale prices, but nonetheless impressed at the transformation of this Stokefields local I previously knew as the Elm Tree.

The venue’s managers – on board since 2006 – clearly have a love of and affinity with good music, and are also responsible for nearby Stoke Park’s Always the Sun festival (which runs from September 8/10 this year), where the last bill included Guildford-associated luminary Hugh Cornwell, who not only inspired the outdoor event’s name but has also played the Boileroom.

As one of just a handful of UK dates before a North American tour then various George Best 30th anniversary shows back home, we were treated to a rich mix of material from down the years on Wednesday night. From The Wedding Present’s point of view, it was certainly a love crowd,  and Gedge and co. rose to the occasion, the lead singer’s trademark banter with the assembled as warm and engaging as ever, while the audience were not only mad for the bigger hits. 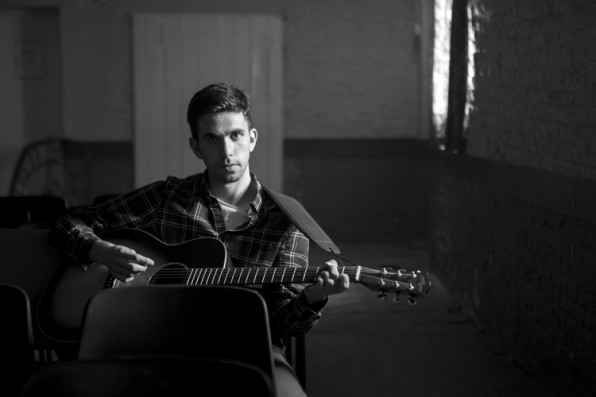 I wasn’t sure how it would work when I stepped inside. There were only around a dozen of us there by half seven, including support act Andy Ruddy and a certain fella of whom John Peel proclaimed, ‘has written some of the best love songs of the rock’n’roll era’, with ‘the boy Gedge’ stood behind the merchandise stall at that point, maybe wondering what he’d let himself in for.

Yet the venue steadily filled during a laid-back acoustic opening from Andy Ruddy, originally from Bradford, this likeable singer-songwriting talent not long out of the studio after recording his second album. In fact, he apologised for not being quite so in love with some of his songs, having heard nothing but them for the last couple of weeks.

He was similarly downbeat about his first album, suggesting he was unlikely to ever celebrate that with a 30th anniversary tour. So when he announced after one song, ‘Jesus, I sounded melancholy there’, Al and I expressed our confusion, wondering if there was a time when he hadn’t been in that state of mind.

That said, I get the impression that’s just his West Yorkshire ‘not up himself’ manner, and we kind of warmed to his less showy demeanour while reckoning he’s secretly proud of his material. He should be anyway, judging by songs like my personal highlight, All You Needed. Hopefully we’ll hear more of him soon.

Pretty soon, we had a 1972 recording of Philip Larkin reading the environmentally-aware poem that inspired the name of the most recent TWP album, Going, Going …, with the Boileroom buzzing by now and the main act set to fill every inch of this packed venue with a wealth of sonic delights.

While there were six cuts from the latest album, old favourites You Should Always Keep in Touch With Your Friends and What Did Your Last Servant Die Of? were first, leading to early word-count conundrums for this scribe while tackling his Surrey Advertiser version of events.

Gedge was certainly soon at ease in his new environment, jovially complaining about the mistuning of his guitar for the opening song, before a rare live performance of 1991 b-side Mothers by cult New Zealand outfit The Jean-Paul Sartre Experience.

There had been two personnel changes since my last TWP outing at Hebden Bridge’s Trades Club two and a half years ago, Danielle Wadey moving from occasional keyboards to bass and Marcus Kain now giving it some on guitar. Actually, I should imagine Danielle and drummer Charlie Layton were also going for it, but a pillar obscured my view, so I was concentrating on the new German addition and the bandleader, with plenty of on-stage chemistry between them.

We took a heavy trip on Take Fountain’s Interstate 5 before Gedge reflected on the 12 videos made in single-heavy 1992, saying he was proud of all those promos apart from next selection Love Slave, no doubt leading to a post-gig viewing frenzy on YouTube as we reminded ourselves why. Thankfully the song remains far more appealing.

Next, I was transported back to a bedroom two miles away in Shalford in 1987 on Anyone Can Make a Mistake. Don’t get any ideas though – it was my folks’ house, and I’m alluding to my first vinyl plays of REC 006/12 and LEEDS1. Bizarro’s What Have I Said Now? was next, keeping the nostalgia topped up, prompting a shout from the back of ‘Take Me’, the singer asking if that was a song request or a proposition. Either way, it never happened.

At that stage we had the latest instalment of the TWP Facts live feature, Danielle sharing her new-found knowledge of Guildford, in the record books for the first recorded game of cricket in the 16th century. And that fascinating nugget of local knowledge led to two more fine cuts from the latest LP, Fifty-Six’s Orange Juice-like instrumental climax followed by Bear, all the more gorgeous for the bass player’s close harmonies with Gedge. 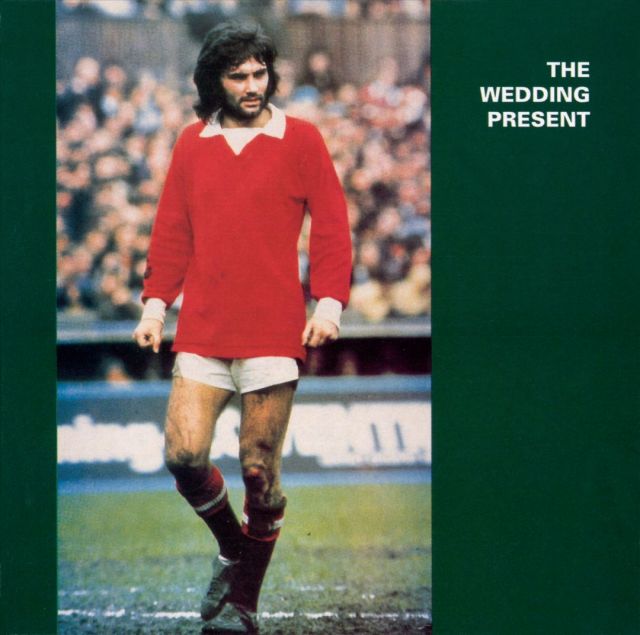 We returned to those ’92 super-hits for other-worldly crowd-rouser Flying Saucer, before mention of the summer’s planned George Best 30th anniversary tour led to the band tackling the mighty Everyone Thinks He looks Daft, inspiring feverish audience reaction, as was the case for the chart-worrier that followed, 1989’s Kennedy, bringing the biggest roar of the night.

There was a lot of love too for Seamonsters’ openers Dalliance and Dare, no less sharp for the passing of – yikes – 25 years, Gedge and Kain gloriously rampant on guitar.

And then – after a wrap-up conversation from Gedge in which he did the obligatory explanation of not playing encores, thanked everyone for coming and courteously enquired if we’d all had a great night – they wrapped up with the epic Santa Monica, even fitting in a few lines of a non-seasonal No Christmas in there. Awesome all round.

As the main man voiced at one stage, “I can’t believe we haven’t played here before,” to which one punter suggested they came back the following night. And while the Brighton-based frontman admitted it wasn’t a bad idea, he did add a non-committal, ‘We might not be here, but …’ Long may The Wedding Present story continue though, and here’s hoping my old manor won’t have to wait another 30 years until the next visit.

For a wealth of past writewyattuk TWP features and reviews, try these links:

Valentina review/appreciation of the band (July 2012)

To find out all the latest on The Wedding Present and forthcoming dates, try the band’s Scopitones website and keep in touch via Facebook and Twitter.

For more details on Andy Ruddy, his live itinerary, and how to get hold of his recordings, try his site or keep in touch via Facebook and Twitter.

A freelance writer and family man being swept along on a wave of advanced technology, but somehow clinging on to reality. It's only a matter of time ... A highly-motivated scribbler with a background in journalism, business and life itself. Away from the features, interviews and reviews you see here, I tackle novels, short stories, copywriting, ghost-writing, plus TV, radio and film scripts for adults and children. I'm also available for assignments and write/research for magazines, newspapers, press releases and webpages on a vast range of subjects. You can also follow me on Facebook via https://www.facebook.com/writewyattuk/ and on Twitter via @writewyattuk. Legally speaking, all content of this blog (unless otherwise stated) is the intellectual property of Malcolm Wyatt and may only be reproduced with permission.
View all posts by writewyattuk →
This entry was posted in Books Films, TV & Radio, Music and tagged Always the Sun, Andy Ruddy, Bizarro, Boileroom, Bradford, Charlie Layton, Danielle Wadey, David Gedge, George Best, Going Going, guildford, Hebden Bridge Trades Club, Marcus Kain, Philip Larkin, Seamonsters, The Jean-Paul Sartre Experience, The Wedding Present. Bookmark the permalink.