The Orchids / The Chesterfields / The Suncharms – Preston, The Continental

In these uncertain times, I’m all for reaffirmations that things ain’t so bad after all, and three treasured indie bands put plenty of smiles on faces at a Lancashire riverside pub venue on Friday night, serving up a feast of neat lyrics, winning melodies, singalong choruses and chiming guitars.

The early 1990s’ so-called ‘shoegaze’ scene rarely resonated with me. I saw Ride, Lush, and a few others, but felt little of that rush of DIY post-punk indie from a ‘what shall we do now?’ era on the alternative scene. Yet while Tuff Life Boogie’s evening openers were lumped in with all that, they seem to transcend those roots.

The Suncharms certainly hit the ground running at The Conti, a power-blasting Wash Away putting me in mind of Bobby Gillespie fronting The Wedding Present. And they barely drew breath from there, next offering Spaceship again including a Gedge-esque six-string climax.

There was at least one new song and suggestions of more to come soon, this Sheffield five-piece’s re-emergence attracting a sizeable following, most crossing the Pennines to see their heroes’ first live outing since ‘93. And thankfully there was no evidence of the pudding bowl hairdo sported by frontman Marcus Palmer on their new retrospective CD cover. In fact, they’re all wearing well and scrubbed up alreet on the neet.

As well as the Weddoes – apparently David Gedge once suggested their previous name The Eunuchs wasn’t the greatest – at times there were Teenage Fanclub touches from guitarists Matt Neale and John Malone, while Marcus shook his tambourine to a beat dictated by a formidable drum and bass engine-room stoked by Chris Ridley and Richard Farnell respectively.

And for me they were at their best on Magic Carpet, Marcus stepping up a gear, the band then seeing themselves out in style with the epic She Feels and One I See. 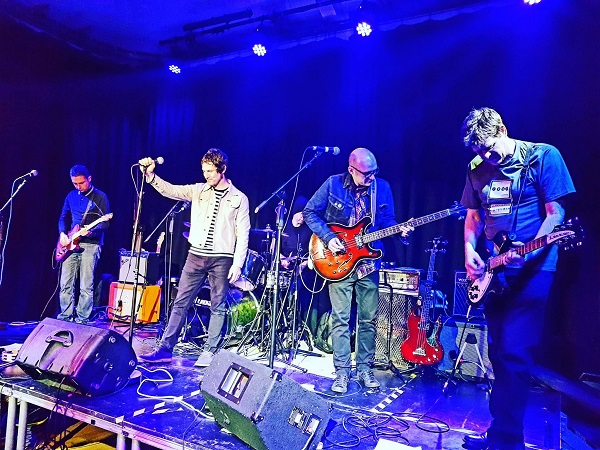 Next were The Chesterfields, my eagerly-awaited first live sighting of this Wessex outfit in close to 30 years. And while there were early nerves, that inspired added warmth from the audience. They hadn’t had the greatest journey North, and didn’t quite do gorgeous opener Shame About the Rain credit, yet started to find their feet on fellow Kettle cut Oh Mr Wilson and Crocodile Tears’ Lunchtime for the Wild Youth.

By then the band dynamic was apparent too, and while clearly missing Davey’s stagecraft they work together as a unit, lead guitarist Andy Strickland – also on board for a short spell in ’87 – proving a key addition. And it was the latter calling the crowd closer – much of the Yorkshire contingent having momentarily retreated to the bar – for This is Pop, a fine song borrowed from Simon, Hel and drummer Rob Parry’s other band, Design.

A new arrangement of Let It Go did Simon’s brother Mark Barber’s song justice, while Andy shone on a golden oldie from The Caretaker Race, the late ‘80s outfit he formed after leaving Pete Astor in The Loft (so to speak). But while Anywhere But Home is also pushing 30 – hints of Bobby Freeman’s Ramones-covered Do You Wanna Dance arguably taking it back even further – it proved as fresh as a blooming orchid, you could say.

There were no brass effects, yet Hel and Simon supplied a few ‘ba-ba-bahs’ on the bright and breezy Goodbye Goodbye, before the timely arrival of Last Train to Yeovil, no doubt confusing any loco-spotters supping a pint at this hostelry in the shadows of the West Coast Main Line’s bridge over the River Ribble.

They were on a high now, and I’d have happily heard at least another half-dozen tunes. And it’s worth nothing that Helen’s smile was as big as Simon’s sense of relief that it had gone pretty well after all. Time had run away though and it was pretty clear which songs they’d finish on, suggesting we Ask Johnny Dee where they were staying that night (they weren’t so sure at that point) before the glorious Completely and Utterly rounded things off nicely.

Talking of smiles, frontman James Hackett wore a grin as big as his Caledonian city throughout The Orchids’ set. That went for the entire band actually, guitarists John Scally and Keith Sharp flanking inside-forwards James and Ronnie Borland (bass) in a four-up-front formation, the latter pair’s … erm, distinguished hair suggesting something of a Father Ted convention.

It’s something of a crime that may have perplexed DCI Jim Taggart that they aren’t better known, but there’s still time to catch up on a band up there with the finest Scottish ’80s and ’90s exports, at times reminiscent of Aztec Camera, Belle and Sebastian, The Go-Betweens (Scottish by association), Lloyd Cole and the Commotions, Orange Juice and the afore-mentioned TFc, and arguably an influence on later arrivals Camera Obscura and King Creosote.

They started with 1994’s Obsession No.1 before She’s My Girl and the super-catchy Something’s Going On illustrated their quality output since 2004’s return in a ‘best of’ set spanning 15 years of great tunes. There was many a singalong en route too, not least on ‘89’s It’s Only Obvious, while the more recent Another Saturday Night and Hey! Sometimes kept the vibe alive.

The band showed their earlier edge on 1989 single What Will We Do Next before the more reflective Welcome to My Curious Heart from their Sarah Records swansong Striving for the Lazy Perfection, while Peaches proved a perfect theme tune on the night, the softly-lilting studio cut becoming an inspirational anthem live, the crowd more than willing to, ‘Get yourself high, feed your soul, set yourself free!’

We were clearly in the realms of classics now, 1990’s Something for the Longing and Bemused, Confused and Bedraggled nothing short of wondrous, that ‘make me happy, make me smile’ line truly evocative, The Sadness of Sex (Part One) and Caveman further highlighting the band’s writing range.

Negotiations followed as to how long an encore they could manage, the rest of the band stepping aside as James gave us an acoustic guitar-fuelled Blue Light from Lyceum, before pondering, ‘If my mother could see me now’. There was just time for unrehearsed early b-side Apologies too, re-started after a little on-the-job training for John, with James telling us, ‘If Adele can do it, so can I’. And that was the last hurrah on a night of gorgeous hooks and all-round good vibrations, all three groups staking a claim to The Chesterfields’ saviour status, breaking our hearts with those electric guitars in their hearts.

Many thanks to Julie Wright for the live photographs, with these and more also featured on the Last Day Deaf webzine (also featuring interviews with all three bands), with a link here.

For the latest from The Orchids, check out their Facebook group page via this link. To keep up to date with The Suncharms and see where to get hold of their CD, try here. And for all the news from The Chesterfields try them via Facebook and also check out Design (including details of their debut CD, Black Marker Red Marker) through this link.

Finally, just in case you missed it, this site also recently featured an in-depth interview with Simon Barber of The Chesterfields and Design, linked here.

A freelance writer and family man being swept along on a wave of advanced technology, but somehow clinging on to reality. It's only a matter of time ... A highly-motivated scribbler with a background in journalism, business and life itself. Away from the features, interviews and reviews you see here, I tackle novels, short stories, copywriting, ghost-writing, plus TV, radio and film scripts for adults and children. I'm also available for assignments and write/research for magazines, newspapers, press releases and webpages on a vast range of subjects. You can also follow me on Facebook via https://www.facebook.com/writewyattuk/ and on Twitter via @writewyattuk. Legally speaking, all content of this blog (unless otherwise stated) is the intellectual property of Malcolm Wyatt and may only be reproduced with permission.
View all posts by writewyattuk →
This entry was posted in Music and tagged Andy Strickland, glasgow, indie, James Hackett, Marcus Palmer, Preston, Sheffield, shoegaze, Simon Barber, The Chesterfields, The Continental, The Orchids, The Suncharms, Yeovil. Bookmark the permalink.

1 Response to The Orchids / The Chesterfields / The Suncharms – Preston, The Continental