Getting on for four decades after he sold his first vinyl, I’m pleased to say that Gordon Gibson shows no sign of wanting to step away from Action Records in Preston.

The much-revered Gordon, originally from Stranraer, has been in charge of the celebrated Lancashire store since first picking up the keys in the early ‘80s, having got his grounding working market stalls in not so far off Blackpool. And this year’s itinerary alone proves Action Records remains at the cultural heart of his adopted city, with a number of impressive promotions lined up.

Coming soon, there’s an in-store signing of a new album by The Alarm involving front-man Mike Peters (July 5th), while punk legends The Damned put in an appearance in April, as did the up’n’coming Cabbage in March and The Wombats in February, while Gordon co-arranged a successful event at the nearby Blitz nightspot in May, co-arranged with Blitz’s Peter Alexander, featuring happening outfit Blossoms.

He also gave me brief details of two more events in the pipeline, the first with up-and-coming group The Blinders (date not yet revealed), while another was being finalised with Lancaster band Massive Wagons (August 16th), again at Blitz. And in the past, there have been promotions involving the likes of Bastille, Dirty Pretty Things, The Magic Numbers, Muse, Reverend & The Makers, The Rifles, Starsailor’s James Walsh, We Are Scientists, Willy Mason, and many more.

While Gordon’s in his mid-60s now, he’s clearly still got the hunger, his shop even the subject of a revealing short documentary back in 2015, ‘Chased by Nuns’ (with a YouTube trailer link here).

“Oh yeah. I tell you, if you didn’t have some sort of passion, you wouldn’t do it. You really have to be into it. There’s that many ups and downs, but you just put up with all that. And these gigs and in-store things are just great.”

I always get the feeling that the wider media are only really interested when it comes to Record Store Day. Then they all disappear for a while.

“You’ve just got to accept that, but we’re always working on something, and nowadays you obviously needed this social media thing. The bottom line is that you’ve always got to have something to say. If you just sit around and don’t do anything, you won’t have anything to say. Plus, you might just have some nice new releases coming in, especially now with the vinyl again. It’s encouraging the record companies to at least stay with the physical, as opposed to that download-only way of working, which happens a lot with new singles. Of course, these days when we’re told there’s a new single out, chances are that it won’t be what we see as a new single. It’s more likely a download picked up off an album. But they’ll call it a single, which is rather annoying.”

Action Records has served as an influential label in its time too, revered in indie circles over the years via releases from the likes of The Boo Radleys, Fi-Lo Radio, Preston’s own  Big Red Bus and Dandelion Adventure, plus the late Mark E. Smith and his legendary band The Fall. And most recently there was The Common Cold, featuring Dandelion Adventure’s Marcus Parnell and Ajay Saggar plus former Cornershop drummer Dave Chambers, a past Action Records employee, putting out their album, Shut Up! Yo Liberals!

“Well yeah. The lads were just going to do it themselves, but they just needed that bit of help with the distribution and all that. So I kind of jumped on board with that. And that turned out really well for them.”

And there’s been that real shift in recent years, not just with the re-emergence of vinyl sales and interest, but also with the merchandise stand at live gigs becoming more and more important to bands trying to make a living from their craft.

“Oh yeah. You really have to think about that. If you have a band, I always tell everybody – even if it’s just a young artist playing a social acoustic gig – it’s better if he’s got even a little CD there. That’s the time when you’re going to get people willing to pick something up. Then it’s in the memory. If you’re doing gigs, you should try and have something you can sell. And if you’re more established, you need to be doing all the merch – t-shirts and all sorts, as we’ve done in the past with bands like The Fall.”

How long was Action Records a market stall before Gordon – whose past staff have also included Nick Brown of The Membranes and Kentish Town’s Intoxica Records fame –  moved to Preston?

“I think it was a couple of years. Maybe two to three years in Blackpool. I did have another little shop in the middle of Blackpool for a bit. My brother ran it for us a little while, near where the bus station used to be.”

That’s Andy Gibson, who also featured with post-punk outfit The Genocides, whose raw debut single ‘Is That Alright?’ was the first released on Gordon’s label, their two-track slice of vinyl including a run through The Heartbreakers’ ‘Born to Lose’. Anything become of them from there?

“Well, at the time, it was that style of music between punk and moving away towards hardcore punk, but they were more like Johnny Thunders.”

As shown by that cover version. It sounds great too. You captured a real energy on that recording.

“Oh yeah. They did another 7”, but then it kind of petered out. And Andy was working for me anyway.”

Anyway, sorry Gordon. Where were we?

“Back in Blackpool, there was a market on Bond Street, called Charisma. An Indian guy had this small indoor market, around six to eight stalls. We were right at the front, then did another one. The first year we were just coming off South Shore Pier. Then we moved down Bond Street, where we were open all year, not just for the summer.”

It was in 1981 that Gordon moved his business to its current Church Street base, to a shop the city’s older generation may recall was once home to Preston North End and Scotland right-back Willie Cunningham’s sports shop. And over time, Action Records expanded and took over more space. But how did he get involved in the music industry in the first place?

“I kept getting made redundant! I’d done an awful lot of jobs. I worked in Preston docks when it was still a dock. My yard was where it’s now McDonald’s, with containers coming in for wagons. I was in the Merchant Navy when I was 16.”

His link with Preston came after hitching a lift in 1971 with Lancashire couple Alan and Sheila Cookson to the Lincoln Folk Festival, with James Taylor, The Byrds, Buffy St Marie, Sandy Denny and Tim Hardin among the headliners that year.

“I always think there are some things in life where just one decision can straight away change your whole life. I suppose after being made redundant all those times, you decide, ‘You know what? I’m going to try and see if I can set something up with records’.

“I had a big record collection and started buying as well as selling. And when I got that lift to Lincoln, that couple, Alan and Sheila, they picked me up and … I mean, you can’t realise how your whole life from that point changes. It’s amazing. With that lift, I was totally away on a different angle.” 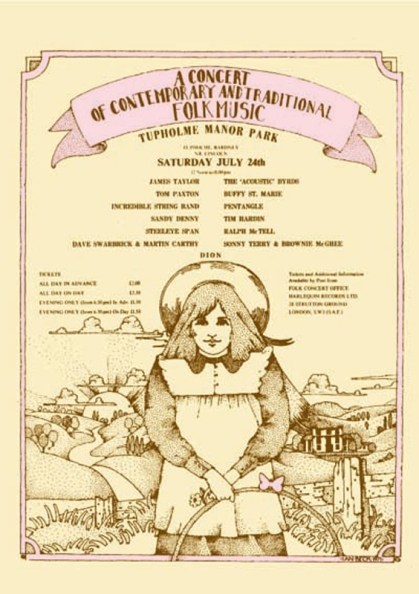 And all because of a personal message received live on air via legendary DJ Whispering Bob Harris, I understand.

“Yes, I went back to Stranraer after the festival. Do you know, I think I might even have been 19 or 20 actually, because I was still living up there. Alan and Sheila dropped me off at Preston and I hitched back. Then, a few days later, Bob Harris read out that they were trying to contact me, even giving out a phone number. I don’t think they would do that today!”

These days, Gordon’s a father of three, ‘not as if they’re as mad into music as me, I’m afraid. It’s kind of different with people today.’ That said, he tells me one of his sons helps with Action Records’ website.

“But I work a ridiculous amount of hours. Maybe it’s best to get a normal job where you get holidays and everything like that.”

You’re also one of the few people who properly got to know the late Mark E. Smith of The Fall, getting beyond the public persona maybe.

“Well, we worked together for about 15 years. There is that public persona, although he probably was like that most of the time. But we dealt with that, kept it as easy business, and we got on fine. I always think, don’t try and get too close to people. That’s where you go wrong. Talk when you need to talk, ask what you need to do, discuss things. If we don’t agree on something, well. There were plenty of disagreements over the years, but in the end things always worked out.”

So what was the first record you bought?

“The Beatles’ ‘Twist and Shout’ EP. I’ve still got a copy, stuck on a shelf somewhere.”

“That was a big memory for me. And Bob Harris actually DJ’d on that tour. In them days, bands would take DJs out, playing records between sets. They were stars too.”

Any plans to retire from the day-job sometime soon?

“What would I do? People say that, but I’m so busy doing things.”

I’m guessing you’ll say you haven’t got time to retire.

“I haven’t, literally. Sometimes it’s not so good, but bloody hell, it’s not boring!”

And does heading to the office involve a longer commute these days?

“No, I live in Bamber Bridge. Even when working in Blackpool I had to travel from Preston every day.”

So it made perfect sense to find a shop here.

“Oh yeah, especially when you didn’t take enough to pay the bus fare some days!”

For all the latest from Action Records, including in-store and gig promotions, head to their website. You can also keep in touch via Facebook and Twitter.

A freelance writer and family man being swept along on a wave of advanced technology, but somehow clinging on to reality. It's only a matter of time ... A highly-motivated scribbler with a background in journalism, business and life itself. Away from the features, interviews and reviews you see here, I tackle novels, short stories, copywriting, ghost-writing, plus TV, radio and film scripts for adults and children. I'm also available for assignments and write/research for magazines, newspapers, press releases and webpages on a vast range of subjects. You can also follow me on Facebook via https://www.facebook.com/writewyattuk/ and on Twitter via @writewyattuk. Legally speaking, all content of this blog (unless otherwise stated) is the intellectual property of Malcolm Wyatt and may only be reproduced with permission.
View all posts by writewyattuk →
This entry was posted in Books Films, TV & Radio, Music and tagged Action Records, Blackpool, Bob Harris, Chased by Nuns, Cornershop, Dandelion Adventure, Gordon Gibson, Mark E Smith, Preston, Stranraer, T.Rex, The Alarm, The Boo Radleys, The Common Cold, The Damned, The Fall, The Genocides. Bookmark the permalink.