Posted on November 5, 2018 by writewyattuk

It seems a little arse about face to start a review with the opening encore, but it was Eric Bogle’s ‘The Green Fields of France (No Man’s Land’) that sent shivers up the spine on Saturday night.

A song The Men They Couldn’t Hang introduced me to in 1984 can still silence a room. And that takes some doing when sections of the audience are wont to talk through the quieter moments.

‘Green Fields’ seemed all the more poignant when we’re about to mark the centenary of the Armistice, the song – and Stefan Cush’s interpretation of it – as powerful today in questioning why this never truly did become the war to end all wars, slaughter on both sides still difficult to get your head around, not least when we’re all too quick to forget the grim reality and plunge head-first into the next conflict.

If you know the original, you may recall its Scots-born Australian writer – now 74 and Adelaide-based – wrote it five years after 1971’s ‘And the Band Played Waltzing Matilda’, a further harrowing expose of the cost of war I first heard in 1985, when it was delivered in similarly-stirring style by The Pogues.

And while Bogle made his point perfectly in a more understated way on both songs, it was Cush’s more emotional delivery on ‘Green Fields’ that made me sit up and take notice. 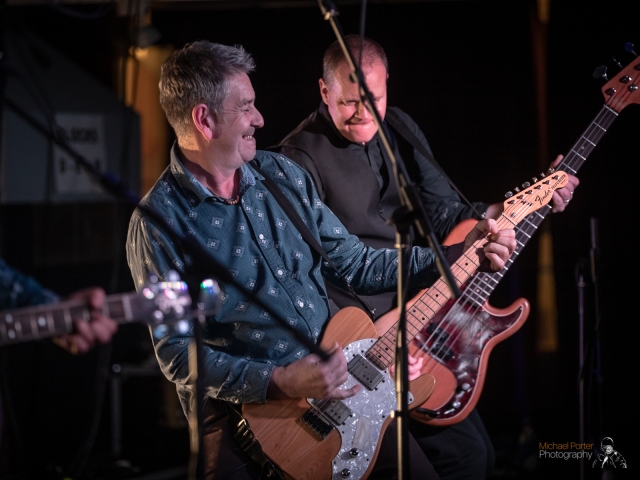 Written 60 years after ‘Willie McBride’ lost his life in France, here we are 42 further years on debating the merits of our European union, the far right growing stronger again, The Men They Couldn’t Hang still speaking out, their ‘80s alternative anthems as relevant today as when they were first voiced.

Take for instance ‘Ironmasters’, Paul Simmonds’ tale of the Chartists as powerful today, a true fanfare for the common man. Then there’s ‘The Ghosts of Cable Street’, afforded extra poignancy after the death of centenarian Max Levitas, the last of the protest leaders in that laudable East End battle.

On a similar front, we had further early TMTCH highlights ‘Going Back to Coventry’ and ‘Shirt of Blue’, on a night when they kicked in with ‘Gold Rush’, a fellow Simmonds How Green is the Valley favourite.

The first record was well represented too, Phil ‘Swill’ Odgers finding his voice on ‘A Night to Remember’ and soon tackling ‘Hush Little Baby’, both of which made me realise in ’85 there was far more to The Men than just polemic (great as that was). And we also got ‘Wishing Well’, a song I mistakenly thought was their own until its writer, Nick Lowe released his version. Yet, like ‘Green Fields’ it quickly became theirs.

From third LP, Waiting for Bonaparte there was ’Bounty Hunter’, ‘Smugglers’, and ‘The Colours’, crowd favourites all, while from Silver Town we had ‘Rosettes’. But this was no legacy act night out, and we had a brief taste of 2014’s The Defiant in barndance-storming ‘Raising Hell’, and five great cuts from the new album, the splendid Cock-a-Hoop.

When Cush barks out the earlier classics, you wonder how his voice has ever lasted, but he was perhaps at his best – with new-found vocal maturity – on the self-penned ‘Salutations’. For a moment it was as if Springsteen and the E-Street Band had ridden into town.

Similarly, ‘Sirens’ offered a perfect introduction to the strength of the new material, while Swill’s ‘Three Ships Sailing’ – with just Simmonds for company – deserved far better from those who took the opportunity to catch up with old mates mid-hall, on a night when the band struggled with the acoustics, the venue seemingly conspiring against them, the sound-man kept busy. A similar fate befell Cush as he tackled Simon and Garfunkel’s ‘The Boxer’, delivered in Billy Bragg-esque style on his Telecaster.

‘Arrow’ certainly hit the target, Swill in fine form (his voice ever richer) and the band truly dynamic, providing further proof that this six -piece – as they were on this occasion – have plenty more gallons in the creative tank.

Four songs later they were away, the solemn ’Green Fields’ – and I was amazed how many of us knew every line – followed by the wake, and a number that’s been there since day one, our visitors seeing us home in style on ‘Walkin, Talkin’’. And on the evidence of this outing, hopefully there will be several more nights to remember in their company.

Several of the remaining tour dates are now sold out, but for remaining ticket details and more on new LP Cock-a-Hoop and other projects, try their website and keep in touch via Facebook, Instagram, or Twitter. And if you missed this site’s recent feature/interview with Phil ‘Swill’ Odgers, head here.

A freelance writer and family man being swept along on a wave of advanced technology, but somehow clinging on to reality. It's only a matter of time ... A highly-motivated scribbler with a background in journalism, business and life itself. Away from the features, interviews and reviews you see here, I tackle novels, short stories, copywriting, ghost-writing, plus TV, radio and film scripts for adults and children. I'm also available for assignments and write/research for magazines, newspapers, press releases and webpages on a vast range of subjects. You can also follow me on Facebook via https://www.facebook.com/writewyattuk/ and on Twitter via @writewyattuk. Legally speaking, all content of this blog (unless otherwise stated) is the intellectual property of Malcolm Wyatt and may only be reproduced with permission.
View all posts by writewyattuk →
This entry was posted in Books Films, TV & Radio, Music and tagged Cock-a-Hoop, Eric Bogle, Ghosts of Cable Street, How Green is the Valley, Ironmasters, Night of a Thousand Candles, Paul Simmonds, Phil Odgers, Preston, Stefan Cush, The Defiant, The Green Fields of France (No Man's Land), The Men They Couldn't Hang, the Pogues, Waiting for Bonaparte. Bookmark the permalink.