Posted on November 6, 2018 by writewyattuk 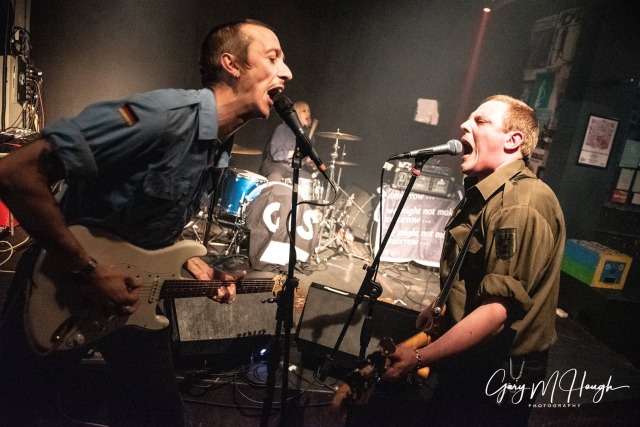 You know you’re at an intimate gig when, stood by the bar with pint in hand, a manic bass player frantically threads his way past you, mid-song.

I’d have happily paid the £3 on the door (three quid, I tell you – there’s value for money writ large) solely to witness the bemused look on one punter’s face as he headed to the exit and had to step over that same band member, on his side on the floor yet somehow still not missing a note.

Welcome to the intense world of Girls in Synthesis, up from that there London village, dropping by in Lancashire for a night of extremely compelling noise terror, the band proving trademark raw, and surely on the precipice of big things.

Apologies if the words ‘frantic’ and ‘intense’ appear again here, but that’s how it is with this frenetic (another word likely repeated) three-piece. Keep music live? They wouldn’t know any other way.

Influences? They mention Crass, The Fall and Gang of Four, and there are hints of solo Graham Coxon. But for me that’s all overwritten by the spirit of early Wire, to a point where I felt at least a couple of songs were about to head into the short-sharp-shock treatment of ‘1-2-X-U’.

That never quite happened though, this three-piece very much their own animal, the chemistry between them clear to see, making it rather surprising they’ve only been around two years.

I mentioned extreme noise, but that belittles their integral understanding of melody, structure, barbs and hooks. For all their DIY thrash and self-styled ‘obtuse punk’ sensibilities, here’s a band as clever in parts as the afore-mentioned Wire or early XTC, and at times stoking the fire of a young Jam newly enthused by Dr Feelgood and The Who. In short, this is one switched-on, highly-attuned trio.

Visually, you might see the post-punk stylings – industrial-grade factory work-shirts and half-mast trousers – and expect them to sound more like Joy Division. But while there’s a nod to Ian Curtis’ catatonic dance patterns in their frenetic (there it is again) movement, there’s something far more stripped back, lean, mean, driven and dynamic.

At the back, Nicole Pinto (if you ever wondered how Patricia Arquette would have suited punk percussion duties …) put down the powerhouse beat somehow keeping this collective in line, her drums and John Linger’s guttural bass totally calling the shots, her focus barely leaving her bandmates.

That eye contact is integral between all three, guitarist Jim Cubitt – part-Ralf little, part-Kevin Rowland – with pupils fixed on co-vocalist Linger, while his co-songwriter threaded right back on to his fellow front-man.

When I mention front-men, we’re talking front-of-house. Promoter Marcus Parnell (of The Common Cold and Dandelion Adventure indie fame), asked us to come on in, get in their faces, feel the heat. But they were already one step ahead, getting in ours instead.

At times it’s as if Pinto had her attack dogs on a long lead. You were never more than a heartbeat from being taken out by a headstock. But they were totally in control, their intuitive choreography more than a match for the pumped-up energy.

As the set gathered space (not as if it was ever in lower gear) Cubitt and Linger (they sound like estate agents, but sure as hell ain’t) were ever more part of the crowd, the barrier between band and awed fans truly torn down.

I seem to recall all three were briefly on the low stage. Not for long though, soon carrying their mic. stands back and forth, Linger crouching to add lines as his slipped – yet still not missing a note – and even climbing the bottom stairs at one stage, never losing that eye contact.

The impassioned vocals are sometimes imploring, other times angry – neatly complemented by that searing guitar and feedback – but always spell-binding, and from the moment they launched into the title track of forthcoming ‘Fan the Flames’ EP we were caught in the headlights.

The despair-ridden incendiary charge of ‘Splinters and Rust’ from the first EP further gripped us, while the new release’s ‘Howling’ took us into performance poetry territory, and apocalyptic warning shot ‘We Might Not Make Tomorrow’ mesmerised, more than a little Devoto-era Buzzcocks represented.

Then we had the seething ‘Sentient’, its ‘no choice’ mantra suggesting something of a 21st century take on ‘Career Opportunities’, followed by the burbling bass-fired ‘The Mound’, the two front-men filling any gaps on the dancefloor, the engine room rhythm still pumping, the aural assault continuing.

Finally, ‘Internal Politics’ fired the last salvos in a mighty sound barrage, our guests leading the applause, a shell-shocked audience without the energy to convincingly shout ‘more’ themselves.

Soon enough, fellow three-piece Erskine Brown had the unenviable task of following that, and it was always going to be a near-impossible task. Yet this self-styled psychedelic industrial synth-punk combo gave it a good go in a commendable stage-turn.

Gremlins in the works made it that much harder, yet the debut live shift from Jack Harkins (vocals, bass, also with The Common Cold), Johnny Ligament (guitar, synths, sounds) and Robert Dunne (drums) ensured they played their part on an entertaining night.

Local lads Erskine Brown may be (with the name familiar to Rumpole of the Bailey fans, and yeah, I know what you’re thinking – typical rock’n’roll influence), but the influences are more global and all bely the vocalist’s age, and again there are signs here of something special.

There was a nod to Public Service Broadcasting with the nicely-spliced film clips on the big screen behind (and who could fail to be warmed by seeing footage of Bamber Bridge FC running out against the Czech Republic in 1996?), and that proved a welcome distraction when the dreaded ‘technical difficulties’ kicked in beyond promising opener ‘Cabin Fever’.

It was never going to be the longest set, but it was curtailed far too soon, the guitarist having a ‘mare with the electrics. They finally kicked back into gear for the mighty, Stranglers-esque ‘Don’t Want it’, and while the Dave Greenfield-like keyboard touches on the recorded version were missing, a pared-down version still impressed.

As it turned out, they were soon forced to give up the ghost, the gods seemingly against them on this occasion. But they’ll have learned from the experience and be back all the stronger, their next appearance already looking promising.

For details of how to get hold of new Girls in Synthesis EP ‘Fan the Flames’ and catch the band live head to their Bandcamp page or keep in touch via Facebook. And for th elatest from Erskine Brown head to https://www.facebook.com/erskinebrownband/

A freelance writer and family man being swept along on a wave of advanced technology, but somehow clinging on to reality. It's only a matter of time ... A highly-motivated scribbler with a background in journalism, business and life itself. Away from the features, interviews and reviews you see here, I tackle novels, short stories, copywriting, ghost-writing, plus TV, radio and film scripts for adults and children. I'm also available for assignments and write/research for magazines, newspapers, press releases and webpages on a vast range of subjects. You can also follow me on Facebook via https://www.facebook.com/writewyattuk/ and on Twitter via @writewyattuk. Legally speaking, all content of this blog (unless otherwise stated) is the intellectual property of Malcolm Wyatt and may only be reproduced with permission.
View all posts by writewyattuk →
This entry was posted in Music and tagged Bamber Bridge, Crass, Erskine Brown, Fan the Flames, Gang of Four, Girls in Synthesis, Graham Coxon, Jack Harkins, Jim Cubitt, John Linger, Marcus Parnell, Nicole Pinto, The Common Cold, We Might Not Make Tomorrow, Wire. Bookmark the permalink.