Posted on September 11, 2019 by writewyattuk

Slam Dunk: Edwyn Collins at home while venues up and down the UK hid their biscuits in readiness for his visit.

Amid the post-summer holiday trudge back to work, I reckon we all need pick-me-ups, familiar despondency at days getting shorter and temperatures dropping – irrespective of global warming crises – taking its toll.

Meanwhile the Government and UK itself is on its arse amid ill-thought out, poorly-executed, blinkered policy, democracy itself on the rack as self-interested, destructive forces gather on both sides of the Atlantic.

“And you turn to them and you say, ‘Love is in this season’.

But the seasons change, then what will you believe in?

When the winter comes, that’s when I’ll be leaving.

I leave to find a way to break out of this world.” *

But I’ll remain positive thanks to the healing power of music. And hope will triumph over hate all the time we’re party to moments such as those experienced on Sunday night under the railway arches off Whitworth Street, Manchester, Edwyn Collins showing us the way forward.

Surely you know the background story by now, so I’ll cut back on any further pre-amble, other than to mention how this gifted artist’s return from the brink remains nothing short of an inspiration. And this was no consolation prize, but a celebration of exquisite songwriting and great musicianship, a love crowd willing on the players.

We got off to an enlightening start courtesy of openers Gabi Garbutt and the Illuminations, their set enough to convince me to snap up debut LP, The Discredited Language of Angels, each track showcased here neatly delivered. 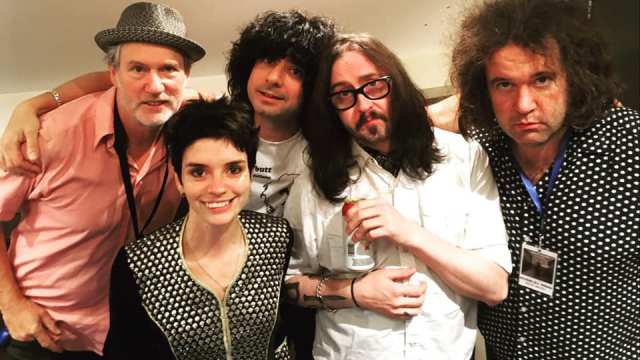 My gig buddy on the night, Jim, and I felt they might have stepped out of any of the last few decades, and there was certainly a late ‘70s new wave vibe. The last track had a touch of fellow Londoners The Only Ones, and I imagined snatches of everyone from Graham Parker and Chrissie Hynde through to 21st century indie stars The Kooks and The View.

Part of the ‘70s throwback vibe was probably channelled from Gabi’s hairy band, who might just have stepped out from dates backing Alex Harvey or Alice Cooper. But a further element took them to another level, the LP’s producer Sean Read, a long-time Edwyn Collins cohort with past links to Dexy’s, adding sax, keyboards and the same soulful touches afforded the main act later.

Check out cracking single, ‘The Fool’ and Gabi’s Soundcloud page, then get that record ordered. Mainstream success will follow … if there’s any justice.

We were soon into the hits, 40-plus years of gems led off by Orange Juice’s ‘Dying Day’ – no brass on this occasion, but still a delight – and edgy recent single, ‘Outside’, a tribute to those heady days of post-punk, the harmonies spot on.

Edwyn has seldom stood still throughout a glittering career, the next two choices reflecting that, ‘What Presence’ and ‘I Guess I’m Just a Little Too Sensitive’ examples of one such style swerve, when Dennis Bovell was at the controls 35 years ago.

We were back to the new LP for another indicator that EC’s writing acumen remains intact, ‘It’s All About You’, while ‘In A Nutshell’ reminded this punter of a period when he belatedly discovered the joy of 1982’s, You Can’t Hide Your Love Forever’, a turntable must for me from the mid-80s onwards.

We fast-forwarded a quarter-century for Home Again’s sparky ‘One Track Mind’ before William Collins stepped up, nervous as hell by the look of it, joining Dad for a touching ‘In Your Eyes’ from Losing Sleep, the sheer relief on his face in the closing bars as poignant as the brief kiss landed on his father’s head on departure.

Occasionally our star performer was briefly lost, struggling with memory, a lyric or the ability to express himself. But only briefly, his bandmates there for him and the audience willing him on, his humour and warmth coming over loud and clear and his talent intact.

I admit brief disappointment when ‘Upwards and Onwards’ didn’t follow the sumptuous  ‘Intuition Told Me, Pt. I’, but only fleetingly, ‘Simply Thrilled Honey’ in its place providing a Postcard from the past.

We returned to 2007 for a wistful ‘You’ll Never Know (My Love)’ before Badbea’s beautifully atmospheric ‘It All Makes Sense to Me’ and similarly reflective ‘I Guess We Were Young’, each already as familiar as the rest of a distinguished solo catalogue.

Talking of young, we stepped back to the days when Orange Juice briefly ruled the pop world, the zeitgeist of the times bottled in soulful reinvention masterpiece, ‘Rip it Up’, with no visible or audible signs of wear on this airing.

By the time he delivered early solo single ‘Don’t Shilly Shally’, Edwyn was on his feet, determination personified, and confident enough to swirl his stick around as we reached the sublime ‘A Girl Like You’. Timeless, and to coin a phrase from this neck of the woods, another music from a different kitchen.

I expected a fairly short outing, so was pleasantly surprised (simply thrilled, in fact) by a 15-song set. And it was soon clear it wasn’t over yet, with three cheers for our side as Edwyn returned, hearts duly melted as he and Carwyn delivered ‘Home Again’, a proper ‘pin-drop’ moment, the latter’s harmonies and delicate acoustic picking perfect accompaniment for the star of the show.

Back came the rest for ‘Badbea’, better than ever for these ears, before two more blasts from the past, the evergreen ‘Falling and Laughing’ followed by the Bonanza-like intro of  raucous crowd favourite ‘Blue Boy’, those formative Glasgow School days recounted in a fitting finale on a night of sheer emotion from a treasured artist in a room full of friends. 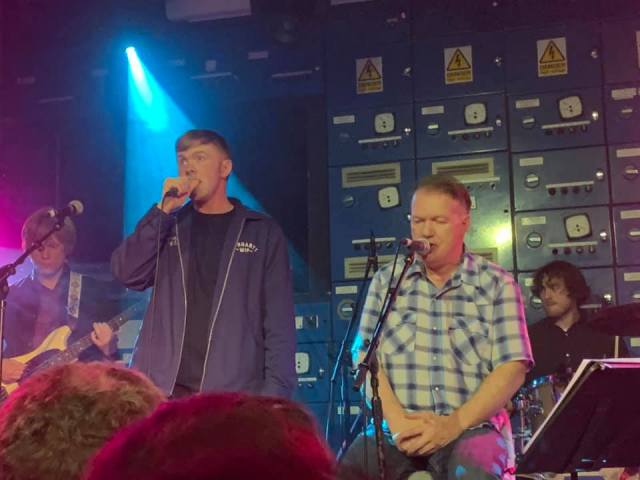 Family Way: William Collins with his Dad for an ‘In Your Eyes’ duet at Gorilla, Manchester (Photo: Jim Wilkinson)

For this website’s recent feature/interview with Edwyn Collins and Grace Maxwell, head here.

For the latest from Gabi Garbutt, including details of her September 24th LP launch at The Slaughtered Lamb in East London, head to her Facebook and Twitter pages.

A freelance writer and family man being swept along on a wave of advanced technology, but somehow clinging on to reality. It's only a matter of time ... A highly-motivated scribbler with a background in journalism, business and life itself. Away from the features, interviews and reviews you see here, I tackle novels, short stories, copywriting, ghost-writing, plus TV, radio and film scripts for adults and children. I'm also available for assignments and write/research for magazines, newspapers, press releases and webpages on a vast range of subjects. You can also follow me on Facebook via https://www.facebook.com/writewyattuk/ and on Twitter via @writewyattuk. Legally speaking, all content of this blog (unless otherwise stated) is the intellectual property of Malcolm Wyatt and may only be reproduced with permission.
View all posts by writewyattuk →
This entry was posted in Books Films, TV & Radio, Music and tagged Andy Hackett, Badbea, Carwyn Ellis, Dennis Bovell, Edwyn Collins, Gabi Garbutt, Glasgow School, Gorilla, Home Again, Little Barrie, Manchester, Orange Juice, Rip It Up, Sean Read. Bookmark the permalink.