The Wedding Present – back at the Boileroom, Guildford 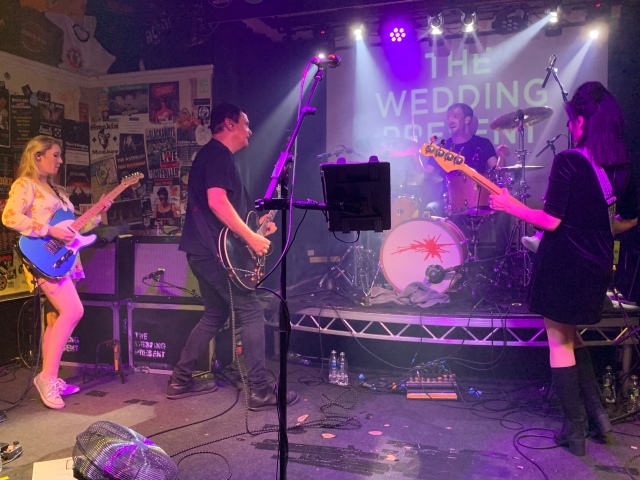 Three Wedding Present shows in less than three years in my hometown after 30-plus years without a single visit, and again all unfolding at the Boileroom, Stoke Fields, a few minutes’ walk from our Alan’s. Another winning night in store, not least for my fellow attendees, both about to reach landmark birthdays, one over from Finland to mark the occasion.

However, the events you look forward to most don’t always hit the spot, and there was a danger that might be the case, the situation ultimately saved by a storming last third of the set.

Those who read my take on February 2017’s visit (with a link here) may recall me moaning about the price of the ale in house, so this time we called pre-gig at our nearby local … but that ultimately proved a mistake. By the time we arrived at the venue, the place was packed – the show long since sold out – and it was all we could do to squeeze through to the left for a half-glimpse of the stage.

It wasn’t just the view affected but the sound too, David Gedge’s between-songs banter partially lost in a setting where talk from the bar drifted. I turned and glared, but it seemed to be coming from further away. The same applied for the quieter numbers, not so much drowned out as distorted. Of at least 24 past personal Wedding Present encounters from Glastonbury to Reading, London to Portsmouth, and Hebden Bridge to Preston, and a further four Cinerama shows in Manchester, I wondered if this might be the worst. Why would people pay £20 for a ticket then jaw all the way through? It was beyond me.

I could see the Boy Gedge (guitar, lead vocals) and Melanie Howard (bass) okay, but didn’t slap eyes on Charlie Layton (drums) all night, and it was only when Danielle Wadey (guitar) stepped up to the mic. that I could tell she was out there. Don’t ask me how that baby bump of hers is coming on.

Wonderful Copenhagen: From the left – Danielle Wadey, David Gedge and Melanie Howard, out front with The Wedding Present, live in Denmark on a Bizarro anniversary date, September 2019 (Photo: Nicklas Rosén)

Still, I was back from Lancashire for the weekend, on my old patch, in great company and in the presence of the semi-legendary Wedding Present. Why complain? And from the moment they kicked into ‘California’, ‘Brassneck’ and ‘Crushed’, there was no doubting the quality.

The louder the numbers the better, but too often Gedge’s banter with the crowd and his band was lost, as was the case when less-committed punters didn’t seem to know the songs. Promising new track ‘Don’t Give Up Without a Fight’ and lesser-known 2008 number ‘Hulk Loves Betty’ suffered accordingly, separated by Festive Fifty fave ‘A Million Miles’, the crowd briefly attentive.

I got the impression many of those assembled lost interest beyond 1992, this evergreen outfit mere reminders of indie youth gone by. But as so many of us know, they’ve missed out on so much, as next choices ‘Deer in the Headlights’, ‘Montreal and the sublime ‘Click Click’ proved, the harmonies on the latter never failing to impress.

Talking of more recent indie-pop perfection, there was ‘Rachel’ too, but I was too distant to experience its subtle charms. The fact that I was getting dripped on by overhead pipes running parallel to the stage further distracted, the crowd chatter continuing through ‘Don’t Touch That Dial’, ‘Fifty-Six’ and further new number, ‘Telemark’, lost on so many.

But then came a seismic shift, Gedge’s questioning ‘Oh why do you catch my eye then turn away?’ signalling the wondrous ‘Everyone Thinks He looks Draft’, a large swathe of those in front heading forward to dance up front, that extra couple of feet gained making all the difference, the sound if not the overall visual spectacle much improved. 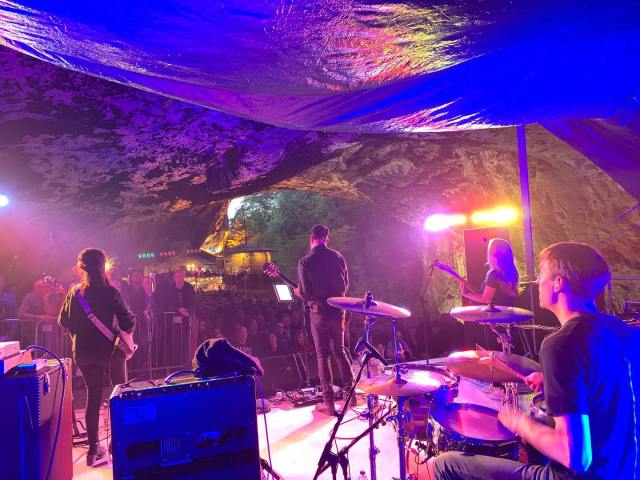 On they went with ‘Heather’, ‘You Should Always Keep in Touch With Your Friends’ (I have, that’s why I was here), and a pleasing take on 1980 Magazine classic, ‘A Song From Under the Floorboards’, and it was the show I’d hoped for. Still the pipes dripped, but it didn’t matter. They didn’t seem corrosive.

‘Kennedy’ was next, the pub erupting into an unseemly siungalong, while that gloriously grungey tell-tale opening riff of ‘Corduroy’ ensured we remained on a high, this finely-honed quartet finishing in style with the always-thrilling ‘Flying Saucer’ and the most heart-searing of break-up songs, ‘My Favourite Dress’. In fact, that final third was up there with my very best TWP experiences, perhaps more accentuated by the disappointment experienced earlier.

It was a memorable occasion for the band too, David revealing that Danielle and Charlie were heading ‘off on leave’ that night, the long-serving duo about to become a three-piece in their own right, a baby on the way. And it has to be said that we got ahead of ourselves after, raising a few glasses back at the King’s Head at the prospect of a new arrival in the Scopitones camp. Cheers both.

Don’t think for one moment that’s scuppered matters for the main man either, two new members already in rehearsal, the next dates lined up, starting in Köln this Thursday (November 28th), four mainland Europe engagements followed by 10 more on home ground before the year is out. Yes, The Wedding Present continues apace, and here’s to the next mesmeric instalment.

To check out the most recent WriteWyattUK Wedding Present live review, from their visit to Blackpool’s Waterloo Bar in late July 2019, and further links to a 2014 interview with David Gedge, past reviews and an earlier band appreciation, head here. You can also check out my take on David‘s recently-published SleeveNotes book here.

For details of The Wedding Present’s remaining 2019 live dates and screenings of George Best documentary, Something Left Behind, try this Scopitones link. You can also keep in touch with David Gedge and co. via Facebook, Instagram and Twitter.

A freelance writer and family man being swept along on a wave of advanced technology, but somehow clinging on to reality. It's only a matter of time ... A highly-motivated scribbler with a background in journalism, business and life itself. Away from the features, interviews and reviews you see here, I tackle novels, short stories, copywriting, ghost-writing, plus TV, radio and film scripts for adults and children. I'm also available for assignments and write/research for magazines, newspapers, press releases and webpages on a vast range of subjects. You can also follow me on Facebook via https://www.facebook.com/writewyattuk/ and on Twitter via @writewyattuk. Legally speaking, all content of this blog (unless otherwise stated) is the intellectual property of Malcolm Wyatt and may only be reproduced with permission.
View all posts by writewyattuk →
This entry was posted in Books Films, TV & Radio, Music and tagged Boileroom, Brassneck, Charlie Layton, Danielle Wadey, David Gedge, Everyone Thinks He Looks Daft, Festive Fifty, George Best, guildford, Köln, Kennedy, Magazine, Melanie Howard, My Favourite Dress, Something Left Behind, The Wedding Present. Bookmark the permalink.

3 Responses to The Wedding Present – back at the Boileroom, Guildford