Shelving options: along the writewyatt bookcase

I guess the best fiction takes you on a journey, and in the case of Catching the Sun, Tony Parsons has you making an 8,500 mile trek to Phuket, Thailand.

Not to an all-inclusive honeymoon-friendly world of five-star travel though, but the reality of the everyday struggle for those wishing to ‘live the dream’, and a window on the hard life of the Thai in this island idyll.

It’s been 22 years since my last visit to Thailand, but there’s something of that world I briefly tasted on Ko Samui here, in a beautifully-penned tribute and something of a love note to the hard-working locals who labour around the clock to make these South-East Asian resorts tick.

In Catching the Sun, the Finn family – Tom, Tess and twins Rory and Keeva – leave a troubled UK existence, perpetually looking to make ends meet (something so many of us can empathise with), for a new life in the sun. It’s set in Phuket, but could so easily be Australia, the Med, or wherever you feel your own dream lies. 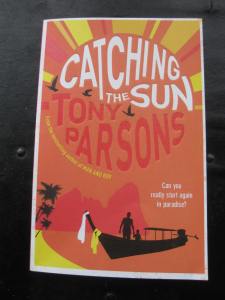 Parsons fans will not need reminding how well he weaves his vignettes of everyday life with high drama to perfectly pace a story we can all relate to. Whether you know Phuket or not, we’ve all experienced that feeling of ‘wouldn’t it be great if we could just stay here?’ The reality can be anything but, of course, yet Parsons lovingly describes what might entice you in the first place. And even in the darkest moments you can appreciate the draw of the beaches and hinterland he paints.

Good drama needs villains, and there are plenty here, again roundly drawn and real, and it is a testament to the author that you’re there with Tom and Tess as they face their uphill battles to get by.

There’s an informed portrayal of the family’s Thai neighbours too, again believable characters, and those who have to scratch a living in this tourist paradise. The descriptions of the Thai holiday nightlife and a resort that never seems to sleep are brought vividly to life, that never-ending throbbing soundtrack from the bars, traffic and daily trading adding to the picture. Yet you also get a feel of the peace that generations of back-packers and independent travellers have coveted about this treasured part of the world since the days of the hippie trails.

The descriptions of the wildlife are also clearly well grounded in the author’s hands-on research – from efforts to free a stranded dolphin to the daily swim for elephants, and the bitter-sweet stories of the gibbons, turtles, the rainforest and the seas as they are exploited for human gain.

There are trademark Parsons scenes where the children – in this case Tom’s son Rory –  are the wise ones, imparting the kind of knowledge the adults are too blind to see, a love of nature finding a true voice as an outlet to educate. And the best teachers are always those who pass on their knowledge without you realising you’re learning.

Back catalogue: Past Parsons in the writewyattuk collection

That way we get to understand more of the dark side of the island’s history and that constant battle between the preservationists and the unthinking locals and tourists, seeking advantage of a natural beauty that should never be taken for granted.

It’s not just nature either, with Parsons giving a non-preachy approach to document the sex industry that gives Thailand such a bad name. For Catching the Sun is every bit a story of temptation as well as opportunity and exploitation.

There’s something of Michael Morpurgo’s brilliantly-drawn Running Wild in here, not least Parsons’ measured, colourful descriptions of the 2004 Boxing Day tsunami that so devastated this part of the world, something that also told us so much about ourselves and our own attitudes to the bigger picture. But for all those wider themes, the heart of this tale lies with the human relationship.

We’ve all known families that have looked to an outside solution in a bid to start afresh and build a better life, and the Finn family have that chance, yet soon realise life’s far from rosy and your baggage always come with you.

But along the way, Parsons’ meticulously-drawn characters and settings take you there among the casuarina trees, the bow-shaped bay, the longtail boats, turquoise waters, and smells and sights of Thai life, in the best tradition of a fine story-teller.

* Catching the Sun by Tony Parsons (Harper Collins, 2012) is available from all good book shops, amazon.co.uk and other leading internet stores

A freelance writer and family man being swept along on a wave of advanced technology, but somehow clinging on to reality. It's only a matter of time ... A highly-motivated scribbler with a background in journalism, business and life itself. Away from the features, interviews and reviews you see here, I tackle novels, short stories, copywriting, ghost-writing, plus TV, radio and film scripts for adults and children. I'm also available for assignments and write/research for magazines, newspapers, press releases and webpages on a vast range of subjects. You can also follow me on Facebook via https://www.facebook.com/writewyattuk/ and on Twitter via @writewyattuk. Legally speaking, all content of this blog (unless otherwise stated) is the intellectual property of Malcolm Wyatt and may only be reproduced with permission.
View all posts by writewyattuk →
This entry was posted in Adventure & Travel, Books Films, TV & Radio and tagged books, Films & TV, reviews, Thailand, Tony Parsons, travel. Bookmark the permalink.