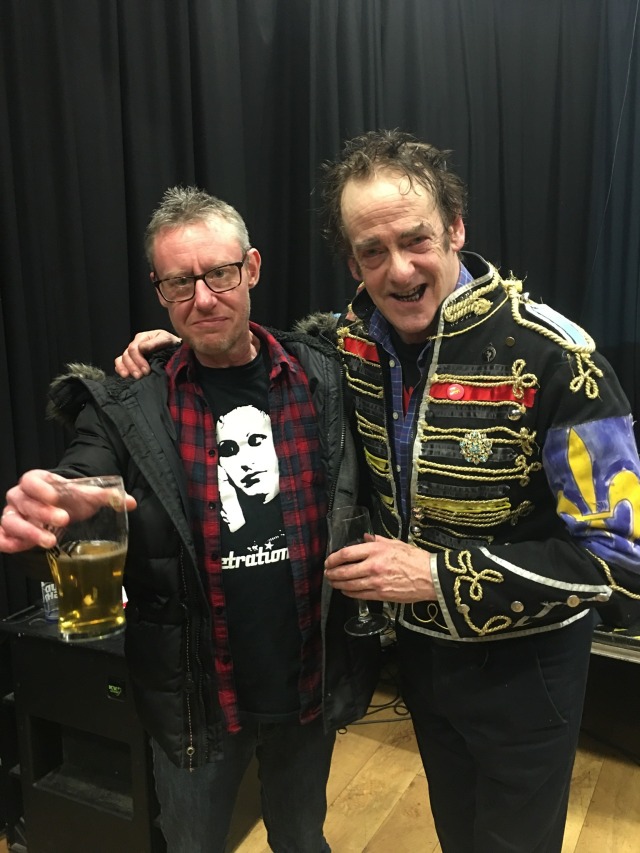 Wünderbar Regulars: Rob Talbot hanging out with with Edward Tudor-Pole at the Conti in late 2019, while Pauline Murray silently questions whether he should get another half in. Swords of a Thousand Men just out of shot.

Rob Talbot reached his 10th anniversary as events organiser at The Continental in Preston, Lancashire, in 2019, and clearly still retains his initial passion for that role, long after a second career switch.

“I was working as a teacher, thoroughly miserable, saw this come up and just went for it. I was teaching secondary school English in Blackburn, and was a supply teacher before that. But I’ve always been a music fan.

“When I got the job there weren’t really any gigs going on. It was more about promotion of the venue in general. But it sort of morphed into that, building up that side.”

It certainly has, a host of happening and cult acts, fairly big and not so big names featuring since. I was relatively slow to the party, based a few miles down the road, knowing the South Meadow Lane venue chiefly as a quirky watering hole on the banks of the River Ribble, handy for a bike ride into town via the Old Tram Bridge and taking in the wonders of the adjoining Avenham and Miller parks.

It wasn’t until influential post-punk outfit Wire visited in the summer of 2013 that I checked out the main concert hall. But many more visits soon followed.

My main link came through Rico La Rocca’s John Peel tribute shows, featuring various under-sung acts who featured at some stage or other in sessions commissioned by the legendary BBC Radio 1 presenter.

It wasn’t just about indie and post-punk, but the avant garde, psychedelia, folk and emerging pop too. And much more besides.

In 2019 alone I marvelled at acts as diverse as Penetration and The Rutles, and WriteWyattUK favourites The Wedding Present played memorable back-to-back nights there in 2017.

Cash Customer: Rob Talbot gets confrontational at the Conti with 999 frontman Nick Cash

Rob – you’ll spot him on the desk by the venue’s back room most nights, or nipping outside for a crafty cigarette – lived fairly close when he got the job, in Ashton-on-Ribble, and is these days not so far off in neighbouring Penwortham. And was quick to praise those he’s worked alongside over the past decade.

“It’s mostly me, although other people do feed in. It’s my nine-to-five and a bit more besides, with evenings.”

And that’s an understatement, I reckon.

According to his blog, he’s also a ‘bookworm and film addict’, as those who know him personally and follow his social media posts know well.

Rob is also a published non-fiction writer and is ‘heading towards’ publishing his debut novel at present, at the negotiating deals stage, writing in the horror genre. He also writes articles for Scream! The Horror magazine.

But back to the main day and night job – what were his 2019 Conti highlights?

“Probably Acid Mothers Temple, who I’ve wanted to have here for a while.  Also, the Damo Suzuki show, which marked 10 years of gigs at the Conti, with quite a few bands on, samba drummers and all sorts. It felt like quite an event and showed how far we’d come in those 10 years.”

Visible Girl: Pauline Murray, in action at The Continental in 2019 with the mighty Penetration (Photo: Gary M Hough)

Quite a coup. Have you been a Can fan for a long time?

“I’ve always been quite psychedelically-minded. The whole programme here – and it’s obviously not all for me! – is to try and do something for everyone … within reason, y’know.”

There’s certainly a broad church of tastes catered for, taking us on to the recent sad news that former Bonzo Dog Doo-Dah band creator and Monty Python musical member Neil Innes, who appeared at the Conti with his cult Beatles parody band, The Rutles in late May, had died. A real shock.

“It was, and there were plans for them to return this year. He seemed to be in fine form.”

Before retraining as a teacher, Rob was an office worker, the first of his ’life-changing’ moves following at the University of Central Lancashire, studying for a PGCE. I guess he was writing in his  spare time though.

“Pretty much. I’ve always been doing something like that. I used to do art and comic strips quite a while back, but writing’s taken over really.”

And that was following your parents’ lead, wasn’t it?

“Yeah, my Dad’s a writer/artist, and my Mum’s a writer, and recently they’ve been working on novels together.” 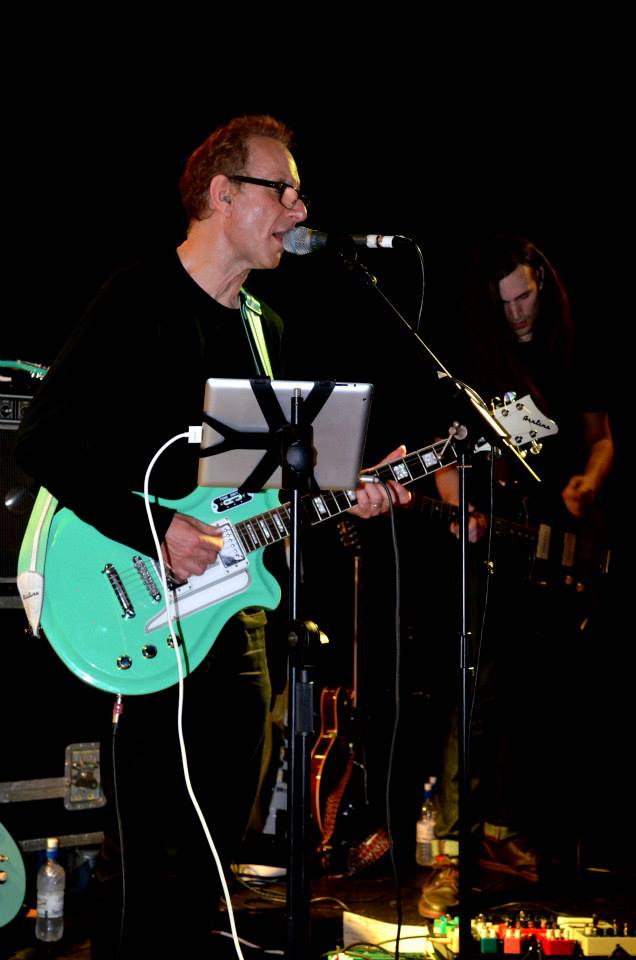 Colin Calls: Wire’s Colin Newman in action at The Continental in 2013 on a hot summer’s night (Photo: Richard Nixon)

His folks hail from Wigan but Rob grew up in Preston, with his parents based in Sunderland since the mid-1990s, his Mum working at the university there.

Married and with two teenage daughters, what would 47-year-old Rob see as most important about local venues in these penny-pinching days of austerity and changing social patterns, when so many pubs and clubs have closed or are under threat?

“It’s something for people in the community to go out and do, particularly at the weekend, and not something corporate. It’s not about going to some faceless venue, buying a can of Carling Black Label and just seeing a band from a distance.

“You’re just here, they ‘re right in front of you, and you can say hello afterwards. People love that.”

That’s certainly true when it comes to the CAMRA-award-winning Conti, which has a charm of its own. In a sense it’s not just one venue either – it boasts a snug bar too, also used for music and arts events, as well as inside and outside areas to socialise in a setting with a real community vibe. Blimey, best stop there. This is starting to sound like an advertorial. Help us out, Rob.

”There’s a different vibe completely in the snug, and it’s good that we can do proper gigs of a decent size and everyone can enjoy it. I talk to a lot of regulars who come to the gigs and it’s almost like they’ve got a stake in the place. They love it, and they’ll take a chance on some things that normally they probably wouldn’t, but they do because it’s here.”

And you continue to mix things up a bit, with regular open mic. and snug sofa sessions, classic album nights, and so on.

“Yeah, those are just things we try to push, and they’re free as well, which encourages people to get out and get involved.”

I seem to recall a writers’ group meets down there.

“There is – a creative writing group I wish I’d been to but never have. And a local poetry group, and a book club that meets once a month.”

I guess over the past decade you’ve seen a fair few big names pass through and smaller acts on their way to making a name for themselves?

“Yes, Rae Morris springs to mind, and quite a few others, and I’ve seen a lot who deserve to be bigger.”

I caught him on the hop there, but as well as Atlantic Records’ Rae there have been bookings for Ezra Furman, The Monochrome Set, Deaf School, The Magic Band, Fat White Family, Mike Peters, The Troggs, Evil Blizzard, The Lovely Eggs, The Loft, King Creosote, John Bramwell, A Certain Ratio’s Jez Kerr, Viv Albertine and Nick Harper.

A fair few of the above are on that ‘how the hell did I miss that?’ list. And you can add to that a few I did catch, like Rose McDowall, The Orchids, The Chesterfields, King Champion Sounds, Josienne Clarke & Ben Walker, The Membranes, The Common Cold, Datblygu, Eton Crop, The Nightingales, Deutsche Ashram, The Folk Devils, and The Wolfhounds, and a few more I – again – somehow missed, like Trembling Bells, The Mekons, The Three Johns, Lydia Lunch, Thurston Moore, Senser, Justin Sullivan … I’ll stop there. Which bookings have given Rob the biggest thrill?

“Probably a punk band like Discharge. They were my early 20s. Also, Nik Turner from Hawkwind. There was quite a geeky buzz from that. And he’s been back a few times.”

And what would you say remains your dream future booking?

“I’d love to put on The Damned. They’re a little too big for us, but who knows. I’m hoping word gets back to them via the punk circuit about how great a place this is to play.”

You have at least one classic late ‘70s punk bands coming this April, with WriteWyattUK faves The Members playing.

“I’m looking forward to that. And there are a few punk gigs I haven’t announced yet, including Anti-Pasti, plus TV Smith and The Vibrators on a double-bill, the UK Subs later in the year, Anti-Nowhere League coming back, Attila the Stockbroker coming back with a full band … quite a few things going on.”

Booking Now: Rob Talbot has a moment away from the day and night job, The Continental, Preston, Lancashire

For more about Rob’s writing, head to his website. And to find out what’s coming up at The Continental in Preston, Lancashire, try here.

A freelance writer and family man being swept along on a wave of advanced technology, but somehow clinging on to reality. It's only a matter of time ... A highly-motivated scribbler with a background in journalism, business and life itself. Away from the features, interviews and reviews you see here, I tackle novels, short stories, copywriting, ghost-writing, plus TV, radio and film scripts for adults and children. I'm also available for assignments and write/research for magazines, newspapers, press releases and webpages on a vast range of subjects. You can also follow me on Facebook via https://www.facebook.com/writewyattuk/ and on Twitter via @writewyattuk. Legally speaking, all content of this blog (unless otherwise stated) is the intellectual property of Malcolm Wyatt and may only be reproduced with permission.
View all posts by writewyattuk →
This entry was posted in Books Films, TV & Radio, Comedy & Theatre, Music and tagged Acid Mothers Temple, Anti-Nowhere League, Anti-Pasti, Attila the Stockbroker, Discharge, Hawkwind, John Peel, lancashire, Neil Innes, Nik Turner, Preston, Rae Morris, Rico La Rocca, Rob Talbot, Scream! The Horror, Tenpole Tudor, The Continental, The Damned, The Members, The Rutles, The Vibrators, TV Smith, UK Subs. Bookmark the permalink.